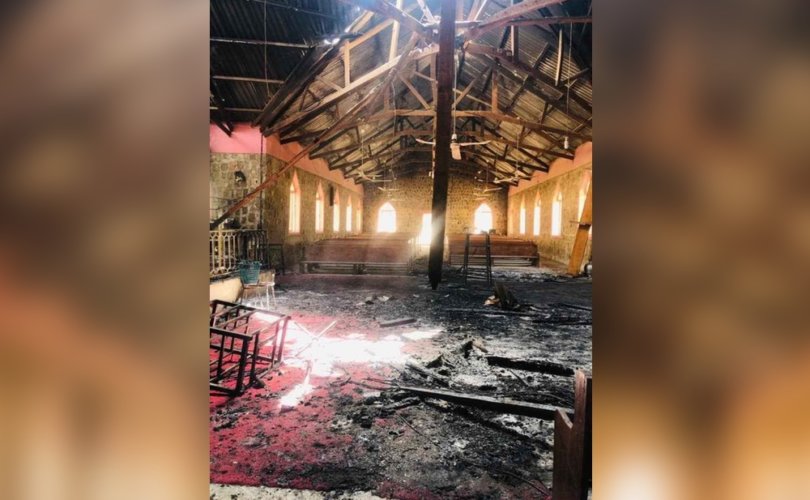 NIGERIA, February 25, 2020 (LifeSiteNews) – A group of reportedly more than 100 militant terrorists, believed to be members of the Islamist Boko Haram group, have attacked a town in northeast Nigeria, burning churches and other buildings and forcing residents to flee the area.

Reports on the attack are conflicting with some claiming that “many” people were killed and others reporting unconfirmed abductions. A Nigerian military official has said that the attack recorded the death of a single soldier, with no loss of life of any civilian. Various reports suggest that residents were disappointed by the response of the military and police.

The attack took place on Friday evening in Garkida in the Gombi area of the northeastern state of Adamawa, just as women were arriving for an annual Catholic Women's Conference. The area has suffered attacks in the past by Boko Haram and the region has been under a military state of emergency since May 2013.

The militants apparently arrived with about 60 motorbikes and 20 mounted gun trucks, armed with automatic assault rifles and grenade launchers.

At least five churches were destroyed, including a missionary church soon due to celebrate its 10- year anniversary, belonging to the Church of the Brethren.

One Twitter user posted an image of four men attending the church for worship on Sunday, despite the damage done to the building.

Four of the members had Sunday service in the burnt out building.

Someone should tell Boko Haram that,

The Church is NOT the Building! The church is the body of Christ, of which He is the head. We are the Church! pic.twitter.com/qZaehnxloL

The Christian Post reports, “Nigerian security forces initially fought with the attackers but had to retreat for reinforcement. The militants then advanced to neighboring towns and carried out attacks. Civilians fled to a nearby mountain area and into bushes.”

Earlier on Friday, the Nigerian chief of army staff had written to troops in the northeast, expressing his confidence that they will end Boko Haram’s insurgency soon.

The president of the Nigerian Catholic bishops’ conference recently called on Western nations to “make known the atrocities” inflicted upon Christians and other groups in Nigeria by Islamic terrorists.

The Catholic bishops in Nigeria say that the government is complicit in the murder of Christians in the country and that they do not do enough to help communities under attack.

Femi Fani-Kayode, the former Nigerian Minister of Culture and Tourism and Minister of Aviation, said earlier this month that former U.S. President Barack Obama and former U.S. Secretaries of State Hillary Clinton and John Kerry have “blood…on their hands” for the role they played in helping to elect the current Nigerian government.

“What Obama, John Kerry and Hilary [sic] Clinton did to Nigeria by funding and supporting [Muhammadu] Buhari in the 2015 presidential election and helping Boko Haram in 2014/2015 was sheer wickedness and the blood of all those killed by the Buhari administration, his Fulani herdsmen and Boko Haram over the last 5 years are on their hands,” Fani-Kayode stated in a February 12 Facebook post. Fani-Kayode dod not clarify what part Clinton, who was U.S. Secretary of State only until 2013, may have played in Buhari’s election.

In support of his claims Fani-Kayode cited a recent interview from a former military contractor Eeben Barlow whose company was hired to eradicate Muslim terrorists from Nigeria. In the interview, Barlow says that one of the first acts of the then-new President Buhari in 2015 was to terminate his contract. He also said that Buhari’s presidential campaign was funded by the U.S. government under Obama.

Nigeria is the 12th worst country in the world for persecution of Christians, according to Open Doors USA’s 2020 World Watch List. In 2018, President Donald Trump promised that his administration would work “very, very hard” to end the mass killing of Christians in Nigeria.