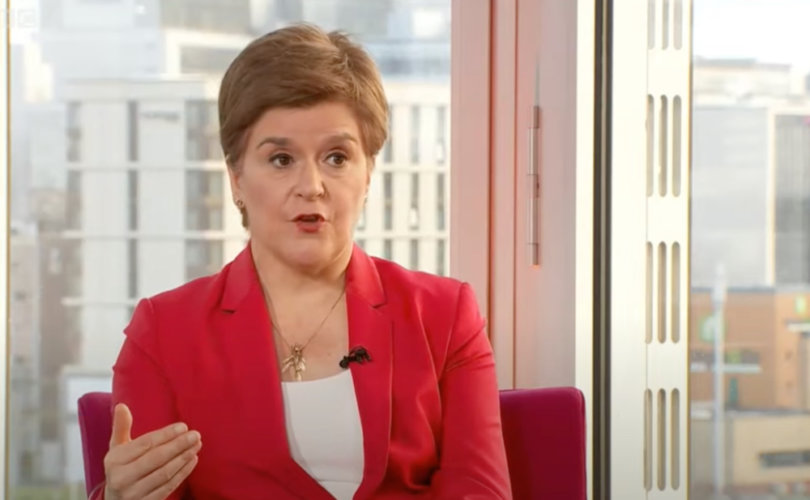 EDINBURGH, Scotland (LifeSiteNews) — Scottish First Minister Nicola Sturgeon has called for Scots to continually test themselves for COVID-19 “before mixing socially,” as fear and restrictions over the omicron variant of the virus is promoted throughout the U.K.

Speaking at a press conference Monday, Sturgeon outlined her new guidance for Scots in light of the omicron variant of COVID-19.

“At this stage we are asking people to significantly step up and increase compliance with all existing precautions,” she declared, accusing Scots of having “slipped up” in their adherence to her restrictions on daily life and freedoms.

“So on any occasion that you are intending to socialise or mix with people from other households — whether that is in a pub, a restaurant, a house or even a shopping centre — please do an LFD test,” ordered Sturgeon.

“If the test shows up positive, do not go out,” she said. “Instead, get a confirmatory PCR test and self isolate until you get the result of that.”

“We’re also reminding people to work from home,” she added, describing it as a time for “collective national vigilance.”

Since they were made merely at a press conference, Sturgeon’s comments do not carry any weight of the law, but further restrictions in Scotland are expected to be announced in the coming days.

Speaking in the Scottish Parliament just days earlier, Sturgeon explained how Scotland’s vaccine passport scheme had as “one of the primary objectives” the aim of “driv[ing] up vaccination rates.”

Responding to comments from opposition parliamentarians about why testing results were not added to the “vaccination certification” scheme earlier, Sturgeon said that to have done so “would have undermined the central, primary objective of the scheme,” namely to increase the shot uptake.

The current vaccine passport scheme prevents unvaccinated individuals from accessing nightclubs or large events, but from December 6 proof of a negative lateral flow test will also be registered on the app.

Scotland followed Ireland in rolling out a vaccine passport scheme, with Wales having also implemented a similar protocol, and Northern Ireland to implement such plans within days.

“There is a huge amount that we do not know about the variant,” Sturgeon told the media on November 29, before promoting the hastily developed abortion-tainted COVID shots as an effective way to combat the virus.

“I know there is a concern that the vaccines might be less effective against Omicron than against other variants. We don’t know yet if that’s the case, but even if it is getting vaccinated will still matter,” declared the First Minister.

“Less effective does not mean ineffective. You will still be much more protected with vaccines than you will be without. So if you could be fully vaccinated right now and you have chosen not to be, you are putting your own life at risk.”

Meanwhile, the South African doctor who is reported to have raised the alarm of the omicron variant, Dr. Angelique Coetzee, stated that the symptoms were “so different and so mild,” compared to those she had seen before.

Dr. Coetzee, the chair of the South African Medical Association, added that “even the patients that we have seen who are not vaccinated have mild symptoms.”

“I’m quite sure … a lot of people in Europe already have this virus,” she added, decrying the “storm in a teacup” of travel bans over a strain of the virus which was currently leading to “very mild cases.”

In line with Prime Minister Boris Johnson’s recently announced travel restrictions, any arrivals into the U.K. will now have to take a PCR test on day two after their arrival, and self-isolate until a negative result is produced. Travel to South Africa and surrounding countries has been restricted, with the U.K. adding 10 countries to its “red list,” meaning that travellers arriving back will need to stay in a government-approved quarantine hotel for £2,285 each.