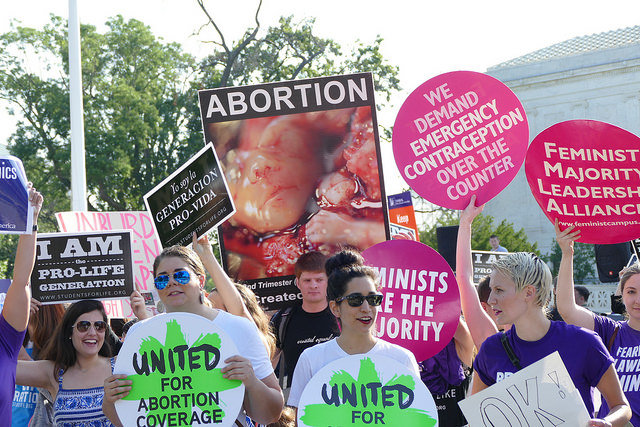 Pro-abortion advocates stand in front of and next to a picture of a baby killed by abortion.

TEXAS, November 30, 2016 (LifeSiteNews) – Starting December 19, Texas abortion facilities will no longer be allowed to throw aborted babies' bodies in landfills or down the garbage disposal. Instead, they will be required to bury or cremate them.

The Texas Department of Health and Human Services proposed the rules in July. They were finalized Monday despite opposition from abortion supporters.

The rules will apply to hospitals and abortion centers but not to women who carry out chemical abortions in their homes. The rules will also not apply to babies miscarried at home.

In one video, Dr. Amna Dermish, a Planned Parenthood late-term abortionist in Austin, said that the goal of harvesting intact fetal heads will “give me something to strive for.”

In another, Planned Parenthood Gulf Coast's Melissa Farrell in Houston explained that harvesting “intact fetal cadavers” was “just a matter of line items” for the abortion giant.

Now, instead of being able to profit from aborted babies' bodies, Texas abortion centers will have to pay to have them cremated or buried. The HHS department has said the cost of burying or cremated aborted babies will be no more than what abortion facilities already pay to dispose of them as “medical waste.”

“The new law honors the humanity of each child and gives the baby the dignity he or she deserves,” Students for Life of America President Kristan Hawkins told LifeSiteNews. “It’s no surprise the abortion industry is adamantly opposed to this law. They would rather sell those body parts for money or find some other non-humanitarian way to dispose of the remains. We hope that this law helps our nation to see the humanity of the child in the womb and also helps women who are contemplating abortion to understand more fully the unique gift of a child.”

The new rules “further shame and stigmatize patients seeking productive healthcare in the state,” the pro-abortion Center for Reproductive Rights wrote in a letter suggesting that they would likely take the regulations to court. The abortion advocacy group pointed to Whole Woman's Health v. Hellerstedt, the June Supreme Court case that overturned Texas abortion facility health and safety standards, in asking the state to withdraw the rules.

Abortion advocates reacted angrily to the finalization of the rules, using Twitter to express their outrage at “Christo-facists” and encourage women to “dump the ashes” on the steps of the state capitol. They also claimed that women, not abortion facilities, will have to pay for the burial or cremation. This is something Texas health officials have clarified will be the responsibility of the abortion center.

If you live in Texas and can't afford cremation for an abortion, I will personally pay for it if you dump the ashes on the TX capitol steps.

The new abortion law in Texas is absolutely disgusting and this is just the beginning. I hope all the Christo-fascists are happy.

If a woman “loses or terminates… Outside her home” who's moving to Texas w/ me to a start mobile abortion service? https://t.co/KQeT952DNA