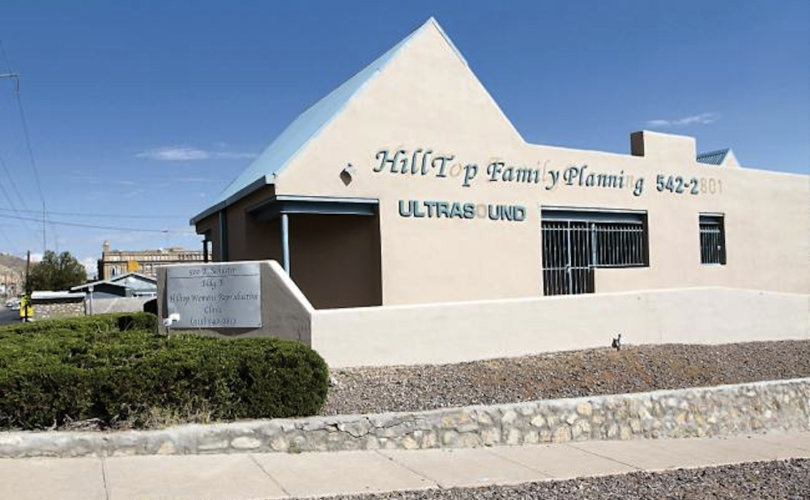 Hill Top Women's Reproductive Clinic in El Paso, Texas, referred a teen girl for an abortion to its facility in New Mexico, where parental consent is not required.

NEW MEXICO, June 5, 2017 (LifeSiteNews) – A recent undercover call to a Texas abortion facility revealed it referred an underage girl to its sister facility in New Mexico so that she could obtain an abortion without parental involvement.

The undercover caller first contacted Hill Top Women’s Reproductive Clinic in El Paso, Texas. Upon learning she's 15 and doesn't want her parents to know about the abortion, the abortion center referred her to its “Santa Teresa location.”

“You don't need your parents' consent,” a New Mexico Hill Top employee told the investigator posing as a minor. “It's going to be $430. You can pay cash. We take Visa, MasterCard, Discover.”

“[Abortionist] Franz Theard is enabling sexual predators when he purposefully takes advantage of New Mexico’s lack of common sense laws and circumvents the reasonable limitations of Texas,” said Tara Shaver of Abortion Free New Mexico. She said this tape is “only a glimpse inside of Franz Theard’s shoddy abortion operation that has creeped into New Mexico.”

Shaver noted Theard “has a sordid history of abortion violations” and delivers babies on days he's not aborting them.

In the early 2000s, the El Paso Hill Top facility was fined $5,350 for, among other offenses, “failure … to ensure that abortions were not performed on female minors without parental notification or consent.”

He is “living a double life in his practice by working in Texas hospitals delivering babies while simultaneously killing babies in both Texas and New Mexico,” said Shaver. “Theard has betrayed true medicine and is currently capitalizing on New Mexico’s lack of the most basic laws regulating abortion.”