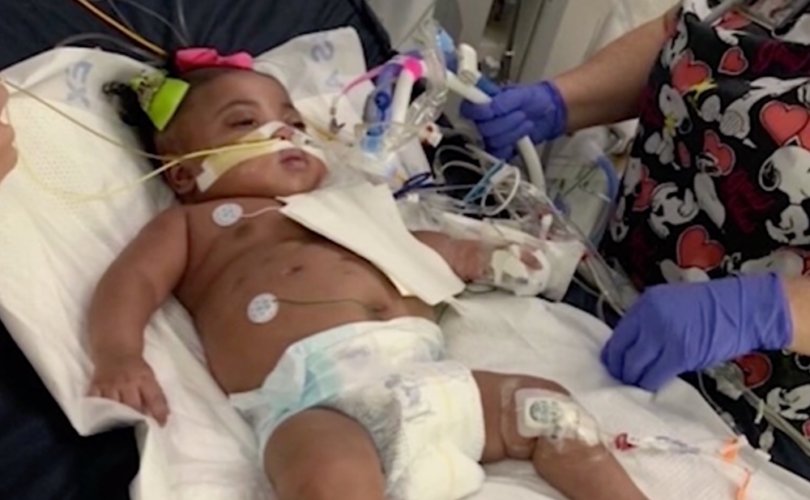 FORT WORTH, December 13, 2018 (LifeSiteNews) – The Texas Catholic Conference of Bishops and a pair of state “pro-life” groups have filed an amicus brief against a Texas family’s effort to save their baby girl from being taken off life support.

Tinslee Lewis was born prematurely and has spent her entire life so far at Cook Children’s Medical Center in Fort Worth, where she has undergone various intensive surgeries for a heart defect, lung disease, and severe chronic pulmonary hypertension. Doctors concluded in October that the ten-month-old was beyond saving, and declared their intentions to take her off life support.

With the help of Texas Right to Life, Tinslee’s parents obtained and renewed a restraining order against the move. Texas Attorney General Ken Paxton has also filed a brief to help save the little girl.

But the Texas bishops have joined Texas Alliance for Life and Texans for Life Coalition with an amicus brief taking the hospital’s side, Church Militant reports.

The Dec. 11 friend-of-the-court brief stated to the court that the groups involved are “dedicated to a variety of goals, including preserving the integrity of the medical profession, ensuring high-quality medical care, promoting medical liability reform, protecting life, assuring dignity at the end of life, and protecting Texans with disabilities.”

“These diverse groups are united in the view that the Texas Advance Directives Act, TEX. HEALTH & SAFETY CODE ch. 166, helps achieve their essential objectives,” the introduction to the brief stated.

At no point was it stated that the groups who filed the brief were interested in safeguarding parental rights from being usurped by a heavy-handed state/medical authority.

In their own brief, the Texas Catholic Conference of Bishops (TCCB) stated: “TCCB has sought reforms in advance directives to highlight—as a matter of policy—the dignity inherent in a natural death.”

The bishops then quoted a portion of their document on Medical Advance Directives: “Human intervention that would deliberately cause, hasten, or unnecessarily prolong the patient’s death violates the dignity of the human person.” The italicization of “unnecessarily prolong” was not in the bishop's original document but was formatted by them this way for the amicus brief.

Concluded the bishops: “While the TCCB supports continued legislative improvements to the act, the TCCB generally supports the framework of §166.046 as a balanced dispute resolution process that respects patient dignity and healthcare provider conscience.”

The core issue that Tinslee’s case revolves around is the 1999 Texas Advance Directives Act (TADA), which lays out a process for resolving disputes between doctors and patients (or patients’ representatives) regarding whether to continue or withhold life-sustaining treatment. The law was enacted as a middle ground on end-of-life issues, but pro-life critics argue that its “balance” is overwhelmingly in hospitals’ favor, with ethics panels having little transparency and no appeal process, and patients subject to their judgment even when not terminally ill.

The controversial part of the Act is Section 166.046, the section mentioned by the bishops in their brief. It states that if a doctor gives notification of his refusal to further treat a patient (even against the wishes of any existing patients directive), gets approval from a committee — and no other doctor agrees to take in or help the patient — then the hospital is only obligated to provide up to ten days of care before any life-sustaining treatment (which includes dialysis) is removed from patients suffering from a terminal illness.

The brief, which was also joined by several state medical groups, defends TADA on both ethical and practical grounds. “A medical intervention that could further prolong life can also, directly or indirectly, inflict significant suffering without proportionate benefit to the patient,” it argues. This can cause conflict between a doctor’s medical judgment and a family’s wishes, and TADA facilitates and resolves such conversations.

Church Militant notes that in Tinslee’s case, the withdrawal decision was made not due to a fatal condition, but because the Cook Children’s ethics panel concluded her “quality of life” was not worth continuing – a judgment her mother strenuously disputes.

The Daily Mail reports that her mother Trinity Lewis testified that despite living on a ventilator, Tinslee is a “sassy” girl capable of enjoying cartoons and toys, and conveying her likes and dislikes, including which nurses are her favorite.

This is not the first end-of-life case in which the Texas Catholic Conference of Bishops has backed hospital officials over families. The conference filed a similar brief defending TADA in March, in the case of doctors who wanted to remove former EMT Chris Dunn’s feeding tube against his mother Evelyn Kelly’s wishes.

Onlookers shouldn’t be surprised or impressed by the bishops’ status as Catholic authorities, Texas Right to Life president Jim Graham argued at the time: “When you have many of the Texas bishops voting three, four, 10 times in the last Democratic primaries, so it’s kind of become an arm of the progressives.”

Pro-life groups including National Right to Life Committee, Texas Right to Life, Concerned Women for America, and more are currently backing legislation by Republican state Sen. Bryan Hughes and Democrat state Rep. Richard Raymond to better protect parents, including by repealing TADA’s 10-day deadline for finding a willing doctor to which patients can be transferred.

Texas Right to Life is also calling on Republican Gov. Greg Abbott to convene a special legislative session to repeal the 10-day rule.