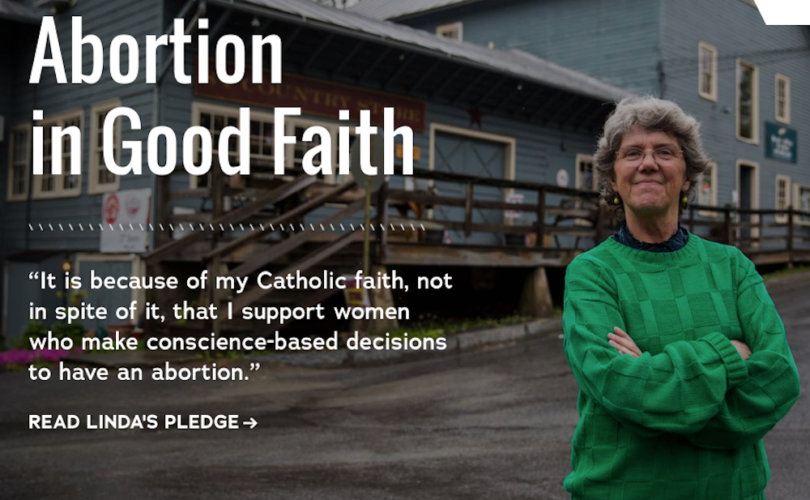 Catholics for Choice’s ad contained “inaccurate information which must be corrected, since it misrepresents the truth and what the Catholic Church believes and teaches,” the Archdiocese of San Antonio posted on its website the same day the ad appeared.

“This misrepresentation is demonstrated by their statement that ‘Public funding for abortion is a Catholic social justice value,’” the statement continued. “Nothing could be further from the truth.”

The Archdiocese stressed that the dissident group, which is funded by leftist billionaire George Soros, “does not speak for the Catholic Church.” When it undertook a similar media campaign in Colorado two years ago, the state’s bishops opposed it.

“For more than 2,000 years, the Church has steadfastly proclaimed that respect for all human life at every stage is foundational to the Catholic faith,” the Archdiocese explained. “Abortion from the earliest tradition of the Church has been considered immoral.” The statement pointed to the magisterial document Donum Vitae (“The Gift of Life”) as one example of this.

“It is our hope that one day Catholics for Choice will take the time to acquaint themselves with basic Catholic teachings, and acknowledge the truth of the Catholic faith, and not choose to misrepresent her teachings with false and inaccurate information and ads that only work to confuse and mislead the public,” the statement concluded. “Upholding the sacred dignity of all human life is the duty of every member of society and this duty must be taken seriously in order to ensure that we are a part of a culture that affirms the right to life for all, especially the most vulnerable among us.”

Gustavo García-Siller, M.Sp.S., is the Archbishop of San Antonio.

Houston-based Bishop Steven J. Lopes of the Personal Ordinariate of the Chair of St. Peter, a group of Anglicans who were brought into full Communion with the Catholic Church while being allowed to retain some of their customs, said, “The biggest falsehood in these advertisements is the statement that ‘as a Catholic’ a person can respect and support a decision to kill an unborn person. The insinuation that Catholic faith can lead a person to sanction something which is always and everywhere a moral evil is fraudulent, deceitful, and simply wrong.”

The Catholics for Choice ad appears to have been part of its new national “In Good Faith” campaign, which encourages people to pledge to support taxpayer-funded abortion because — not in spite of — their supposed Catholic faith.

In newspapers across the US, Catholics pledged their support of abortion funding #InGoodFaith. Join them. https://t.co/qogSVekAq3

For the first time in history, the 2016 Democratic party platform supports repealing the Hyde Amendment, which prohibits public funding of abortions. Democratic Vice Presidential nominee Senator Tim Kaine, who claims to be a “devout Catholic” yet has a 100 percent voting record in the senate and supports same-sex “marriage,” and the Clinton campaign have made conflicting statements about whether Kaine supports repealing the Hyde Amendment.