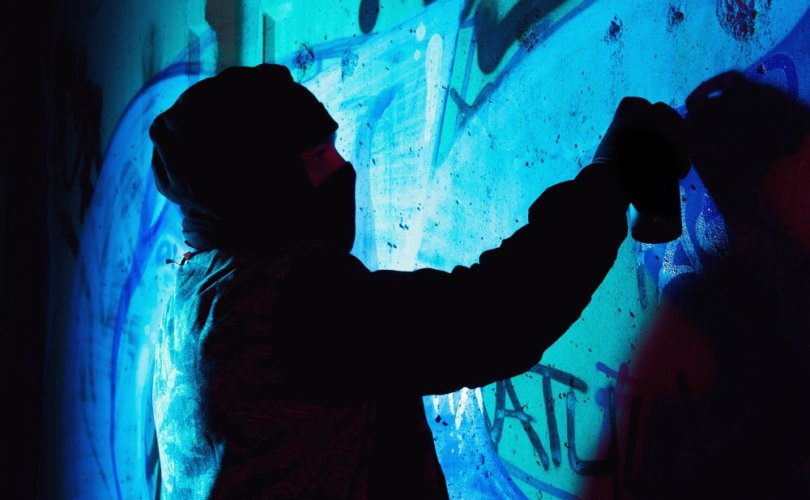 HOUSTON (LifeSiteNews) — A Catholic church in Texas was vandalized Sunday after pro-abortion activists publicly called for protests at Catholic churches on Mother’s Day.

The words “Pro-choice is pro-life” were spray-painted on the front doors of Holy Rosary Catholic Church in Houston on Sunday night, according to the parish Facebook page.

“This is what the angry, hateful anti-Catholic pro-choice activists did to our church doors last night,” wrote Friar Mariano D. Veliz, O.P., on the social media platform.

“The choice to murder unborn babies is not pro-life,” he wrote, calling on supporters to “Pray for an end to this evil” and closing his post with: “In Christ with Blessed Mary.”

In a later update to the original post, Veliz added that the “same message” which was painted on the front doors of the church had also been spray-painted on its side doors, which he had not initially seen.

Guess I spoke too soon…

Holy Rosary secretary Dianne Gongora told LifeSiteNews on Monday the parish filed a report with the Houston Police Department (HPD) regarding the incident.

HPD public information officer Victor Senties affirmed in a phone call that the department took a report of the vandalism Monday morning and is in the early stages of investigating. Senties said the vandalism is estimated to have occurred between 9 and 11 p.m. May 8.

“[P]ro-abortionists show their true colors by sneaking around in the middle of the night, vandalizing sacred places, and stealing the blessed sacrament,” a parishioner of Holy Rosary named Lawrence told LifeSite via social media Monday.

“The fact that the city of Houston seems to have little interest in protecting Catholics from targeted harassment is a crying shame,” he added. “Catholics should defend the House of God and the Body of Christ from those who defend the murder of our society’s children.”

I wish this was still true. My parish was vandalized and another parish in my city has its tabernacle stolen. Please pray. https://t.co/ajeRxAv4bh

Holy Rosary, which is part of the archdiocese of Galveston-Houston and is staffed by Dominican friars of the Province of St. Martin de Porres, serves a large parish community and offers six Masses, including a Latin Mass, every Sunday.

While it’s unclear who vandalized the church, the graffiti appeared on Mother’s Day, the day pro-abortion activists affiliated with the group “Ruth Sent Us” had encouraged those opposed to protections for the unborn to “[s]tand at or in a local Catholic Church” to protest the potential overturning of Roe v. Wade, the 1973 U.S. Supreme Court ruling that established a federal “right to abortion” throughout all 50 states.

Whether you’re a “Catholic for Choice”, ex-Catholic, of other or no faith, recognize that six extremist Catholics set out to overturn Roe. Stand at or in a local Catholic Church Sun May 8. #WarOnWomen #MothersDayStrike pic.twitter.com/v2vtpd12Gp

Activists like those associated with Ruth Sent Us, which was named for the late pro-abortion Supreme Court Justice Ruth Bader Ginsburg, have ramped up their efforts after the unprecedented leak of the Supreme Court’s majority opinion draft in the crucial Dobbs v. Jackson Women’s Health Organization case last week.

Dobbs concerns Mississippi’s ban on abortion after 15 weeks’ gestation, which has inspired a bevy of similar pro-life laws in Republican-led states nationwide.

According to the leaked draft opinion, whose authenticity was later confirmed by Justice John Roberts, the Supreme Court is angled to rule in favor of Mississippi by overturning both Roe v. Wade along with Planned Parenthood v. Casey (1992), which upheld Roe.

After the leak of the document, Ruth Sent Us published the home addresses of six pro-life Supreme Court justices’ on their website and called for pro-abortion protests at Catholic churches.

Pro-abortion activists have subsequently protested outside the homes of the Supreme Court justices in an effort to sway the opinion of the Court to uphold Roe, and targeted Catholic churches and pregnancy centers over Mother’s Day weekend.

Holy Rosary in Houston wasn’t the only Catholic church in the Lone Star State to be targeted this past weekend. St. Bartholomew Catholic Church in nearby Katy, Texas, was also attacked Sunday.

St. Bartholomew’s pastor, Father Christopher Plant, said in a Monday tweet that the church’s tabernacle had been stolen the previous night, noting that law enforcement officers are currently investigating the theft.

“Please pray for us and for those who committed this criminal sacrilege,” Fr. Plant wrote, encouraging anyone with information to contact the parish office.

Our tabernacle was stolen last night. We don’t know who did it but the police are investigating. Please pray for us and for those who committed this criminal sacrilege. If you have any information that can help in the investigation, please call our office: 281-391-4758

Meanwhile, in Denton, Texas, pro-life pregnancy center Loreto House was vandalized with pro-abortion graffiti reading: “Not a clinic” and “Forced birth is murder.”

Before the reported vandalism and theft in Texas, Ruth Sent Us had lashed out at Catholics for their “weaponized prayer,” saying the radical pro-abortion activists would “remain outraged after this weekend” and promising that they will “be burning the Eucharist to show our disgust for the abuse Catholic Churches have condoned for centuries.”

LifeSiteNews reached out to the office of Houston Mayor Sylvester Turner for a statement regarding the vandalism of Holy Rosary Catholic Church but has yet to hear back.

Anyone with information about the incident is asked to contact the Houston Police Department at (713) 884-3131.