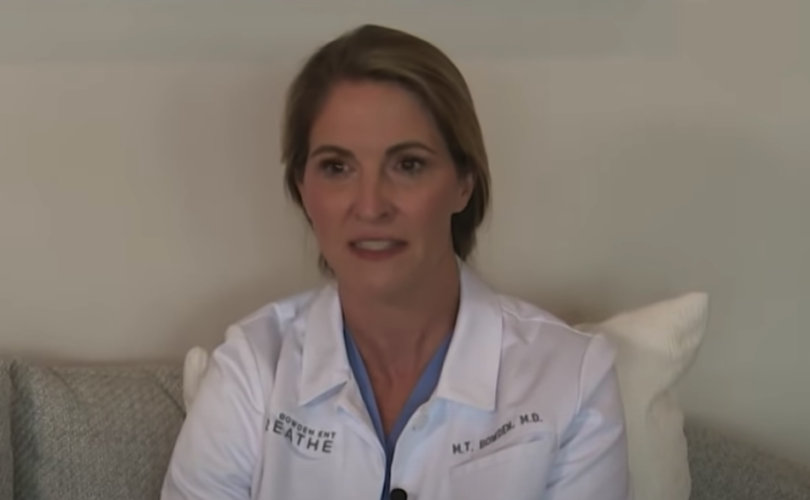 HOUSTON (LifeSiteNews) – A Houston doctor resigned from one of Texas’ largest hospitals after being suspended for backing ivermectin as a COVID treatment and denouncing vaccine mandates.

Dr. Mary Bowden, a private-practice ear, nose, and throat doctor trained at the Medical College of Georgia, was temporarily suspended from Houston Methodist earlier this month after repeatedly speaking out about the benefits of ivermectin for COVID patients. Bowden has said that she has treated 2,000 people for COVID-19, in some cases using the drug, and that none of her patients have been hospitalized.

“Ivermectin might not be as deadly as everyone said it was,” she tweeted November 10. “Speak up!”

Ivermectin might not be as deadly as everyone said it was. Speak up! https://t.co/r9Ac5zFSvo

Bowden has also criticized COVID vaccine mandates and announced in a recent post that she is “shifting my practice focus to treating the unvaccinated.”

Houston Methodist said in a November 12 Twitter thread that Bowden’s opinions “are harmful to the community” and referred to them as “dangerous misinformation which is not based in science.”

Dr. Bowden, who was informed about her suspension by a reporter for the Houston Chronicle, resigned last Monday. In a letter explaining the move, she said that Houston Methodist’s accusations that she spread “dangerous misinformation” are “false and defamatory.”

“During the past two years, I have worked hard to provide early treatment for victims of COVID-19. My efforts have been successful. I have treated more than 2,000 COVID-19 patients, including many with comorbidities, and none of these patients have required hospitalization. This is a testament to the success of my treatment methods,” she wrote.

“I do not spread misinformation, and my opinions are supported by science. There is substantial evidence for the efficacy of ivermectin in treating COVID-19 and no evidence for serious or fatal side effects associated with the doses used to treat for COVID-19.”

She added that many of her patients have used the drug with other therapies as part of successful recovery regimens. “I believe that if more physicians had focused on early treatment, many COVID-related deaths and hospitalizations could have been prevented,” she said.

Several studies have shown that ivermectin, a generic drug with virtually no risk of serious adverse effects, can effectively treat COVID-19. Regulators and drug makers have aggressively suppressed the widely-used medication, though leading experts, like RNA vaccine inventor Dr. Robert Malone and hundreds of doctors, have endorsed it as a COVID treatment.

Bowden noted in a press conference last week that she thinks Houston Methodist suspended her because “they are using me as an example.” The hospital made headlines earlier this year as one of the first in the nation to mandate the experimental COVID-19 jab for all employees. Bowden has not had any prior disciplinary action, according to the Dallas Morning News.

The doctor said that she has “very loose ties” to Houston Methodist and only obtained privileges in case one of her patients needed hospitalization.

“I’m proud to say that because of my early and aggressive treatment for patients with COVID have not needed to admit anybody to Methodist,” she said, adding that none of her patients have had a serious reaction to the drug.

Bowden is currently fighting another Texas hospital, Texas Health Huguley Hospital in Fort Worth, to administer ivermectin to a critically ill COVID patient.

The Houston Chronicle reported that Bowden wrote a prescription for ivermectin for Jason Jones, a 48-year-old sheriff’s deputy, but was blocked by the hospital from administering the drug. She recommended ivermectin for Jones after he did not improve with other treatments, according to court filings. Jones was put on a ventilator in a medically induced coma October 7.

Imagine that your 48 year old husband, the father of your 6 children, is dying in the ICU and the doctors would rather have him die than try ivermectin.

His wife, Erin, sued Huguley Hospital late last month to let Bowden treat her husband with ivermectin. A district court initially granted the request, though a state appeals court reversed that decision on Thursday after the hospital submitted an emergency appeal.