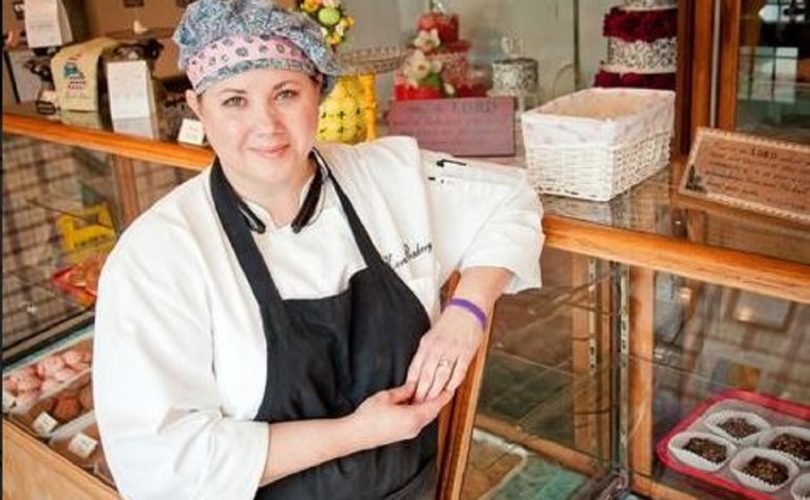 Baker Edie Delorme has received death threats since declining to bake a cake to celebrate a homosexual ceremony.

LONGVIEW, Texas, March 11, 2016 (LifeSiteNews) – LGBT activists are threatening the family of a couple whose Christian beliefs did not allow them to bake a cake for a same-sex “wedding” ceremony, according to an attorney for the couple.

Edie and David Delorme took over Kern's Bake Shop last year, but trouble reportedly arose after they declined to bake a cake for Ben Valencia and Luis Marmolejo on February 17. Michael Berry of First Liberty, who was retained by the Delormes even though a lawsuit has not been filed, told TheBlaze that trouble includes false Yelp reviews, malicious Facebook comments, and threats against the physical safety of the Delormes and at least one of their children.

“Our [17-year old] son got a call … where they threatened to burn our house down and violate him with a broken beer bottle,” Edie told TheBlaze. “That was probably the worst.”

Berry told LifeSiteNews that “the Delormes property has been damaged. They've experienced minor vandalism at their home, including their mailbox being destroyed. We reported both the vandalism and the threats they have received to the Harrison County Sheriff. The Sheriff's office sent a deputy to talk to the Delormes and they are now patrolling the area to make sure no additional acts are perpetrated against the Delormes.”

The Delormes say they aren't targeting same-sex couples, but merely following their sincerely held Christian beliefs. They have declined to make baked goods that promote alcohol, tobacco, and gambling, and cakes with risqué messages, according to Berry.

Edie told TheBlaze that because cakes are a “celebration” of weddings, “we want to make that cake the most perfect for them, exactly what they wanted … we really pour ourselves into it, and we take delight in seeing their joy in what we were able to create for them.”

“That cake is used to celebrate a union. We just don't feel like we're supposed to take part in the celebration of that union, because it's a violation of our faith,” she said.

For his part, Valencia told the Longview News-Journal that the rejection of the cake caused him to “feel dehumanized.”

David said that when they get harassing phone calls and fake orders, “We just say, 'You have a nice day,'” he told TheBlaze. “Scripture requires us to turn the other cheek, so that's what we do.”

The Delormes say support outnumbers negative responses four to one – including a gay customer who has continued being a customer and a gay couple who offered support and an apology.

“A couple of gentlemen came in … and apologized to us, which, we told them we appreciated that,” Edie said.

“We hope everyone will approach this situation with tolerance and respect,” Berry told LifeSiteNews. “In a diverse society, people will have differences of opinion. We need to protect diversity of thought and the right for people to disagree peacefully. It would be very inappropriate for a lawsuit to be filed. Both state and federal law protect the Delormes' right to operate their business according to their faith.”