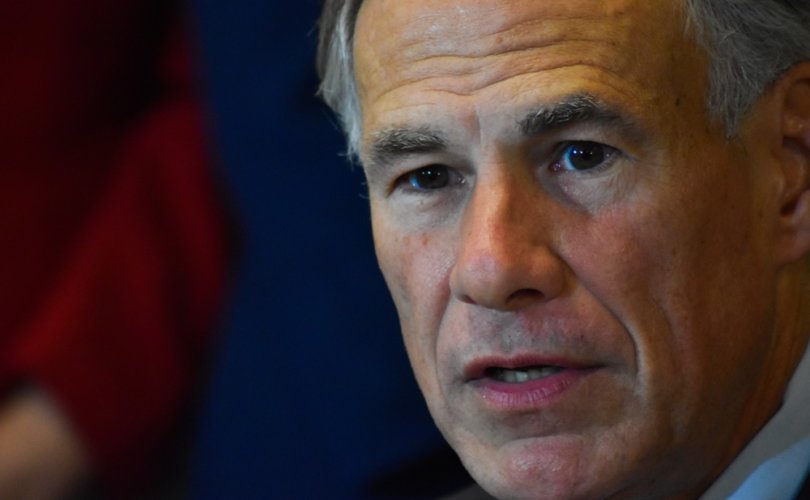 In a letter Tuesday, Abbott also ordered the Texas Department of Family and Protective Services (DFPS) to launch investigations into “any reported instances of Texas children being subjected to abusive gender-transitioning procedures,” the governor’s office said.

Directing @TexasDFPS to conduct prompt & thorough investigations of any reported instances of Texas children being subjected to abusive gender-transitioning procedures.https://t.co/cWqC3AyQCq

Abbott’s directive noted that state law requires all licensed professionals who come into direct contact with children, including medical professionals and teachers, to report child abuse or face criminal punishment. “Texas law also imposes a duty on DFPS to investigate the parents of a child who is subjected to these abusive gender-transitioning procedures, and on other state agencies to investigate licensed facilities where such procedures may occur,” the governor added.

Abbott CC’d the letter to various state agencies, including Texas Education Agency and the Health and Human Services Commission. The directive affirmed that “DFPS and all other state agencies must follow the law as explained in [Attorney General Paxton’s opinion].”

The move comes after one day after Paxton announced in an advisory opinion that transgender “sex change” practices for minors constitute child abuse under the Texas Family Code, which prohibits physical, mental, and emotional injuries to a child.

Paxton’s opinion applies to genital mutilation surgeries, mastectomies, and any other procedures that involve “removing from children otherwise healthy or non-diseased body part or tissue,” as well as transgender hormone drugs, such as puberty blockers.

“Each of the ‘sex change’ procedures and treatments enumerated above, when performed on children, can legally constitute child abuse” under state law, the Republican attorney general wrote. “When considering questions of child abuse, a court would likely consider the fundamental right to procreation, issues of physical and emotional harm associated with these procedures and treatments, consent laws in Texas and throughout the country, and existing child abuse standards.”

“The Texas Family Code is clear — causing or permitting substantial harm to the child or the child’s growth and development is child abuse. Courts have held that an unnecessary surgical procedure that removes a healthy body part from a child can constitute a real and significant injury or damage to the child,” Paxton continued.

Paxton said Monday that there’s “no doubt that these procedures are ‘abuse’ under Texas law, and thus must be halted,” adding that DFPS “has the responsibility to act accordingly.”

These procedures are monstrous and tragic. “I’ll do everything I can to protect against those who take advantage of and harm young Texans. https://t.co/AOoO5NNmyC

In a statement to local news Tuesday afternoon, DFPS confirmed that it will enforce the attorney general’s opinion.

“At this time, there are no pending investigations of child abuse involving the procedures described in that opinion,” a DFPS spokesperson told KXAN Austin. “If any such allegations are reported to us, they will be investigated under existing policies of Child Protective Investigations.”

The agency previously declared in August that transgender genital mutilation surgery is child abuse after a review ordered by Gov. Abbott. The top gender clinic in Texas, GENECIS, shut down weeks later. In December, Paxton launched an investigation into two pharmaceutical companies accused of illegally promoting hormone blockers for children with gender dysphoria.

The American Principles Project (APP) commended Paxton for “courageously standing up for Texas’ children in the face of these attacks.”

“He is merely affirming an extension of the above truths: children cannot consent to taking drugs and undergoing surgeries that can permanently sterilize them and radically alter the course of their lives. And any person who assists or encourages minors in pursuing these ends is committing child abuse, period,” the APP said.

The conservative group urged other state attorneys general “to follow his lead to protect the innocence of our nation’s kids from the woke ideologues and Big Pharma executives eager to exploit them.”

Paxton issued Monday’s opinion after a request by Republican Texas state Rep. Matt Krause, who sought clarification as to whether transgender procedures not covered by DFPS’s August directive would also constitute abuse according to state law.

The Texas Senate passed multiple bills in 2021 that would have outlawed transgender drugs and surgeries for anyone under age 18, though they died in the GOP-controlled House, despite the backing of dozens of Republican co-sponsors. Two states, Arkansas and Tennessee, enacted laws last year to restrict transgender procedures for minors.

Republican lawmakers in at least 16 states have introduced bills in recent months to ban the practices.

In his 13-page opinion, Paxton stressed that “gender transition” procedures that damage fertility violate a minor’s “fundamental right” to procreate.

Though elective “sex change” practices for children are a recent trend, sterilization of children without clear consent “is not a new phenomenon and has an unsettling history,” he observed.

“These violations have been found to infringe upon the fundamental human right to procreate,” which the Supreme Court recognizes as a constitutional right under the Fourteenth Amendment, the attorney general continued. “Any discussion of sterilization procedures in the context of minor children must, accordingly, consider the fundamental right that is at stake,” he said.

Transgender drugs and surgeries, Paxton noted, are also linked to a host of other serious side effects, such as thrombosis, cardiovascular disease, increased cancer and stroke risk, and “serious mental health effects.” U.S. regulators have not approved any medical treatment for gender dysphoria, and there is no long-term, clinical data about the use of transgender procedures in minors with gender disorders.

Up to around 99 percent of boys and 90 percent of girls with gender dysphoria will come to accept their biological sex by adulthood, according to the latest edition of the American Psychiatric Association’s Diagnostic and Statistical Manual of Mental Disorders.

“Sex changes” surgeries have been performed on children as young as 13 years old in the United States.