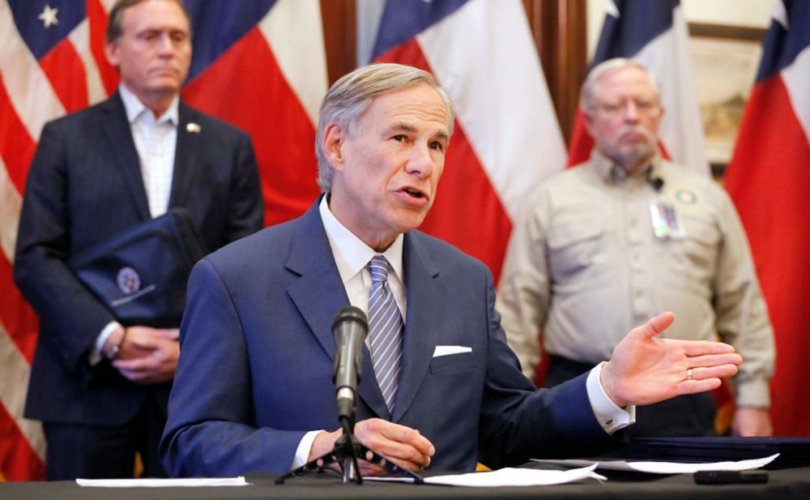 “Please issue a determination of whether genital mutilation of a child for purposes of gender transitioning through reassignment surgery constitutes child abuse,” Abbott wrote in a letter Friday to DFPS commissioner Jaime Masters, whom he appointed in 2019.

“Subjecting a child to genital mutilation through reassignment surgery creates a ‘genuine threat of substantial harm from physical injury to the child,’” Abbott’s letter stated. “This broad definition of ‘abuse’ should cover a surgical procedure that will sterilize the child, such as orchiectomy or hysterectomy, or remove otherwise healthy body parts, such as penectomy or mastectomy.”

Abbott emphasized to Masters that a determination of abuse would require DFPS to investigate parents involved in cases of surgical mutilation of minors with gender dysphoria:

As you know, classifying genital mutilation of a child through reassignment surgery as child abuse would also impose a duty on DFPS to conduct prompt and thorough investigations of the child’s parents, while other state agencies would be obliged to investigate the facilities they license.

The governor vowed last month to restrict transgender procedures for children after legislation designed to protect kids from the practices failed to pass the Republican-controlled Texas legislature earlier this year. “I have another way of achieving the exact same thing, and it’s about a finished product as we speak right now and may be announced as soon as this week,” Abbott said in a July interview.

The Texas Senate passed multiple bills to prohibit transgender surgeries and hormone drugs in the regular legislative session that ended in May, though the bills later died in the House, despite garnering dozens of Republican co-sponsors. Abbott has not included the proposals in agendas for the special legislative sessions that he has called this summer.

Abbott also has not moved to restrict transgender drugs, like puberty blockers and cross-sex hormones, that would be barred by bills approved by the Senate.

Puberty blockers put children at risk of permanent side effects such as osteoporosis, cognitive impairment, and sterility, according to the American College of Pediatricians (ACPeds). And they virtually always lead to use of cross-sex hormones, which are a fast track to genital mutilation and other destructive, irreversible surgeries.

“There is not a single long-term study to demonstrate the safety or efficacy of puberty blockers, cross-sex hormones and surgeries for transgender-believing youth,” ACPeds has said. Gender dysphoria is a treatable condition that resolves naturally in children and adolescents in up to 88-97.8 percent of cases, according to the American Psychiatric Association.

“The letter Greg Abbott sent to DFPS today is one that he could have sent six years ago. He didn’t,” Huffines said. “He also could have tasked the Texas Legislature with passing it. He hasn’t. He also leaves open the ability for abusers to continue chemical castration and brainwashing — something his own political appointees are participating in.”

“Greg Abbott must immediately task the Texas Legislature with outlawing not only genital mutilation, but also the brainwashing and chemical castration of Texas children,” Huffines continued. “Texans deserve a governor who will fight against the radical Leftist sickos and end their war on children.”

Abbott’s letter came days after a Texas judge ruled that James Younger, an eight-year-old boy whose non-biological mother is suing to subject him to “gender transitioning,” temporarily granted the mother full custody of James and his twin brother.

The consent of James’ father, who opposes chemically castrating his son, is still required for transgender procedures, though the boy’s mother may make him undergo gender “counseling” and may “socially transition” him against his father’s will.

Two years ago, Abbott said that DFPS and the Texas Attorney General’s Office had begun an investigation into Younger’s case. James’ court-ordered, pro-transgender psychologist, Dr. Susan Fletcher, has been appointed to several state boards by Abbott, the Texan reported.