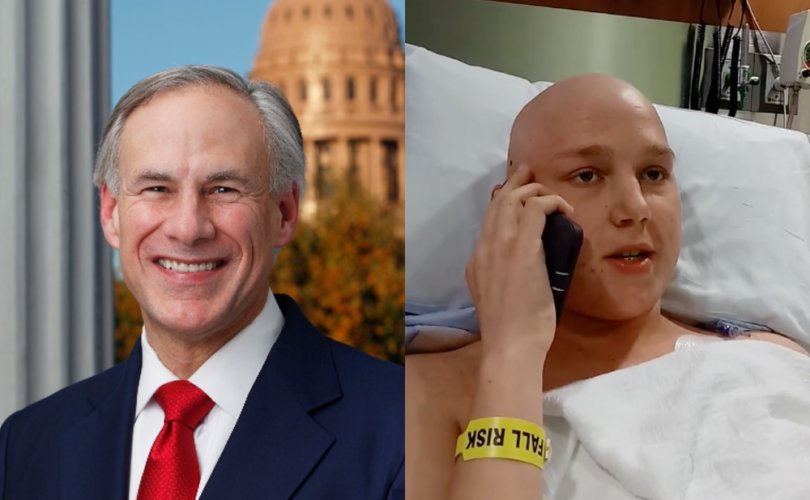 TEMPLE, Texas, June 19, 2018 (LifeSiteNews) – The Governor of Texas has promised a pro-life teen dying from cancer that he will “outlaw abortion altogether in the state of Texas.”

Governor Greg Abbott, 60, called his constituent Jeremiah Thomas as the teen lay in the cancer ward of a children’s hospital. The Governor was connected to the teen through “Make a Wish,” a program that allows young people who are terminally ill to fulfill a personal dream. Many children choose to meet a personal hero, like a sports star. Thomas decided to use his “wish” to reach out to the governor and ask him to do something to end the killing of preborn babies.

Jeremiah asked the Governor to treat abortion “like an act of murder.”

“For my wish, I wanted to talk to you and discuss a bill of abolition [to end abortion]” he said.

Jeremiah told the governor that a recent poll showed that 68% of [Republican] Texans want abortion abolished.

“Sir, you would be representing the demands of Texans if you would pass this bill,” he said.

“We could end abortion here and now.”

The boy’s face lit up at the governor's response, which was recorded on video and uploaded to Facebook.

“Your wish is on the Republican party platform position,” Governor Abbott said, “and we’re going to be pursuing this…And that is to outlaw abortion altogether in the state of Texas”

“So, your wish is granted,” he added.

Jeremiah Thomas, 16, was an all-star, state champion athlete when he was diagnosed with cancer in March 2018. His father Rusty, the director of pro-life group Operation Save America (formerly known as Operation Rescue), has been reporting from his son’s bedside, not only to ask for lifesaving prayers, but to witness to his son’s love for God.

Jeremiah was diagnosed with osteoblastic osteosarcoma, a bone cancer that is resistant to radiation therapy. The boy had two tumors on his spine and one on his chest. The cancer progressed, defeating treatment. Jeremiah has now become paralyzed from the waist down and is in constant pain. From the very beginning, he had only a 10% chance of survival.

In July 2017, Jeremiah publicly accepted Jesus as his Lord and Savior in an “Operation Save America” service. He expressed on film his eagerness to go home to Waco, Texas to share the Gospel with his friends. When he lost the use of his legs only a few months later, he said, “I can still preach from a wheelchair.”

“What was truly amazing to see was the ministry opportunity that was given to me when I got sick,” Jeremiah said on-camera. “As soon as I got sick, my testimony blew up [in size]. Constantly people were texting me, encouraging me, giving me their testimony and their blessings and prayers.”

Jeremiah encouraged viewers to join an Operation Save America event from July 14 to 21st in Indianapolis, Indiana to pray for an end to abortion. He knew he would not be able to be at the “From Justice to Victory” event himself, but he said he would be there in spirit.

“We’ll have an awesome group of youth there,” he promised. “If you’re truly looking for change, you’re sick of what you see of your generation and culture, and you want to see God move in mighty ways, come join us.”

“Let’s end this holocaust in the mighty Name of Jesus.”

But on Thursday morning, Rev. Rusty Thomas updated Jeremiah’s many friends and fans with sad news: after a day home, Jeremiah had been rushed back to McLane Children’s Hospital with a fever. After checking the boy for the source of the infection, a doctor told his father that Jeremiah’s health was rapidly deteriorating.

“The cancer is growing. It’s growing on his spine. It’s increased on his lungs. He has more nodules, and they’re growing. And then, of course, there’s that tumor on his chest, and it’s an ulcerated tumor. That’s something that is very rare in cancer patients…. “

The prognosis is not good.

“It is very obvious now that wherever we have gone and whatever we have done to try to save the life of our son … humanly speaking, it has not worked,” Rusty said, in tears. “The chemo, the radiation, does nothing to retard or to reduce this cancer. In talking with the doctor, we’re basically preparing Jeremiah to come home, to go home, to be with the Lord.”

Rusty is now preparing for the loss of his son although he hasn’t given up hope in a miracle.

“Again, barring a miracle of God, and we’re not dismissing that,” he stressed. “God could intervene or interpose at any time. He actually waited four days after Lazarus was dead before He intervened and raised him from the dead. And I know our God is able to do that. And barring that miracle, we’re trying to get Jeremiah home, so we can have this gift as a family to love and serve and care for our son.”

Rusty indicated that his public broadcasts about his son’s illness will not be as frequent, but that he is grateful that God has used Jeremiah’s illness to change the lives of many people.

“We are eternally grateful that God has used the plight and suffering of our son to touch hearts for Christ.”

Earlier in his illness, Jeremiah published the following prayer on Facebook:

“I don’t deserve Your healing but Lord You will always deserve my praise. Through death or life, may Your great name be lifted up and everything that is of me fall to the waste side. Oh Lord, strengthen me that I may fight the battle with a courage Satan cannot tamper with. If You take me home or leave me here to fight a little longer, may it be Your breath in my lungs and Your song on my tongue. Lord I consecrate myself to the full advancement of the Kingdom of God! Lord, I love You and I can’t wait to see You face to face. Amen. Christ is not for sale and non-negotiable. To God be the glory, no matter what the future holds.”