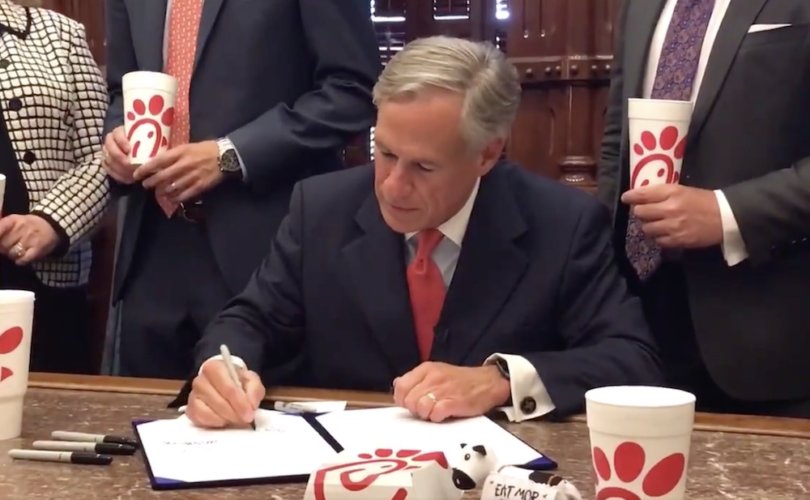 AUSTIN, Texas, July 23, 2019 (LifeSiteNews) – Texas Gov. Greg Abbott has signed a new law barring the state or local governments from acting against businesses on the basis of the owners’ religious beliefs, sending a message to the City of San Antonio and others who have all-but declared war on companies such as Chick-fil-A.

Senate Bill 1978 forbids any branch or agency of the Texas government, as well as lower jurisdictions, from taking any “adverse action” pertaining to any “grant, contract, subcontract, cooperative agreement, loan, scholarship, license, registration, accreditation, employment, or other similar status” on the basis of someone’s “sincerely held religious belief or moral conviction, including beliefs or convictions regarding marriage.”

The measure was soon dubbed the “Save Chick-fil-A bill” because it would have prevented the San Antonio City Council’s March decision to exclude the food chain from San Antonio International Airport because it claimed Chick-fil-A owners’ Christian view of marriage would keep travelers from “feel[ing] welcome when they walk through our airport.” The city currently faces state and federal investigations for religious discrimination.

Today I signed the ⁦@ChickfilA⁩ law in Texas.

And, had a great lunch.

No business should be discriminated against simply because its owners donate to a church, the Salvation Army, or other religious organization.

“Discrimination is not tolerated in Texas,” the governor declared. “No business should be discriminated against simply because its owners gave to a church, or to the Salvation Army, or to any other religious organization. No business should lose a government contract because of their religious beliefs. The Save Chick-fil-A legislation that I’m about to sign is a victory for religious freedom in Texas.”

The conservative victory comes after Democrat state Rep. Julie Johnson caused the bill to miss a legislative deadline in May via procedural maneuvering, though Republicans later revived it.

Pro-LGBT activists blasted the new law, with Equality Texas issuing a statement that the bill was an “anti-LGBTQ dog whistle” meant to “undermine LGBTQ equality and promote anti-LGBTQ messages.” Notably, however, the group also admitted that the bill “simply reaffirms First Amendment protections” and “does not take away the rights of LGBTQ people.”

Despite left-wing claims that the wildly-successful chicken chain is “hateful” due to CEO Dan Cathy’s stated opposition to same-sex “marriage” and the company’s donations to social conservative groups such as Family Research Council and Focus on the Family, many homosexual employees and customers have attested to positive, welcoming experiences with Chick-fil-A.

The new “Save Chick-Fil-A” law follows Abbott recently signing two new pro-life measures into law, one banning infanticide and another barring local governments from doing business with the abortion industry.