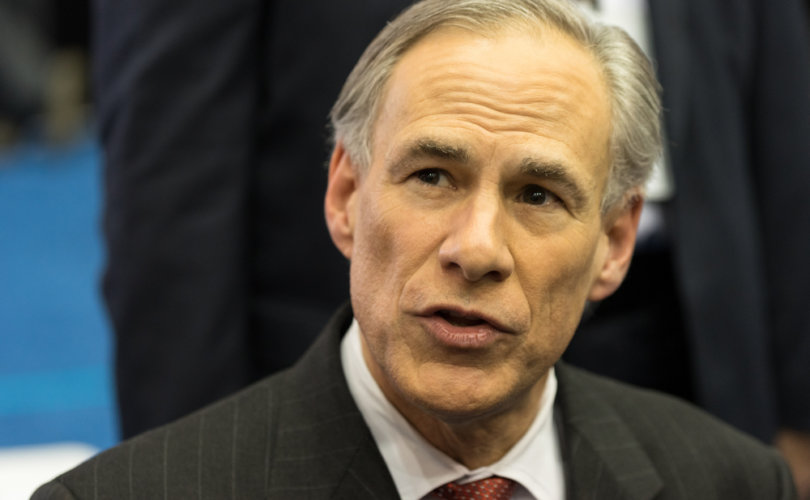 “Legislators have six weeks to prepare for the special session, and then another 30 days to pass these proposals,” said Abbott, announcing the July 18 start date.

“If they fail, it’s not for lack of time, it would be because of a lack of will,” he said, according to the Austin-American Statesman.

NBC-5 in Dallas-Ft. Worth reported, “The session is 30 days, and legislators don't have to approve what is on the governor's agenda. But the governor has the option to continue to call lawmakers back, and only the governor can decide the topics of a special session.”

Texas conservatives, who had been lobbying for a special session after SB 6 was stalled by “moderate” Republican and House Speaker Joe Straus, were elated at Abbott’s decision. A headline on the Conservative Republicans of Texas (CRTX) website read: “Hurray for Gov. Abbott for Calling Special Session and Including SB 6, the Women's Privacy Act, 'No Men in Women's Bathrooms!'”

Conservative favorite Lt. Gov. Dan Patrick congratulated Gov. Abbott for his “big and bold special session agenda.” Patrick presides over the Senate and has been the most vocal Republican leader championing the “bathroom bill” in the Lone Star State.

“Almost every issue he addressed today passed the Senate during the regular session, and I am confident the senators are ready to hit the ground running to move these issues forward,” Patrick said, according to the Statesman.

“We are thrilled that Gov. Abbott added the Privacy issue to a list of 20-plus bills on the special session call,” said Jonathan Saenz, president of Texas Values. “We know that Gov. Abbott, along with the overwhelming majority of Texans, supports keeping men and boys out of girls’ restrooms, showers, and locker rooms. This is a growing problem that must be solved before children head back to school. We look forward to helping parents and children to have the protection in law they deserve.”

In contrast, LGBTQ activists have blasted SB 6 as discriminatory, unnecessary and harmful to Texas’ business climate. The homosexual-transgender lobby Equality Texas calls it a “shameful attack on transgender kids.”

CRTX listed the following 14 legislative goals as among the “major issues that will be taken up during the Special Session”:

– The passage of sunset legislation that will fund five state agencies

– Protecting the privacy and safety of women and girls in public bathrooms, showers and locker rooms

– School vouchers for special needs children, so that their parents can choose the school of their choice

– Prohibiting cities from regulating the use of trees on private property

Reflecting the anger at Speaker Straus among Texas social conservatives for refusing to put SB 6 up for a vote in the House regular session after it passed in the Senate, Dr. Hotze said, “You need to put pressure on your state representative to tell RINO [Republican in name only] Straus that these bold conservative proposals must be adopted by the Texas House.

“The only way that you can ensure that these legislative initiatives will be adopted is by telling your state representative to vote to remove Straus as Speaker,” he said.

Speaker Straus has called SB 6 “manufactured and unnecessary.” He is aligned with major corporations in Texas working to defeat the “bathroom bill” and any legislation in the state deemed anti-LGBT.

“If we’ve gotten to the point in our civilization, in our society, that our politicians have to pass bills about bathroom stuff … I mean, we’ve gotten really out of control,” Straus said in March, the Texas Tribune reported.

Meanwhile, a bill protecting the conscience rights of faith-based child welfare and adoption agencies in Texas awaits the governor’s signature.

“Important Pro-Life measures were thwarted during the regular session by political games in the Texas House.  While these important bills still have a long way to go before they get to the governor’s desk, Pro-Life activists can celebrate the opportunity to add significant gains to the victories won in the regular session of the 85th Legislature,” said a Texas Right to Life release.

1
Dr. Robert Malone: Endless mRNA jabs are in the works as the CDC and FDA play ‘hide the data’
2
Open letter to Elizabeth Warren: Why do you campaign so strongly for the murder of the unborn?
3
REPLAY: LifeSite’s 25th Anniversary Gala
4
Why is Pierre Poilievre silent on the family policies that matter to conservatives?
5
Residents of Texas city successfully quash pro-LGBT ‘diversity, equity, inclusion’ gov’t proposals
Subscribe to Daily Headlines »