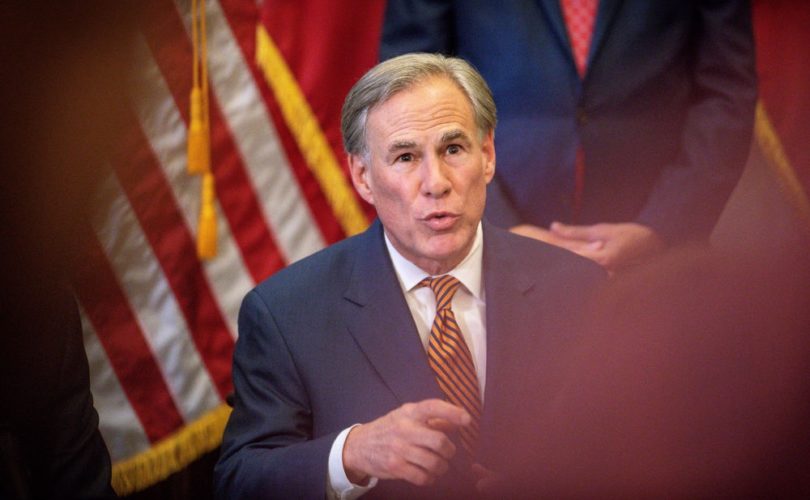 AUSTIN, Texas (LifeSiteNews) – Texas is investigating parents who are subjecting their children to dangerous, experimental “gender transition” procedures after a recent order from Gov. Greg Abbott declared that the practices constitute child abuse.

According to a lawsuit filed Tuesday, the Texas child protection agency has launched investigations into several parents for pursuing transgender drugs or surgeries for their kids.

Abbott last week ordered all state agencies to treat transgender hormones and “sex change” procedures for minors as child abuse under state law. In Abbott’s directive, he also instructed the Texas Department of Family and Protective Services (DFPS) to investigate all reported instances of children and adolescents in the state undergoing “abusive gender-transitioning procedures.”

DFPS began investigating parents within hours of the governor’s order, according to a suit filed by the American Civil Liberties Union (ACLU) of Texas and LGBT activist group Lambda Legal. DFPS confirmed in a statement to Reuters that it has “had three intakes” as of Tuesday.

Among the first people that the agency looked into was a DFPS employee currently subjecting her 16-year-old son to hormone drugs and raising him as a female.

The employee, identified in the filing as “Jane Doe,” was placed on leave last week. A DFPS agent visited her family on Friday and has requested her son’s medical records, though she and her husband, “John Doe,” have refused to provide them, the lawsuit stated.

The ACLU of Texas and Lambda Legal sued to stop the investigation, which a local Texas judge temporarily paused on Wednesday. The groups have also challenged Abbott’s directive.

Paxton on Thursday appealed Travis County District Judge Amy Clark Meachum’s order blocking the inquiry into the Does. DFPS is not enjoined from investigating other parents who are reportedly “transitioning” their children.

There have been no clinical trials on the use of puberty blockers, cross-sex hormones, or other “gender transition” procedures in minors with gender dysphoria, and the Food and Drug Administration (FDA) has never approved medical treatments for the condition. Transgender hormone drugs and surgeries have also been linked to a host of serious and life-threatening side effects, including sterilization, heart attack, increased risk of stroke and cancer, thrombosis, and psychological problems.

A Houston psychologist, Dr. Megan Mooney, also joined the Does’ lawsuit as a plaintiff. Mooney has referred minors with gender dysphoria for “medical treatment,” the filing said, and is legally bound to report child abuse to DFPS.

Abbott’s directive noted that licensed professionals who have direct contact with children, including doctors and teachers, can face criminal penalties under state law for not reporting cases of child abuse. “There are similar reporting requirements and criminal penalties for members of the general public,” the governor added.

According to the Does’ suit, doctors and other healthcare providers across Texas have stopped prescribing transgender drugs to children as a result of Abbott’s crackdown.

The mother of a girl being raised as a boy told The New York Times that their health clinic, Legacy Community Health, has halted refills and new prescriptions of hormones for gender-confused minors due to the governor’s directive. The girl only has one week left of her off-label testosterone prescription, the Times said.

Multiple countries, including Sweden and Finland, have moved to restrict puberty blockers and cross-sex hormones for children. Sweden last week formally recommended against hormone drugs for gender dysphoria in children under age 18 due to “uncertain science” and significant side-effect risks. Finnish health officials released similar guidelines in 2020, citing unknown effects on brain maturity and the central nervous system and loss of bone density as a result of puberty blockers.

And in the U.K., an official review last year commissioned by NHS England found that existing studies supporting puberty blockers or cross-sex hormones for gender-dysphoric kids are all of “very low quality.”

Up to 98 percent of boys and 88 percent of girls with gender dysphoria grow out of the condition by adulthood if not subjected to puberty blockers, according to the latest edition of the American Psychiatric Association’s Diagnostic and Statistical Manual of Mental Disorders.

Puberty blockers almost always lead to cross-sex hormones, which research shows cause sterilization and are most often followed by to mutilating transgender surgeries. Kids as young as 13 years old have received “sex change” surgeries in the U.S.