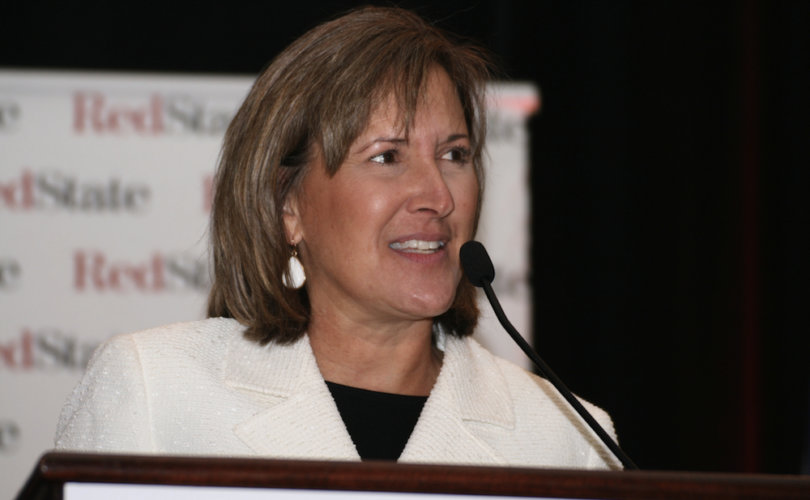 November 23, 2016 (LifeSiteNews) — A Texas legislator sponsoring “parents’ right to know” legislation — barring schools from withholding mental and emotional health and medical information about students from their parents — is getting pounded by LGBTQ activists who claim it would force the “outing” of homosexual and “gender non-conforming” students.

State Sen. Konni Burton, a Christian and tea party Republican, denies that claim and the “intentional misinformation and fear-mongering” campaign waged by LGBTQ critics against SB 242. She said it is designed to “make it unequivocally clear that a parent has a right to full and total information on their child’s academic performance, physical, mental and emotional health, and more.” The bill was pre-filed in advance of the upcoming legislative session in January.

Meanwhile, homosexual and transgender activists working in concert with the NEA and ACLU are advising schools across the nation in some cases not to reveal a student’s “transgender” status to his or her own parents.

Burton stresses that existing Texas law already guarantees parents the right to be informed about the child and not to have critical information withheld by school officials. However, after Fort Worth Independent School District Superintendent Dr. Kent Scribner enacted a policy of divulging a student’s “transgender” identity to parents strictly on a “need-to-know” basis, an “appalled” Burton vowed to strengthen and clarify parents’ right to get information about their own child.

“My legislation will make it expressly against state law for a district to adopt policies designed to undermine a parent’s right to know,” Sen. Burton wrote to her supporters. “No parent in Texas should ever have to fight for the basic right to matter in their child’s life again.”

A key organizer for then-candidate Ted Cruz’s successful run for U.S. Senate in 2012, Sen. Burton describes herself as “first and foremost a wife, a mom, and a lifelong Christian.”

In the last decade, homosexual and transgender activists have honed their ability to deluge local and state legislators who proposed pro-family, LGBTQ-related legislation with hostile, often vicious messages and exaggerated online attacks against them and their bills.

“We believe Sen. Burton’s legislation would essentially destroy protected communications between a student and an educator. SB 242’s stated intent would force the outing of LGBTQ students.”

SB 242 about parents, not LGBTQ

In an online statement, Sen. Burton denied that her bill is anti-LGBTQ:

“Although the district’s aggressive overreach had to do with policies for transgender students, the focus of our bill has nothing to do with issues of sexuality and gender, and everything to do with how parents are treated by the government entities they fund. I would firmly stand against any policy that treated parents as unessential in their child’s life, regardless of what group the policies were intended for. You will not find the words “sexuality” or “gender” anywhere in the proposed bill.”

Burton’s bill likely will be modified when it is formally introduced in the state Senate in January, but already her chief of staff, Elliot Griffin, has had to defend it. The Houston Chronicle reported:

If a student talks to a teacher or counselor about being gay or identifying as some other sexual minority, Burton's proposed bill is silent on how the teacher would be required to respond, [Griffin] said.

“We wouldn't presume to tell an individual teacher what to do,” [Griffin] said. “If you (as a parent) call and ask about your child, you should have the expectation that the school isn't going to withhold valuable information. It's existing state law.”

“I wholeheartedly support Texas Sen. Konni Burton in her attempts to pass SB 242. This bill would ensure that parents — not public schools — are given the information needed to make decisions over their children. Parents ‘own’ their children; they are not ‘owned’ by the public schools.”

Also supporting SB 242 is Linda Harvey, president of Mission America and one of the world’s leading conservative experts on the LGBTQ agenda in schools. Pointing to aggressive advocacy in schools by powerful LGBTQ organizations — undermining parents’ right to know about their gender-confused student-children — Harvey told LifeSiteNews:

“This common sense bill offends the sexual anarchy progressives because groups like the NEA teachers’ union, the ACLU, and Human Rights Campaign are militantly establishing a new norm for schools: become allies with students, if needed, against parents to conceal student sexuality concerns, which violates the long-standing legal precedent of parental rights.”

LGBTQ Lobby: Do NOT inform parents their child is “transgender”

Leading homosexual and transgender activist organizations are advising schools nationwide not to share a student’s gender-confused or “transgender” identity with his or her parents to protect the student’s privacy. Here is a portion a 2013 “Model Policy on Transgender and Gender Non-Conforming Students,” jointly produced by the Gay, Lesbian Straight Education Network (GLSEN) and the National Center for Transgender Equality:

“All persons, including students, have a right to privacy, and this includes the right to keep one’s transgender status private at school. Information about a student’s transgender status, legal name, or gender assigned at birth also may constitute confidential medical information. Disclosing this information to other students, their parents, or other third parties may violate privacy laws, such as the federal Family Educational Rights and Privacy Act (FERPA). The District shall ensure that all medical information relating to transgender and gender nonconforming students shall be kept confidential in accordance with applicable state, local and federal privacy laws. School staff shall not disclose information that may reveal a student’s transgender status to others, including parents and other school staff, unless legally required to do so or unless the student has authorized such disclosure.”

Curiously, whereas “gay” and “transgender” advocates usually call on people to use politically correct pronouns matching the ever-expanding array of LGBTQ “gender identities,” the “Model Policy” urges school authorities to do the opposite when talking to the gender-confused child’s parents:

“Transgender and gender nonconforming students have the right to discuss and express their gender identity and expression openly and to decide when, with whom, and how much to share private information. The fact that a student chooses to disclose his or her transgender status to staff or other students does not authorize school staff to disclose other medical information about the student. When contacting the parent or guardian of a transgender student, school staff should use the student’s legal name and the pronoun corresponding to the student’s gender assigned at birth unless the student, parent, or guardian has specified otherwise.”

A much-discussed case in Minnesota shows how extreme school “student privacy” policies can be — to the point where school officials keep parents in the dark about body-changing “sex reassignment” treatments and procedures for their own child. LifeSiteNews reported last week:

A Minnesota mother sued St. Louis County and other agencies Wednesday for usurping her parental rights because her minor son has been receiving transgender “services” and given narcotic drugs without her consent.

Anmarie Calgaro’s involvement has been circumvented numerous times in regard to her 17-year-old son by the local school district, the county public health department and two medical services providers that have given her minor son medical treatment and narcotics for gender reassignment from male to female, national public interest law firm Thomas More Society says.