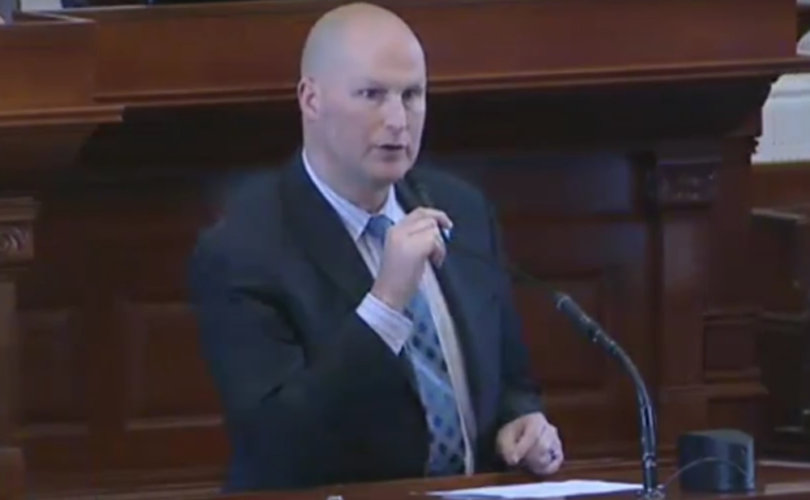 AUSTIN, Texas, February 6, 2017 (LifeSiteNews) – Freshman State Rep. Tony Tinderholt and wife Bethany are under security protection after death threats made in response to his new bill to abolish abortion entirely in Texas.

Yet Tinderholt insists in a statement on his Facebook that the threats on his family “pale in comparison” to the threat of abortion faced by “every unborn child in America.”

Tinderholt's chief of staff, Micah Cavanaugh, said in a statement that they cannot discuss specifics because of an ongoing police investigation. But he acknowledged that Tinderholt's family has received “multiple death threats leading to his family being placed under DPS protection on multiple occasions.”

Tinderholt’s House Bill 948, the “Abolition of Abortion in Texas Act,” makes abortion a crime as it was before the U.S. Supreme Court’s infamous Roe v. Wade decision in 1973. Under his bill, the mother and abortionist could be charged with murder even when the unborn child was conceived artificially or by rape or incest.

Asked whether the bill isn’t flying in the face of the Roe v. Wade decision, Tinderholt political consultant Luke Macias told LifeSiteNews, “Representative Tinderholt believes that legislating should be left to legislators and the governor. And then the interpretation of that law can be brought to bear by the judges. We don’t think we should seek their approval prior to passing it.”

The bill states, “A living human child, from the moment of fertilization upon the fusion of a human spermatozoon with a human ovum, is entitled to the same rights, powers, and privileges as are secured or granted by the laws of this state to any other human child.”

The bill also declares that “any federal statute, regulation, executive order, or court decision which purports to supersede, stay, or overrule this Act is in violation of the Texas Constitution.” It orders every county and municipal government to ensure its police and prosecutors are enforcing it “regardless of any contrary or conflicting federal statutes, regulations, executive orders, or court decisions.”

Tinderholt, a first-term representative from Arlington, is being protected by the Texas Department of Public Security, which oversees the Texas Rangers, with the assistance of the Arlington Police Department and Tarrant County sheriff's office.

Tinderholt has told The Texas Observer, “I don’t think that there should be any exceptions to murder, no matter what. So, if this child was out of the womb and it was a child that was born out of rape or incest, no one would be OK with killing a child. I look at it like that child is a child in the womb, just like it’s out.”

“Right now, they don’t make it important to be personally responsible because they know that they have a backup of ‘Oh, I can just go get an abortion,’” he said. “Now, we both know that consenting adults don’t always think smartly sometimes. But consenting adults need to also consider the repercussions of the sexual relationship that they’re going to have, which is a child.”