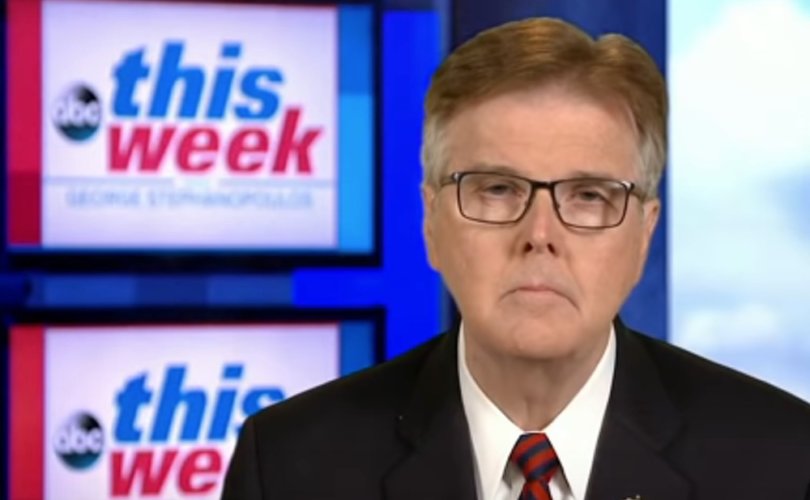 AUSTIN, Texas, May 21, 2018 (LifeSiteNews) – The Republican lieutenant governor of Texas cited abortion this weekend as one of several factors that have degraded America’s respect for human life, which he believes was one of the causes of the recent school shooting in his state.

A 17-year-old shot and killed eight students and two teachers at Santa Fe High School in Texas last Friday. He was subdued after a shootout with police, and is currently being held on murder and assault charges.

On Sunday, Lt. Gov. Dan Patrick appeared on ABC News’ “This Week” with George Stephanopoulos to discuss the case. The two debated a number of topics, including the availability of guns and school security procedures, but Patrick’s central thesis was that the problem is rooted in America’s “culture of violence.”

“We have devalued life, whether it's through abortion, whether it's the breakup of families, through violent movies, and particularly violent video games,” Patrick said.

“We can't sit back and say, 'It's the gun.' It’s us as a nation, George,” Patrick continued. “On this Sunday morning, when we all go to church and pray or go to synagogue or the mosque or wherever we go, let’s look inward at ourselves as a nation.”

Stephanopoulos pushed back on Patrick’s arguments about gun control and violent entertainment, but he notably declined to dispute his reference to abortion.

“We have 50 million abortions […] and we stand here and we wonder why this happens to certain students,” Patrick added Sunday in additional remarks reported by CNN.

Fred Guttenberg, who became a gun control activist after his 14-year-old daughter Jaime was murdered during February’s school shooting in Parkland, Florida, quickly denounced Patrick for “the most idiotic comments I've heard regarding gun safety” and demanded that he “be removed from office for his failure to want to protect the citizens of Texas.”

But while mass shootings typically happen due to a wide range of factors, from mental illness to children’s upbringing to overlooked warning signs, many have argued it’s no coincidence that a society which enshrines a “right” to kill preborn children has seen an uptick in killings of born children.

“If we have created a culture, in the words of one Catholic Deacon Greg Kandra, where human life is treated like trash, what do we expect here?” The American Spectator’s Jeffrey Lord has asked. He notes that “Wikipedia lists eight years of mass shootings in the United States between 1929 and 1972. That is a span of 43 years. Roe v. Wade was issued in 1973. Between 1973 and 2017 — a span of 44 years — the site lists 39 years of mass killings in the United States.”

The inconsistency of politicians, advocates, media, and entertainers who use language about protecting children’s lives to push gun control while supporting abortion-on-demand is a recurring facet of American politics. Former President Barack Obama, who supported abortion throughout all nine months of pregnancy at taxpayer expense, was known for uttering variations of “if there’s just one life we can save – we've got an obligation to try.”