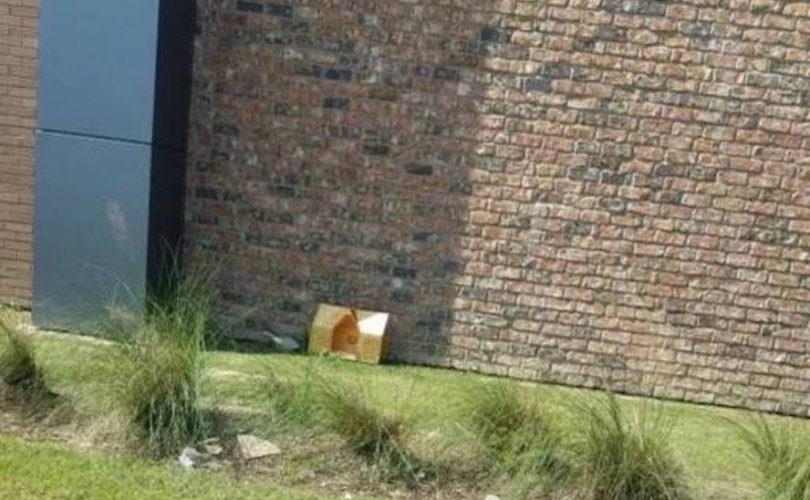 The tabernacle of St. Bartholomew Catholic Church was seen at a Burger King on May 11, cracked open and without the EucharistAdrian Fonseca/Twitter

KATY, Texas (LifeSiteNews) ― A young man has been arrested and charged with burglary after he confessed to stealing a tabernacle from St. Bartholomew Catholic Church in Katy, Texas.

On May 11, Christian James Meritt, age 26, was arrested by Katy, Texas police and charged with felony burglary of a building, criminal mischief, and felony possession of the drug methamphetamine. The Houston Chronicle reported that Meritt initially resisted arrest and damaged a police car, according to court documents.

The Katy Police Department stated in a press release shared with LifeSiteNews that Meritt confessed to stealing the tabernacle while being interviewed by detectives.

Meritt has previously been convicted for home burglary in 2017.

The Katy Police Department’s Captain Javier Martinez told LifeSiteNews that they believe the theft appears to be a crime of opportunity, committed to support his drug habit.

The tabernacle, which was stolen sometime between the evening of May 8 and the morning of May 9, was seen at a Burger King on May 11, cracked open and without the Eucharist, which Catholics believe is the true Body of Christ.

They found the tabernacle at a Burger King. Appears to be cracked open. Stole Our Lord and left behind the Gold. Clearly was not stolen for the money, but for something far more precious. pic.twitter.com/3Ler8MNnYZ

However, Adrian Fonseca, producer for Guadalupe Radio Network, who shared on Twitter a picture of the tabernacle beside the Burger King, later that day reported that the tabernacle was stolen a second time. Fonseca explained in a tweet that the tabernacle “was left behind because the person who took the picture needed to leave,” and that “When the person came back it was gone.”

The tabernacle itself was also discarded by Meritt and has not been recovered, according to the Katy Police Department.

The Archdiocese said in a statement, “Sadly, the tabernacle … has not yet been recovered, though efforts are ongoing. In any case, such a theft beyond material price is immeasurably hurtful to the Archdiocese and speaking theologically, is sacrilegious.”

They are asking all to “continue praying with us for the parish and all those involved in this matter.”

Since the theft, best-selling Catholic writer Dr. Taylor Marshall has encouraged Catholics to offer to help priests with their time, skill, or money to ensure that their church tabernacle is bolted down into church structure and safely locked, so that neither the tabernacle, nor the Eucharist alone, can be stolen.

According to the Houston Chronicle, Meritt is currently being held in the Harris County jail.

Katy Police announced in a press release that the investigation is still ongoing and invite anyone with additional information to contact Lt. J. Stewart at the Katy Police Department at (281)-391-4848.