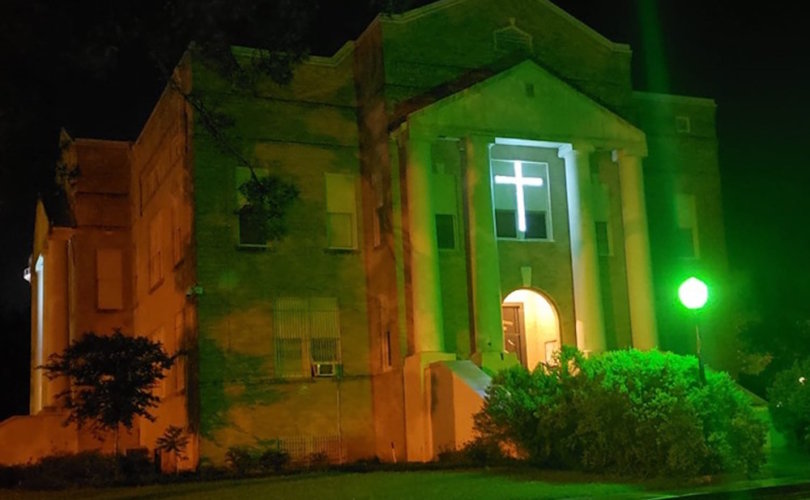 COLDSPRING, Texas, May 13, 2019 (LifeSiteNews) – Officials in the small east Texas town of Coldspring are showing their support for crosses at the local courthouses by illuminating them at night, flaunting demands by a Wisconsin-based pressure group’s demands to tear them down.

“These crosses unabashedly create the perception of government endorsement of Christianity,” the letter claimed, “making non-Christian and nonbelieving residents of Coldspring political outsiders.” It also argued that it constitutes “a blatant violation of the Establishment clause” of the U.S. Constitution, which states that “Congress shall make no law respecting an establishment of religion, or prohibiting the free exercise thereof.”

On Wednesday, the County Commissioners Court voted unanimously to keep the crosses after a three-hour public comment period attended by more than 600 people in the town of a population below 900. In addition, the town has started to illuminate the crosses, Breitbart reported.

That group Freedom from Religion is trying to have the crosses removed from the Coldspring, TX Courthouse and water tower. Please stand up with us against them. 8:30am May 8th on the Square. #savesthecrosses pic.twitter.com/bxwoH1fIrw

Hundreds of people at the community shelter in Coldspring to protest demands to bring down four Latin crosses from the San Jacinto County Courthouse. Some ppl here carrying crosses. @FoxNewsMMR pic.twitter.com/n385EQ34x5

“The purpose behind the Establishment Clause was not to create ‘a wall of separation between church and state.’ (As the Sixth Circuit Court of Appeals once noted, ‘this extra-constitutional construct has grown tiresome.’),” the American Center for Law and Justice (ACLJ) notes. “The very same Congress (specifically, the First Congress) that approved the language of the Establishment Clause also provided for the appointment of chaplains in the U.S. Senate and House of Representatives.

“In fact, on the very same day that it approved the Establishment Clause, the First Congress also passed the Northwest Ordinance,” the ACLJ continues, “providing for a territorial government for lands northwest of the Ohio River, which declared: ‘Religion, morality, and knowledge, being necessary to good government and the happiness of mankind, schools and the means of education shall forever be encouraged.’”

“It is extremely disappointing that the County has decided to continue violating the constitutional rights of its citizens,” FFRF attorney Chris Line lamented, Fox News reported. “FFRF will be following up with our local complainant and evaluating our next steps.”

Whatever form those next steps take, Coldspring will have formidable legal muscle on its side.

“We want to make it clear that your county may display historical religious symbols, like crosses, without violating the Establishment Clause of the First Amendment,” Texas First Assistant Attorney General Jeff Mateer wrote in a letter to Coldspring’s leaders. “You should know that you can reject FFRF’s demand to impose its anti-religion bias against San Jacinto County (…) on occasion FFRF will file a lawsuit to try to force government to purge all acknowledgment of religion. If that occurs, we look forward to supporting your lawful decision to retain the crosses.”