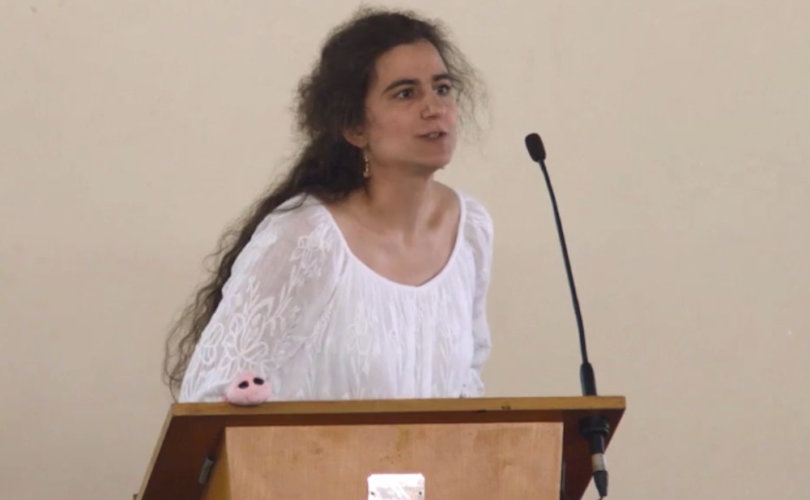 GUILDFORD, England, October 29, 2018 (LifeSiteNews) – Pro-life author Fiorella Nash calls herself a feminist. When discussing the near-religious fervor of the contemporary women’s movement for abortion, she is careful to call abortion advocates “radical feminists.” This is because Nash believes feminism is not wrong in itself but has merely lost its way.

“It’s become so ideologically obsessed with abortion and a very narrow view of women’s sexuality that it has drifted far away from its original purpose,” Nash told LifeSiteNews.

“I realize that some people think we should abandon the term ‘feminism’ altogether because it has become so tainted, so debased, and presents so much that so many quite property find offensive, like the tax on the family and abortion, but I’m not prepared to abandon the concept of feminism because so much more needs to be done,” she continued.

“We forget how very different life is for women in other countries. We in the United Kingdom tend to have a very narrow white middle class view about what women’s experience is. In many parts of the world women still fight for the most basic rights, like the right not to be abused – and the right to give birth to a baby girl.”

In her most recent book for Ignatius Press, The Abolition of Woman: How Radical Feminism is Betraying Women, the activist, novelist, and mother points out how a narrow, sex-obsessed brand of feminism harms women around the world: allocating funds for contraception and abortion in developing countries while ignoring the need for good prenatal care; romanticizing prostitution; remaining silent on the sex-selective abortion that has led to the deaths of millions of baby girls; ignoring how the IVF industry harms egg donors and would-be moms; and doing nothing to stop the exploitation of poor women as wombs-for-rent.

Nash is irritated by American women who dress up in pink “pussy hats” or don costumes inspired by The Handmaid’s Tale because they seem oblivious to women who really are treated like Atwood’s fictional “handmaids.”

“With commercial surrogacy we are funding and condoning the world of The Handmaid’s Tale, in which a class of women are expected to be breeders for childless western couples and same-sex couples,” Nash told LifeSiteNews.

Nash has worked for the UK’s Society for the Protection of Unborn Children (SPUC) for fifteen years, researching and giving lectures at universities. It was as a student at Cambridge University that Nash first discovered “the ugly side of feminism.” During the national student referendum on abortion in 2000, Nash saw a lot of pro-abortion bullying, especially of women. As the topic was debated at Cambridge University, she feared for the safety of pro-life speakers.

“‘Come on, sisters, can’t we do better than this?’” Nash recalled thinking. “‘This isn’t what feminism is supposed to be about. Can’t we have a forum where women can debate in a civilized fashion?’”

Nash had been involved in human rights campaigning since childhood and was astonished to discover that so many of her fellow activists supported abortion.

“For me it was a huge blind spot,” she said. Not being able to reconcile the “huge contradiction,” she moved towards pro-life work.

The Abolition of Woman is the culmination of 10 years of research, lecturing, and sounding out opinions, Nash said, beginning when she was first asked by SPUC to give a lecture on abortion from a pro-life feminist perspective. She credits Ignatius Press with the idea of turning her lectures into a book, and SPUC for the opportunity to do the work.

Beautifully written and a pleasure to read, the 234-page volume is so packed with arguments, insights, and information of interest to both pro-lifers and people who consider themselves feminists that busier readers may wonder where to begin. Nash suggests looking at how abortion is used to hurt women and how contemporary feminism is silencing the debate.

Several of the ills she describes stem from “the complete obsession with abortion” radical feminists have developed. Nash points to the “silence of collusion about [women in] China, about gendercide, about all these other issues that are really hurting women.”

If a feminist doesn’t believe in abortion, “you’re a heretic [to radical feminists] and have to be dragged back into the fold, by force if necessary,” she told LifeSiteNews.

But why are radical feminists so obsessed with abortion?

“I think it’s connected with the idea of no-strings-attached sex in the end,” Nash stated. Radical feminists acknowledge that contraception is unreliable and believe “abortion is necessary to rub out the mistakes.”

“Abortion has to be there so women can sleep around as they choose,” the author sighed. “It’s seen as the ultimate form of liberty.”