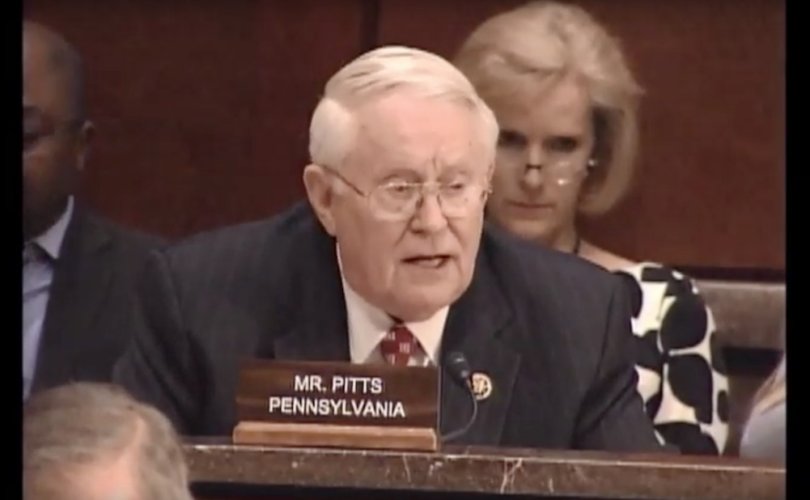 WASHINGTON, D.C., April 21, 2016 (LifeSiteNews) – Planned Parenthood and StemExpress “conspired” to break federal laws, facilitate the sale of fetal organs, and run “the Amazon.com of baby body parts,” according to testimony at a House committee hearing held today in Washington.

The hearing of the House Select Panel on Infant Lives discussed new documents saying that abortion facilities were paid tens of thousands of dollars for selling aborted babies' body parts.

One of the exhibits, released to the public, is the screenshot of an internal website of a biomedical research company that shows a lengthy menu of human organs for sale including fetal brain, heart, lungs, liver, rectum/anus, scalp, testes, and noses.

The website asks visitors, “What type of tissue would you like to order?” Customers could specify the number of organs, the baby's gestational age, and select shipping options.

“For crying out loud, this is the Amazon.com of baby body parts!” said Rep. Joe Pitts, R-PA, incredulously. “This is repulsive.”

“Each one of these little baby brain or tongues represents a baby,” the retiring pro-life congressman said in a more somber tone.

An expert witness, Senator Ben Sasse of Nebraska, said the website streamlines the organ purchasing process. “Just click on a brain, a heart, eyes, or scalp, and then select your gestation period, and then proceed to check out and select your shipment method,” he said. “Our humanity should be repulsed.”

But the panel's chair, Rep. Marsha Blackburn, R-TN, said, “This does not sound to me like tissue donation work. This sounds to me like someone who wants to make money – lots of money.”

Former federal prosecutors testified that the website menu, along with documents showing that abortion facilities sometimes charged more than $11,000 a month for their “fetal tissue donation program,” shows that both abortionists and biomedical companies may have violated federal law.

Brian Patrick Lennon, a former U.S. attorney, testified that “both the abortion clinics and the procurement business…likely conspired together to violate the statute.”

Federal law makes it illegal to receive “valuable consideration” – profit – from the sale of human organs, something investigators say Planned Parenthood did. Charts showed that technicians performed virtually all the functions abortionists would have received “repayment” for.

Michael Norton, a former U.S. attorney in the Reagan administration, said “there is probable cause to believe that the relevant statute has been violated.”

Former federal prosecutor Kenneth Sukhia said he discovered during past investigations of Planned Parenthood that “maximizing profit is a major priority of the abortion industry.”

The committee's Democratic minority moved to strike the documents from the record, then cast doubts upon their veracity.

StemExpress seemed to admit to Politico yesterday that the screenshot was taken from an internal part of its own website, and it wanted the fact stricken from the record.

“StemExpress has asked that we withdraw these documents,” said Rep. Diana DeGette, D-CO, at the outset of the hearing. “They don't reflect credibility, but instead they cast dishonor on the House.”

Her motion to exclude the documents was defeated 8-5.

New York Democrat Jerrold Nadler repeatedly called the screenshot “stolen,” while California's Jackie Speier said it was “likely the result of a theft.”

Democrats repeatedly attacked David Daleiden and the Center for Medical Progress. Sen. Jeanne Shaheen of New Hampshire testified, “These videos have since been proven to be misleading and false by multiple independent investigations across the country.”

However, later in the hearings, Norton referred to the Coalfire forensic report, which found the videos to be “authentic.” A Planned Parenthood-funded analysis performed by Fusion GPS, a D.C.-based opposition research firm, also found the videos eliminated only “irrelevant content.”

No forensics investigation has ever found the videos to be “false.”

Several members highlighted the indictments handed down over the use of a false ID during the process of CMP's 30-month investigation, with one witness saying the panel must “put Mr. Daleiden and his associates under oath and get to the bottom of what they did.”

Democrats called two witnesses involved in previous allegations of fetal organ trafficking, which they say had been discredited when a putative whistleblower recanted.

But Lennon said they were mixing apples and oranges. Recordings of Planned Parenthood officials discussing the procurement and financial benefit of organ sales are first-person “admissions [of guilt] that could be admissible in court,” he said.

Sukhia said that is a common tactic, as the abortion industry is “adept” at “deflecting” attention from its own misdeeds by casting aspersions at others.

“I know that the abortion industry and its allies are waging a campaign against any effort at transparency or accountability,” said Catherine Glenn Foster of the Charlotte Lozier Institute, a pro-life think tank. “It is what we can expect from a big business with an emphasis on maximizing profits and a lot of money to lose.”