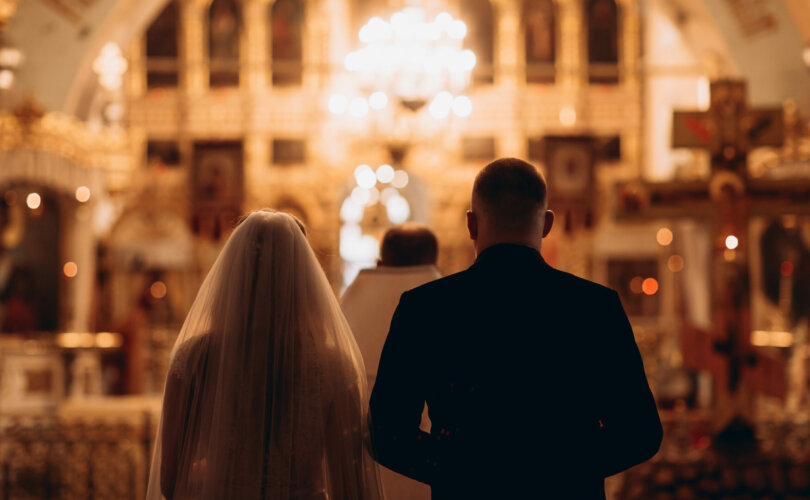 (LifeSiteNews) – America suffered a terrible blow this week when Congress passed the so-called “Respect for Marriage Act” (RMA) against the cries of Christians and social conservatives across the country.

The bill, which Joe Biden is set to sign in the coming days, will codify same-sex “marriage” into federal law and repeal the Defense of Marriage Act of 1996. Even if the Supreme Court eventually returns the issue to the states, the RMA will force them all to recognize homosexual “marriages” performed elsewhere, regardless of their own laws.

Perhaps most disappointing is that this historic defeat was handed to us by Republican leaders in Congress who we thought upheld natural marriage – or at least were unwilling to betray the most fundamental convictions of their base.

But the passage of the RMA doesn’t mean that the battle for marriage is over. Rather, it’s a wake-up call to fight harder.

Since Supreme Court handed down Obergefell in 2015, conservatives have too often ignored same-sex “marriage,” perhaps intimidated by fake news polling alleging overwhelming public support for it.

That strategy paved the way for the “Respect for Marriage Act,” however, and inaction isn’t an option, as the Church teaches: “In those situations where homosexual unions have been legally recognized or have been given the legal status and rights belonging to marriage, clear and emphatic opposition is a duty.”

Just as we worked for years to overturn Roe v. Wade, we can – and must – work to defeat the “Respect for Marriage Act” and same-sex “marriage.”

The most important thing we can do now is to pray. We cannot win this fight by ourselves: “Apart from Me you can do nothing,” Jesus tells us (John 15:5).

How often do Catholics complain about the moral state of the country but fail to regularly pray the Rosary, go to Confession, or make Holy Hours? Our Lady stressed the First Saturday devotion, but how many fulfill it?

If every faithful Catholic in America started adoring Our Lord in the Blessed Sacrament, praying the Rosary, and evangelizing even just their own families, America would perhaps change quickly.

Our Lady revealed to Blessed Alan de la Roche the incredible effects that the Rosary, “the anchor of salvation for society,” had on areas once dominated by the Albigensian heresy:

Through the Rosary, hardened sinners of both sexes became converted and started to lead a holy life, bemoaning their past sins with genuine tears of contrition. Even children performed unbelievable penances; devotion to my Son and to me spread so thoroughly that it almost seemed as though angels were living on earth. The Faith was gaining, and many Catholics longed to shed their blood for it and fight against the heretics. […] People led moral and law-abiding lives and worked wonders for the glory of God. Holiness and unworldliness flourished; the clergy were exemplary, princes were just, people lived at peace with each other, and justice and equity reigned in the guilds and in the homes.

By God’s grace, that could also be our society, devastated as it is by sin and confusion.

There’s much to do in the political sphere as well, potentially including court challenges to the RMA, which several conservative groups have suggested.

“Congress has absolutely no authority to regulate marriage within the several states,” Liberty Counsel president Mat Staver has said, arguing that the bill “will be defeated in the courts.”

As Dr. Albert Mohler Jr. said, another top priority is holding our representatives accountable: “We need to take their names. And when they come back up for reelection, we need to remember this. Because if they will defy creation order in this sense, what would they not defy?”

Sen. Mitt Romney of Utah and all of those House Republicans will be up for re-election in 2024.

We have to make clear to those who represent us that marriage is a non-negotiable issue and that we will not tolerate betrayal of our core beliefs on marriage and the family.

As with the pro-life movement, our goal ultimately must be to change the culture, winning people over to the truth about marriage and making homosexuality unthinkable again.

It really shouldn’t be that hard. Like transgenderism, same-sex “marriage” and homosexuality are actually totally insane and make a mockery of biological reality.

It’s an indisputable fact that sexuality exists for the sake of procreation. But homosexuality twists sexuality for a completely contrary, sterile purpose. Unlike a man and a woman, two members of the same sex can neither produce children nor give them the unique, irreplaceable love of a mother and a father.

In marriage and parenting, men and women compliment each other in ways that two homosexuals never can. “Not even in a remote analogous sense do homosexual unions fulfill the purpose for which marriage and family deserve specific categorical recognition,” in the words of the Church.

A relationship between a man and a woman is impossibly different than one between two members of the same sex, and it is an enormous lie claim otherwise. If marriage can mean both a complimentary union that produces life and a perverted, objectively disordered relationship that misuses sexuality, then marriage means nothing.

Anyone who believes otherwise has bought into an absurdity no less ridiculous or anti-scientific than transgender ideology. Sex matters for sports, bathrooms, and healthcare, and it also matters for marriage.

Attempting to root marriage in “desire” and “consent” untethered from truth, as supporters of same-sex “marriage” do, tramples on the nature of sexuality and the human person.

Moreover, if perverted sexual desire and consent are enough to make a legitimate marriage, why not recognize incestuous relationships? Why not polygamy? Democratic cities and judges are already moving in that direction, citing the precedent of homosexual “marriage.”

Of greatest importance, homosexuality and same-sex “marriage” deeply offend God and are incompatible with Christianity. As with abortion, no true Christian can support them, a fact that needs to be impressed on our lawmakers and fellow citizens who claim to follow Christ.

Sacred Scripture – the Word of God – couldn’t be clearer about these issues. St. Paul condemns sodomy throughout his epistles, stating bluntly that those who practice it “will not inherit the kingdom of God.” He explicitly condemns homosexual acts as “shameless” and “unnatural,” adding that those who practice them will receive “in their own persons the due penalty for their error.” Jesus Himself proclaims the definition of marriage as specifically between one man and one woman.

The Apostolic Tradition has unfailingly recognized homosexuality as a serious, intrinsic evil. The first-century Didache, or “The Teaching of the Twelve Apostles,” one of the earliest-known Christian writings, names sodomy as a grievous crime, alongside adultery and murder, against the second part of Jesus’ Great Commandment, “Love thy neighbor as thyself.”

The Church declares to this day: “Basing itself on Sacred Scripture, which presents homosexual acts as acts of grave depravity, tradition has always declared that ‘homosexual acts are intrinsically disordered.’”

Opposing homosexuality isn’t optional for those claiming to be Christian, it’s a requirement. Compromising on same-sex “marriage,” as those who voted for the “Respect for Marriage Act” did, isn’t a permissible form of “tolerance,” but directly cooperates in a grave evil condemned by God.

One of the saddest results of same-sex “marriage” – and one of the most powerful arguments against it – is that it deprives children of the fundamental human right to a mother and a father.

As noted by Katy Faust, a children’s rights activist who was raised by lesbians and now advocates against homosexual “marriage,” good data shows that children suffer significantly when brought up in a homosexual household:

“Turns out you can’t legislate away the benefit that children receive from being raised by their own mom or dad, even if you call it marriage,” Faust said.

Other research has found that children raised by same-sex partners are more likely to engage in risky sexual behavior and drug use, and that girls raised without a father are at greater risk of teen pregnancy and even tend to go through puberty earlier.

Children of sperm donors, meanwhile, “are significantly more likely than those raised by their biological parents to struggle with serious, negative outcomes such as delinquency, substance abuse, and depression, even when controlling for socio-economic and other factors,” a 2010 report detailed.

Putting adult desire before children’s needs is selfish and shameful, and it’s exactly what homosexual “marriage” does.

Pro-marriage conservatives are not alone

As it stands, there are still tens of millions of people in America who recognize the authentic, biblical reality of marriage.

Throughout the debate over the RMA, polling consistently found that Republican voters opposed the bill, and in multiple states, more voters of any party opposed it than supported it, even before learning that it poses grave threats to religious liberty.

There are also many officials who continue to uphold traditional marriage, and they won resounding victories across the country in the midterms last month, including in battleground states.

Contrary to what the media wants everyone to think, adhering to basic morality isn’t that uncommon and it isn’t electoral suicide.

In recent years, conservatives have actually won major victories against the LGBT movement. Revolt against radical LGBT ideology fueled Republicans wins in Virginia last year and in countless school board races. Several states have recently banned homosexual and transgender indoctrination in schools and “gender transitions” for minors, and more are likely to follow suit. Popular Republican leaders like Ron DeSantis have made opposition to the LGBT agenda central to their political brands.

And though the pushback to the “Respect for Marriage Act” wasn’t enough to stop the bill, it proved that a lot of people are still fired up about defending marriage and traditional values.

A Democratic senator who championed the RMA told Politico last week that “attempts to derail this piece of legislation were probably more focused and robust than any other bills I’ve worked on in the last two years.” Opposition to the RMA was “very, very strong,” she said, much more so than opposition to controversial gun control and infrastructure bills that Biden has signed.

Now isn’t the time for pro-family, pro-marriage conservatives to get discouraged, but to push back even stronger, confident that we can win with God behind us.