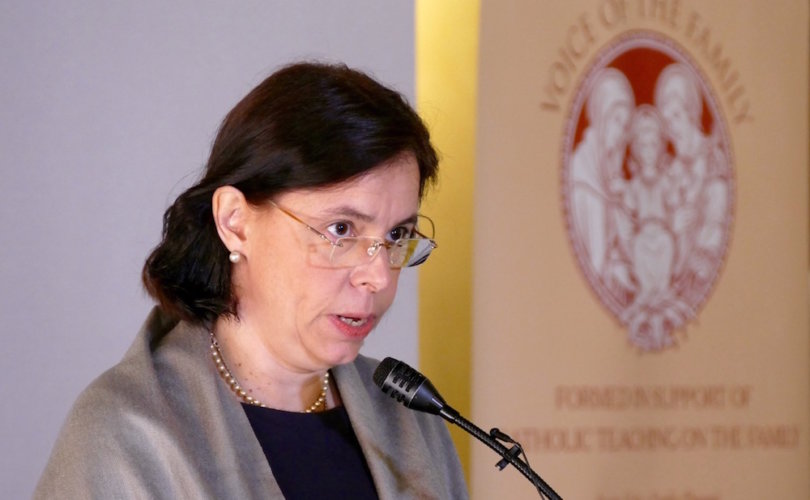 ROME, May 16, 2016 (LifeSiteNews) – Instead of leading faithful Catholics in battle against forces of evil that seek to undermine and erase Christianity’s mark on civilization, the Catholic Church under the leadership of Pope Francis is kowtowing to problematic ideological systems that are opposed to life, family, the well-being of society, and ultimately, to the Gospel of Jesus Christ, said Dr. Anca Cernea of Romania in a talk given at an international life-and-family conference in Rome last week. She urged conference participants to earnestly pray that Catholic shepherds return to their primary “duty” of saving souls through evangelization and conversion.

See the full text of Dr. Cernea's talk here at Voice of the Family.

“We are worried to see the Church descending into an earthly ideologically-contaminated activism that encourages some ‘progressive’ groups that have a perfect plan on how to build a perfect world (after they are done with this one) – like the ‘popular movements,’ environmentalists, pacifists, indigenists, ‘anti-discrimination’ activists, and ‘population experts,’” she said during her May 6 talk given at the Rome Life Forum taking place in the Hotel Columbus, located steps away from St. Peter’s Basilica.

Cernea, who has lived and suffered under a communist regime, said that language used by Pope Francis in his encyclicals Evangelii Gaudium and Laudato Si' is especially concerning since it appears to come more from ideological textbooks inspired by communism rather than from the Gospel of Jesus.

She expressed concern that the Church under Pope Francis’ direction is aligning herself with ideologically driven agendas and is not only failing to be a source of light to nations worldwide, but is even being used by powerful organizations to push an agenda contrary to the Gospel and to God’s reign on earth.

“Instead of preaching the True God to pagans and convert[ing] them, [Catholic leaders] get used by the pagans against the True God,” she said. One need only recall the “climate change” light show projected on St. Peter’s Basilica on the Feast of the Immaculate Conception to mark the opening of the Year of Mercy last December as an example of Cernea’s point.

Cernea received the praise of life and family leaders around the world last year after powerfully pleading with Pope Francis and other Catholic leaders during the Synod on the Family to defend the family from international forces seeking to impose “population control, reproductive health, gay rights, gender education” on nations worldwide.

Cultural Marxism and the real enemy

Cernea warned conference participants that there are real “spirits of evil” that are seeking to “re-design human society and human nature” that must first be recognized as the source of the assault on God’s creation before they and their plans can effectively be opposed. She said that one label that can be applied to the systematic attack on life, marriage, family, and sexuality is “Cultural Marxism,” one of “Russia’s errors” warned against by Our Lady of Fatima in 1917.

The Romanian doctor related how communism was the first to put into law the various perversions of morality that we are now enduring in the West. She stated,

“Historically, abortion was decriminalized for the first time by Lenin, in 1920.

In America, it was only done 53 years later, in 1973, through the famous trick of the Roe vs. Wade case.

No-fault divorce was enacted for the first time in the Soviet Union 1918, shortly after the Bolsheviks took power.

For America, it took 51 more years until 1969 no-fault divorce was adopted in the state of California.

Radical sex education for school children was first introduced in 1919 in Hungary, by Béla Kuhn’s Bolshevik revolution, with the clear purpose to undermine the traditional family and morality by destroying children’s innocence.

In America it took until the 60s, when the perverse sex education under the influence of Alfred Kinsey’s fraudulent “research”, widely publicized thanks to the funding from Rockefeller Foundation, made its way into the schools.”

“Communism was spread in two ways: One was through brutal military invasion, concentration camps, prisons, political police and government terror, one hundred million people being killed by their own governments in times of ‘peace.’ … The other way was through insidious cultural subversion, aimed at destroying the moral resistance of the Free World, and making it unable to defend itself against Communism. This is what was done in the West, mainly through ‘Cultural Marxism,’” she said.

“Cultural Marxism was devised since the beginning [of Communism] as a tool to morally and culturally undermine the West and make it an easier prey for the communists to take over. It appears nowadays to be even more revolutionary than classical Marxism – it pretends to reinvent the family, sex[ual] identity, and human nature,” she added.

Cernea called Cultural Marxism a “form of revolt against God, against His moral Law and the order of His Creation.” She said that Cultural Marxists view the Catholic Church as the most important institution to “infiltrat[e] and take-over” in order to bring about their masterplan for the world and its people. She suggested that such an infiltration appears to be aggressively happening under the reign of the current pontiff.

She lamented how the Church under Pope Francis now deems it acceptable to dialogue with leaders of the Cultural Marxist movement and to partner with their powerful organizations. For example, life and family leaders have expressed outrage numerous times (here or here) at seeing population control and abortion rights advocates given platforms or positions of prominence at recent Vatican workshops and events.

Cernea said, that now, more than ever before, it is critical for the Catholic Church return to its mission of saving souls from the evil one’s ever expanding clutch.

“Thus, for the eternal salvation of millions of souls, the Church should be leading the fight against ideologies, and especially against Cultural Marxism, both in [her] public teaching and in [her] confession,” she said.

She said that Christians around the world must oppose movements within and without the Church that seek to concentrate power in the hands of a few in order to bring about a so-called “wonderful world.”

“The revolutionists will always use this power against Christianity,” she said.

“Then we shouldn’t be surprised if society is secularized, charity is replaced by welfare, education is replaced by ideological indoctrination and outright moral perversion, the care for the sick is replaced by euthanasia, freedom of conscience and of speech is replaced by government-imposed political correctness, and citizen’s life is regulated in detail by social engineers, the culture of life and family is constantly losing ground.”

“If we want to defend the family, we need to take the world back from the revolutionists,” she added.

But the only way to win any lasting victory on the life and family front is to “win the larger war for our Civilization” because “family and human life are only safe in the normality of Judeo-Christian Civilization,” she said.

“Our pro-life and pro-family goals are vitally important. However, if we only focus on them and don’t care about the rest, we won’t be able to keep them either. If we let the other side control everything else – language, culture, media education, legislation, economy, public life, government, health care, everything — then we shouldn’t be surprised that any victory we may happen to win for the family, in the best of the cases, will be short lived.”

Clear language drawn from the Gospel, not from current ideologies, is an “important condition for victory,” Cernea stressed.

“The Christian vocabulary has all it needs to describe reality. We don’t have to borrow language tools from the ideologies we are confronting; this allows them to occupy the moral high ground and relegate us to a defensive position, before any debate has even started.”

Cernea said it is the “duty” of Catholic shepherds, especially the pope, to safeguard language and to use it wisely and appropriately.

“They should preach the Kingdom of God and His justice, not socialist ‘justice,’ understood as government control over economy, or income redistribution. They should preach peace as offered by Christ, not as stated by the UN….The Church shepherds should preach real freedom, which is liberation from sin, from the slavery of Satan,” she said.

Cernea said that Church leaders using “confusing, politically correct, ideologically-contaminated language…instead of God’s Word, leads many Catholic societies into moral and political confusion, and to defeats in the culture war.”

“The faithful become unable to identify the source of the attacks against life and family and to fight them successfully. Such language used by Church leaders is a signal for the lay people who engage in politics to ‘turn left only.’ It makes it practically impossible for Catholic politicians to support free market, to oppose the nanny state, to oppose Muslim immigration, to be skeptical about climate change, and about the role of the UN. Because if they do, they will have to say things that are different or opposed to what the world hears from the Church. So they either get discredited as Catholic politicians, or they get forced to support leftist causes.”

She urged faithful Catholics to pray for their shepherds that they have the eyes to see the real battle at hand and the courage to lead the faithful to the frontline.

Cernea concluded her talk by asking,“How do we fix the world?” and answering, “Seek ye therefore first the Kingdom of God, and His justice, and all these things shall be added unto you.”

“The earthly normality of Christian Civilization with all its benefits is just a secondary product of evangelization; it belongs to ‘those things that shall be added’ unto us, if we ‘seek first the Kingdom of God and his justice,” she said.

“The real priority for the Church should be to lead us in the spiritual battle, to save souls, to tell the whole world…’Repent of your sins and turn to God, for the Kingdom of Heaven is near,” she added.

* Cardinal Burke: We must ‘resist’ those in the Church presenting false teaching on marriage, sacraments
* Gender ideology and other dogmas of the new global order
* Voice of the Family calls on Pope Francis to withdraw Amoris Laetitia
* Building a Catholic resistance movement