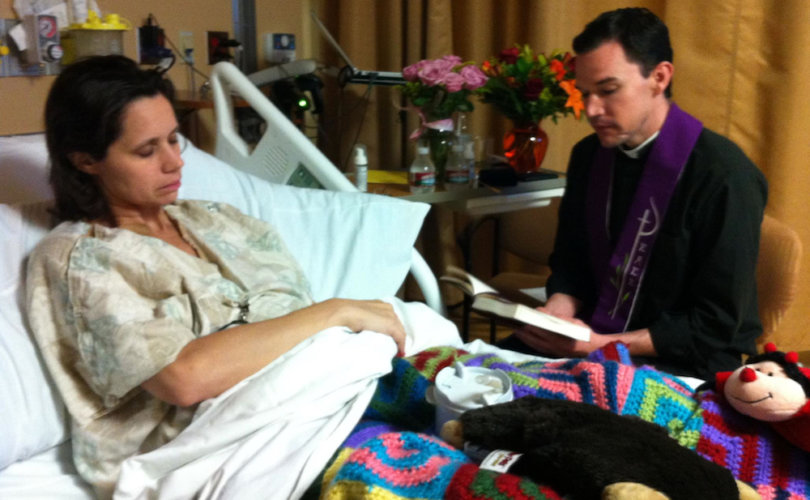 Angela Faddis is anointed by a priest in the hospital.

April 27, 2017 (LifeSiteNews) – A Catholic alternative to expensive healthcare has become available that won’t compel subscribers to subsidize abortion or anything in conflict with their faith.

Solidarity HealthShare, a medical cost-sharing plan, looks to restore and rebuild an authentic Catholic healthcare system that respects the Church’s teachings, including the sanctity of human life, according to the group’s website.

Solidarity partnered with an existing health cost-sharing ministry, meaning that Solidarity members are not subject to the Obamacare restriction limiting the ability to avoid paying the penalty for being uninsured to members of ministries in existence before 1999.

It offers the opportunity to share medical expenses with anyone who professes Catholic beliefs and values.

Solidarity HealthShare is based in Tempe, Arizona.

The group cites the Catechism of the Catholic Church for its approach to keeping costs down through a lifestyle of wellness, health, and prevention.

“We understand that life and physical health are precious gifts entrusted to us by God and that we must take reasonable care of them,” it states.

Solidarity, co-founded by Chris Faddis, was born of the hardship of medical costs associated with caring for his late wife, Angela Faddis, who passed away in 2012.

After Angela’s treatment for Stage IV colon cancer was ineffective, the couple sought other options for treatment. Her prognosis was grim and the family was desperate to find anything to save or prolong her life.

They found a number of treatment centers that offered some advanced alternatives, which gave them more hope. The problem was, those treatments weren't covered by insurance, and they didn't have the money to cover them out of pocket.

Chris Faddis told LifeSiteNews that “on a wing and a prayer” he turned to his community and asked for help.

In one night, the family raised $10K, and by the end of 30 days they’d raised $35K online, plus thousands more through other fundraising opportunities.

“The community answered the family’s need and Angela received these treatments,” Faddis said. “The treatments worked to slow the cancer down and even shrunk many of the tumors drastically.”

Angela lived much longer than her prognosis projected, he told LifeSiteNews, and while she still passed away, those extra months were a Godsend.

“The community that surrounded us in prayer and financial support was a very real example of the communion of saints and the communion we all have as Catholics,” he stated. “I hoped and prayed that I could find a way to create a sustainable method of providing support like this for others.”

After praying a Novena to the Holy Spirit during Pentecost the following year, Faddis and his friend, Dr. John Oertle, began talking about healthcare sharing and whether it was a possible answer to Catholic and Christian concerns about Obamacare.

They discerned that not only did healthcare sharing provide what they thought was the best way to solve Catholics' ethical healthcare concerns, it was also the best avenue to provide a sustainable model to provide support for medical needs.

Faddis and Oertle asked Brad Hahn to join them, and since then they have been building a community of Catholics who share medical expenses with one another.

“Solidarity provides for one another a safe and sustainable way to pay for healthcare without violating our conscience,” Faddis said.

“The delivery of medical treatment in our country desperately needs moral reform and the guidance of our Catholic faith,” Hahn stated, “as the Church’s social teachings and morally sound bioethics can shed light on how true healthcare reform should take shape.”

“There are many moral concerns regarding health care in our country,” Hahn continued. “Medical care and treatment is now often determined by what procedures and treatments insurance companies will pay for, and doctors diagnose and treat illness and disease based on the standards established by Medicare — not the individual discretion of the doctor in collaboration with the patient.”

Further, Hahn said, even if the Obamacare provisions that violate Catholic moral teaching are deleted under the federal government’s “repeal and replace” plan, the question of conscience will still need to be resolved at the state level.

Healthcare sharing is also a great example of subsidiarity and solidarity in action, he said.

Chris and Angela Faddis approached Angela’s diagnosis as an opportunity to share God’s love with others, and Chris wrote a book about the experience.

The Solidarity HealthShare ministry is a continuation of this sharing.