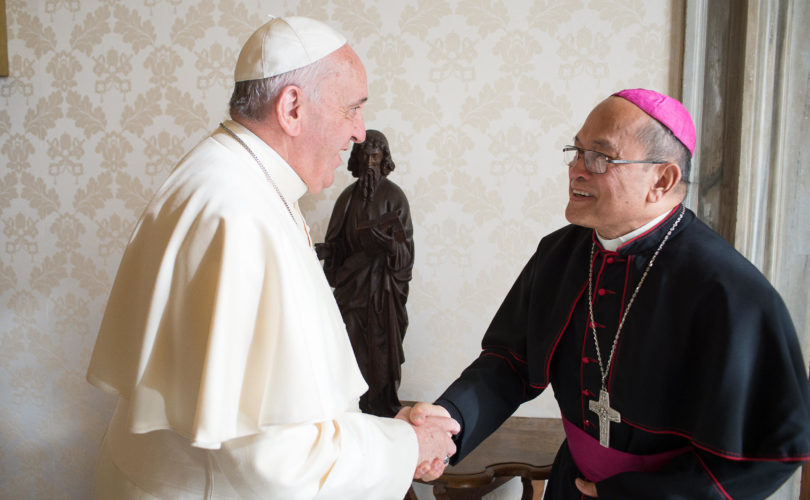 “Homosexual condition or tendency is a disorder,” Archbishop Anthony Sablan Apuron said. “Many hate the Church for saying that, but if the act is intrinsically a moral evil, we cannot say the tendency is neutral or good. If then, we don’t call it a disorder.”

“When we take God away from the source of human identity, then we are lost,” he said. “As citizens and as a people of faith, we have the duty to be informed about the very fundamental nature of marriage and we are called to defend the very dignity of marriage as a loving and fruitful union of one man and one woman.”

In two statements, a February AP interview published April 13 by the Archdiocese of Agana,  and a diocesan statement published April 20, the archbishop spoke out on Church teaching on homosexual “marriage” while differing opinions from Guam leaders has left the island in conflict on the issue.

While Guam falls under the 9th U.S. Circuit Court of Appeals in San Francisco, which has ruled in favor of homosexual “marriage,” Calvo has pointed out that the 6th U.S. Circuit Court of Appeals has upheld state bans on same-sex “marriages,” and proposed that either Guam lawmakers could pass a law allowing homosexual “marriage” or it could be put before voters in a referendum.

Two Guam women who sued April 13 after their marriage license application was refused the week prior said they will move forward with their suit after the governor and health department challenged the attorney general’s directive.

No judge has ruled thus far on Guam’s case, and the island territory would become the first in the Pacific or Caribbean to legally redefine marriage. The U.S. Supreme Court heard arguments on homosexual “marriage” last week.

Archbishop Apuron clarified Church teaching for the AP in February.

Homosexual acts are disorders that go against the finality of the sexual act, the archbishop said, and the homosexual tendency is not due to negative choice, is not a personal fault, and therefore morally speaking, those suffering from this are not responsible for the tendency.

“Same-sex marriage goes against nature,” he said, “and as consequence is objectively contrary to God’s Law.”

He explained that legalization of homosexual “marriage” by the State means the state cannot refuse homosexual couples the right of adoption.

“As a consequence, the state is no longer interested in the good of children, but in the perspective of same-sex couple ideology,” the archbishop stated. “Hence, based on this erroneous principle, the right to be in a same-sex union is superior to the interests of children.”

He addressed the current action toward legal redefinition in Guam in his April diocesan statement.

“The recent move to enforce same sex unions upon the people of Guam is an offense against human reason and to the traditions and religious sensibilities of the great majority of the people,” the archbishop said.

Governments, attorneys, and courts cannot redefine marriage to include homosexual partnerships by appealing to equality, he said, because the argument of equality does not apply to all relationships.

“For example, parents can’t marry their children. Brothers and sisters can’t marry,” the archbishop pointed out. “People below a certain age can’t marry. People who are already married can’t marry.”

He also noted that governments have recognized the nature of marriage for the well-being of children and the promotion of family life.

“Does that recognition involve distinctions? Yes,” he said. “Does it result in injustice? No.”

Regardless of how deep the affection or desire, it is physically impossible for two men or two women to consummate a marital union, Archbishop Apuron said.

“To apply the reality of ‘marriage’ to a same-sex union is an affront to human reason,” he said. “The state’s civil same sex union law will coerce citizens to pretend to accept a physical impossibility. This is morally unacceptable.”

Archbishop Apuron also clarified the Church’s approach to people with homosexual tendencies in his diocesan statement.

“The Church is not against persons who may have homosexual tendencies,” he said. “We are opposed to same sex unions because it is a threat to the very definition of marriage.”

“Christ sanctified marriage as a sacrament for the baptized to create a permanent relationship that goes beyond natural reality,” he said. “The government did not invent marriage. The government cannot re-define marriage.”