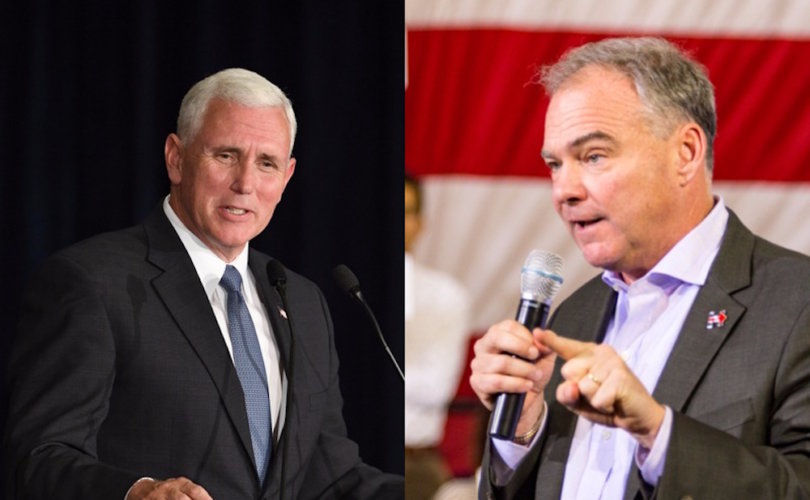 The Washington Post reports that “Debate moderators suggest Mike Pence and Tim Kaine are basically the same person,” but a quick look at the record of each candidate shows a world of difference in approaches to the right to life, natural marriage, and family issues.

Kaine claims his faith is Roman Catholic, yet he “strongly” supports abortion-on-demand.  “I'm a strong supporter of Roe v. Wade,” Kaine told CNN in July.  “We don't need to make people's reproductive decisions for them.”

Following the lead of self-identified Catholic Democrats like Ted Kennedy and Mario Cuomo, Kaine says he is “personally against abortion,” but his record is given the highest praise by Planned Parenthood.  The National Abortion Rights Action League (NARAL) gave Kaine a perfect, 100 percent, abortion supporting score.

As governor, Kaine cut off state funding for abstinence-only sex education programs, insisting that contraceptives must be taught in schools.

As early as 2006, then-Governor Kaine fought against a state constitutional amendment to affirm marriage as between one man and one woman.  He supports homosexual “marriage.”

In fact, Kaine has admitted that he does not believe Christian teaching on homosexuality, saying in September that his support for same-sex “marriage” is “at odds with the current doctrine of the Church,” and he predicted the Catholic Church's doctrine will change on homosexuality.

Furthering his support for the gay agenda, Senator Kaine not only supported but co-sponsored legislation which included “sexual orientation” in anti-discrimination laws, reasoning that when people pursue homosexuality, they are “just…being themselves.”  He also supported legislation allowing lawsuits for “gender pay discrimination.”

Sen. Kaine also fought for non-married couples to adopt children, telling the Washington Post in 2012, “There should be a license that would entitle a committed couple to the same rights as a married couple.”

Kaine supports ObamaCare, stating, “I was a supporter and remain a supporter of the Affordable Care Act.”

Far from being “basically the same person,” Indiana Governor Mike Pence is the political polar opposite of Kaine on abortion, sex education, marriage, homosexuality, same-sex “marriage,” and ObamaCare.

On abortion, Gov. Pence has championed prolife legislation making it illegal to abort a baby on the basis of sex, race, nationality, or disability – including Down syndrome.

He worked to pass laws which require the respectful burial or cremation of aborted babies and stop Planned Parenthood's contracted practice of treating those babies as medical waste, or using them for experimentation.

He supports defunding Planned Parenthood of tax dollars completely.  In fact, while in Congress, Pence led the effort to defund the nation’s largest abortion business in 2007, by seeking to prevent any business which does abortions from receiving Title X funds.

The prolife champion also promoted umbilical cord donation as the alternative to destructive embryonic stem cell experimentation, and he sponsored measures which protect citizens from being forced to pay for abortion coverage.

On homosexuality, Pence is very clear, stating in 2000, “Congress should oppose any effort to recognize homosexuals as a 'discrete and insular minority' entitled to the protection of anti-discrimination laws similar to those extended to women and ethnic minorities.”  He also supported funding reparative therapy, instead of using federal funds for “organizations that celebrate and encourage the types of behaviors that facilitate the spreading of the HIV virus.”

Trump's running mate opposed hate crimes legislation promoted by President Obama, out of concern that it would “advance a radical social agenda,” and that Christian ministers “could be charged or be subject to intimidation for simply expressing a Biblical worldview on the issue of homosexual behavior.”

Pence opposed the repeal of President Bill Clinton's “Don't Ask, Don't Tell” policy of subduing open homosexuality in the military.  Going even further, the pro-marriage champion flatly stated his opinion that open, practicing homosexuals should not serve in the U.S. military, because “the presence of homosexuals in the ranks weakens unit cohesion.”

As a congressman, Pence championed the American family, stating in 2006, “Societal collapse was always brought about following an advent of the deterioration of marriage and family.”

As is well known, Gov. Pence signed Indiana's Religious Freedom Restoration Act, which allowed Christians and other people of faith and morals to recuse themselves from the involvement in or the enabling of acts which betray their faith.  The law met with such national backlash from by-then-entrenched gay activist pressure that Pence was forced to water the legislation down, making it essentially ineffective.

Pence voted against ObamaCare, and criticized it for its forced abortion coverage mandate.

As a result of these obvious disparities between the candidates –even though both claim to be faithful Christians, the Indiana Right to Life has endorsed Pence for Vice President. A press release from the prolife organization stated summarily, “Gov. Pence’s pro-life stance is more than a talking point; Gov. Pence has put his pro-life position into action time and time again.”

Contrasting the prolife platform of Trump/Pence against the pro-abortion platform of Clinton/Kaine, IRTL summarized, “Gov. Pence brings his pro-life credentials to the Trump presidential ticket. In contrast, Hillary Clinton has sought to expand abortion access and fund the life-ending procedure with our tax dollars. She has a cozy relationship with the abortion industry and cannot be trusted to protect life.”

IRTL President and CEO Mike Fichter assured LifeSiteNews, “Mike Pence is pro-life in word and deed.  He is a tireless advocate for the unborn and their mothers.”

“We believe he will bring his strong stand for life to a Trump Administration.”