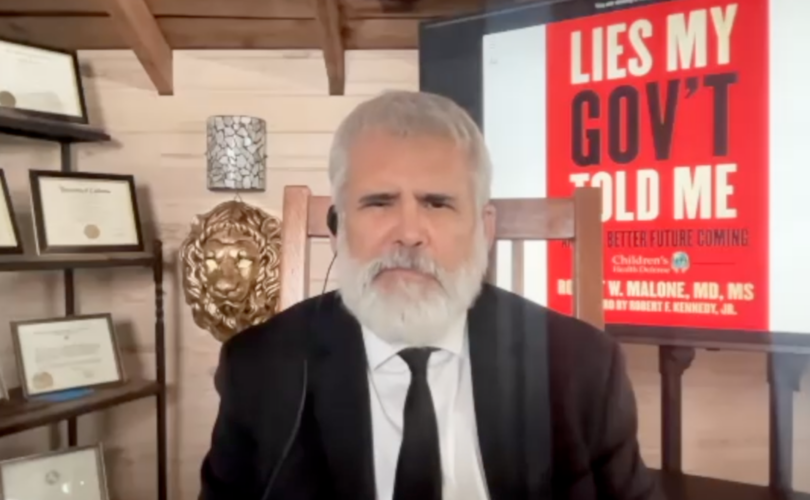 Note from LifeSiteNews President Steve Jalsevac: Be sure to watch the entire video interview with Dr. Malone. He confirms much of what we have been presenting to you since the beginning of the COVID pandemic, plus much more that he has discovered from his own research and relationships with numerous courageous leaders and individuals. He relates the painful and humbling learning process that he has gone through and the necessary ‘unlearning’ of false, previous views that resulted from a naïve trust in medical and other authorities. Like many of us and yourselves, Dr. Malone has had to dramatically revise past misconceptions and trust in many who have proven to not be worthy of any trust. This is a story of an honest, high-level medical and scientific professional baring his soul about the horrendous things that he previously had not the slightest idea about. If such a prominent physician/scientist can now be open to the validity of extraordinarily evil realities in the world today, and willing to endure all the ridicule that comes with that acceptance of hard truths, then it will be possible for us to also convince many others to awaken from their hypnotic state of trust in authorities who are in fact evil oppressors needing to be aggressively opposed for the good of all mankind.

(WND News Center) — The coronavirus pandemic has been a revelation to many, not least to Dr. Robert Malone, the pioneer of the mRNA technology platform used in the Pfizer and Moderna COVID vaccines he vehemently opposes.

In a new book, “Lies My Gov’t Told Me and the Better Future Coming,” he recounts going from – in the eyes of establishment media and government – esteemed vaccine inventor to purveyor of “misinformation.”

Malone sets the stage with an opening chapter intriguingly titled “How I Got Red-Pilled, and the Gradual Reveal.”

In a video interview with WND, he recalled once being a devoted reader of The New York Times and The Atlantic magazine.

He devoted his career, he said, to learning and assimilating good practices and adhering to ethical standards.

“And then to see all these things just thrown right out the door, as if they’re the trash, with no awareness of consequences.”

When Malone began speaking what he believed to be the truth – he believes “time has validated pretty much all of what I have said” – he “encountered this weaponized information ecosystem of derision and lies and defamation and slander.”

The book – written with his wife, Jill Glasspool Malone – includes chapters by other outspoken physician scientists, including Drs. Meryl Nass, Paul Marik, and Pierre Kory. And there’s one by Ed Dowd, the former Wall Street analyst who has compiled evidence from the insurance and funeral industries, and government databases showing a spike in excess deaths corresponding to the rollout of the COVID mRNA vaccines.

Over the past three years, Malone said, it’s become clear that humanity is at a historic point in which it is confronted with two visions for the future.

“They are almost polar opposites: one is a globally centralized, totalitarian, utilitarian, Marxist, command economy version of the world that is truly captured by this phrase ‘you will own nothing and you will be happy,’” he told WND, referencing a tweet by the World Economic Forum.

Welcome to 2030. I own nothing, have no privacy, and life has never been better @IdaAuken https://t.co/6BKymvbKB5 pic.twitter.com/YJjAkw8skS

The “contrapositive” to that vision, he continued, is “an organically arising world that is decentralized, that is still committed to nation states and more local control structures.”

In his many travels around the world during the pandemic, he has observed the emergence of “intentional communities” based on faith or a shared endeavor, such as farming.

They are finding ways, he said, to work together and even connect globally “without the need for some autocratic, centralized control.”