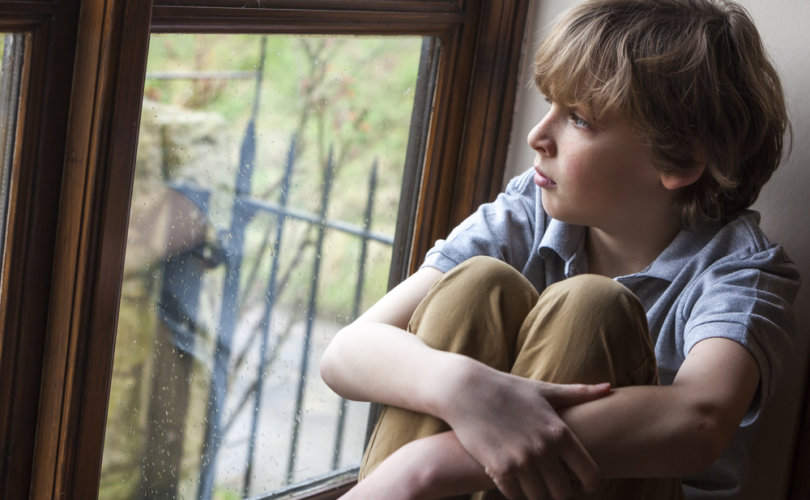 July 11, 2016 (LifeSiteNews) — A new study released earlier this month in the journal Depression Research and Treatment contributes to mounting evidence against the “no differences” thesis about the children of same-sex households, mere months after media sources prematurely — and mistakenly — proclaimed the science settled.

One of the most compelling aspects of this new study is that it is longitudinal, evaluating the same people over a long period of time. Indeed, its data source — the National Longitudinal Study of Adolescent Health — is one of the most impressive, thorough, and expensive survey research efforts still ongoing. This study is not the first to make use of the “Add Health” data to test the “no differences” thesis. But it’s the first to come to different conclusions, for several reasons. One of those is its longitudinal aspect. Some problems only emerge over time.

Professor Paul Sullins, the study’s author, found that during adolescence the children of same-sex parents reported marginally less depression than the children of opposite-sex parents. But by the time the survey was in its fourth wave — when the kids had become young adults between the ages of 24 and 32 — their experiences had reversed. Indeed, dramatically so: over half of the young-adult children of same-sex parents report ongoing depression, a surge of 33 percentage points (from 18 percent to 51 percent of the total). Meanwhile, depression among the young-adult children of opposite-sex parents had declined from 22 percent of them down to just under 20 percent.

To be fair, life in mom-and-pop households is not simply harmonious by definition. It is, however, a recognition that it is not just stability that matters (though it most certainly does). It’s also about biology, love, sexual difference, and modeling.

Additionally, more kids of same-sex parents said “a parent or caregiver had “slapped, hit or kicked you,” said “things that hurt your feelings or made you feel you were not wanted or loved,” or “touched you in a sexual way, forced you to touch him or her in a sexual way, or forced you to have sex relations.” In fairness, this is a grouping of traumatic events that strikes me as unbalanced, what with the rather profound difference between hurt feelings and molestation. A follow-up inquiry revealed very few reports of the latter among Wave IV respondents.

This study is not above reproach. No study is. And I dare say Sullins’s recent evaluations of National Health Information Survey data provided a more robust evaluation of the “no differences” thesis than this one of the Add Health. A key limitation here is sample size. There are only twenty confident cases of respondents with same-sex parents in this large data collection project. This makes the same-sex household estimates displayed in the graph imprecise, but it does nothing to undermine the significance of the differences between groups. Part of the reason for the small sample has to do with the era in which the data collection first began. Same-sex households were very unusual, and the Add Health (as well as the New Family Structures Study) captures that. I have been quick to criticize use of such small-N studies in the past, and I’m not about to shift blindly into high praise here just because the results reinforce what I found in the NFSS. But the sample size issue is not the author’s fault. In fact, Sullins discerned that over half of the cases of same-sex households used in previous Add Health studies that declared “no differences” were households in which an opposite-sex parent was still involved, and elected to drop them from his analyses. It mattered.

Lingering questions remain. Why the surge in depression after becoming adults? This is especially curious given that the “distance” from their parents diminished since adolescence. Why such high rates of obesity? (It’s certainly not the media-tailored image of the same-sex parenting movement.) The author himself holds that any such answers would be “necessarily speculative.” Why is it published in an open-source medical journal rather than a social science journal? I don’t presume to know the process, but I would hazard a guess that rather than endure the increasingly politicized nature of peer review in the social sciences, the author prefers a less freighted avenue that allows scholars and public alike to examine the evidence rather than await the benighted imprimatur that a more prestigious pay-walled journal can give (and has given) to far weaker studies. If science is supposed to be open, Sullins’ work is certainly that. I don’t blame him.

Sullins has emerged as a versatile analyst, applying the same questions to multiple datasets. I have met him, and can attest that his motivations are similar to mine: We have seen the data and we are convinced that they cannot sustain the “no differences” thesis except by torturing them. (That is, by hiding the basic story behind sets of control variables, or worse, concealing it within privately held data that no one else can scrutinize.) But that is exactly what a media-driven, scholar-fed political movement accomplished. Why did it have to happen this way?

For whatever reason — and I welcome intellectual assessments of the phenomenon — there is a nonpartisan American tendency to draw ethical conclusions from empirical data. What is matters a great deal here. But discerning what is among a small, politicized minority reaching for unique rights is fraught with challenges. Hence the battle over what the data have to say about same-sex households with children took on incredible urgency. If social scientists could document that the kids were all right, it would answer the ethical and legal question of what to do next. Hence the unbelievably politicized furor over research on this subject. Mind you, this is not how Europeans have elected to discern the matter of same-sex marriage and adoption — just us Americans. (A similar empirical contest is currently infusing debates about gun control.)

The social science on same-sex parenting will continue, but since the Obergefell decision “settled” the legal question about same-sex marriage, the skirmishes will be minor compared to the blood sport witnessed a few years ago. Empirical truth is no longer quite so threatening to the wishes of some adults. The vulnerability of children, on the other hand, has not abated.

Whether they get one of each or not, children deserve a mother and a father whose love for them — and for each other — is the source of their life and socialization. In his conclusion, Sullins concurs: “Well-intentioned concern for revealing negative information about a stigmatized minority does not justify leaving children without support in an environment that may be problematic or dangerous for their dignity and security.”

Mark Regnerus is associate professor of sociology at the University of Texas at Austin and a senior fellow at the Austin Institute for the Study of Family and Culture.