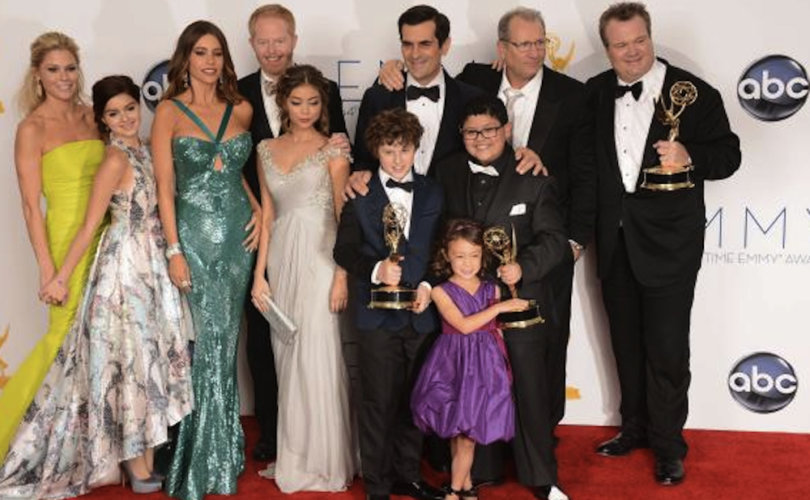 They told us that if we didn’t stay silent for the remainder of the flight, they would have to land in Hermosillo, deplane us, and have us arrested for ‘discrimination.’

MEXICO CITY, June 23, 2015 (LifeSiteNews) – I knew something had definitely changed the day my dad and I were threatened to be arrested for not wanting to watch the show ‘Modern Family’ aboard an airplane.

We were flying from Guadalajara to San Jose, California, on an airplane full of families with kids.

They both told us that if we didn’t stay silent for the remainder of the flight, they would have to land in Hermosillo, deplane us, and have us arrested for ‘discrimination.’

We quickly realized the program explicitly showed two men living as a couple and raising a baby, and asked a flight attendant if we could watch something else.

The flight attendant asked why we wanted to change the show and my dad simply replied he thought it was inappropriate for the kids on the flight to see two men raising a child.

The flight attendant became pretty upset. He told my dad that his request was “discrimination” and that he would take it up with the pilot.

Soon after, he came back with the chief flight attendant, a woman who was also very worked up at this point, and they both told us that if we didn’t stay silent for the remainder of the flight, they would have to land in Hermosillo, deplane us, and have us arrested for “discrimination.”

We really couldn’t believe what was happening. Now not only did we have to watch something we disliked on a flight we had paid for, but we were threatened with being arrested for asking the flight attendants to change it.

When we landed, we were pretty nervous and half-expecting to be handcuffed, which thankfully didn’t happen. Needless to say, any effort to file a complaint about these employees went unanswered.

That was almost five years ago, and many things have definitely changed since then.

Just last week, Mexico’s Supreme Court legalized homosexual unions throughout the country, overrunning state Constitutions, most of which say marriage is between one man and one woman.

Mexico, as every country in Latin America, is fighting the very same fight you are. It would seem they have some sort of agenda.

We too have kindergarten books that promote homosexual behavior. We too have to fight the government to not give contraception to our young girls.

The youth are continually bombarded with contraception and condom campaigns.

“When you use a condom, you have a 99% chance of staying awake at night partying, instead of having to change diapers. A condom is more reliable than fate,” we hear on the radio.

They even went to the extent of translating this to twelve different indigenous dialects so that everyone (and I mean everyone) could understand.

The children we’ve let live, that is.

Over 130,000 babies have been slaughtered inside their mother’s womb since abortion was legalized in Mexico City eight years ago. For this I am deeply sorry. I don’t know how we will ever heal from this.

Yes, my country has many wounds: poverty, hunger, the cartels, violence, insecurity, corruption, you name it, but abortion is by far the deepest wound of all.

As you can imagine, the UN and lots of feminist NGOs have set up camp here trying to impose their views in the name of ‘progress.’

So we must fight harder.

And, I believe that the truth LifeSite brings to the world through its news reporting is a big part of that fight.

Please know that you’re not alone in this battle. We’re all in this together. This fight for the freedom that only truth can bring is happening everywhere.

As a man I once interviewed said: “Being attacked and persecuted will become an inseparable part of our Christian identity,” and we must consider it a privilege.

So, even though it is sometimes really hard to report these sorts of events (I had to take a break during my last pregnancy because I could no longer take it), I do it in hopes that one day, countries like my Mexico, and the rest of the world, will go back to protect life and family once more.

Until that happens, I’ll keep writing for you.

Right now, LifeSite is at the end of its very important Summer Campaign. This fundraiser provides the resources we need to keep our journalists on top of the breaking news that affects life and family around the world.

I hope you will consider making a donation today to support our work.