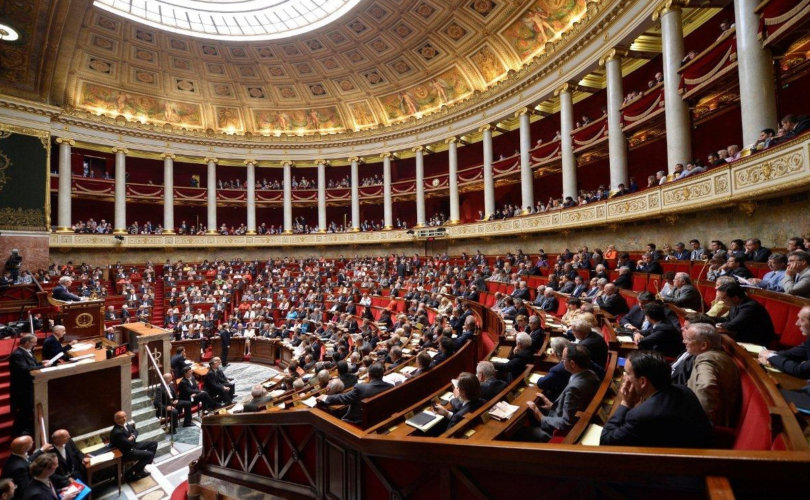 (LifeSiteNews) — In a highly symbolic move, the French National Assembly voted on Thursday to make “effective and equal access” to the “right to voluntary interruption of pregnancy” – the French official euphemism for abortion” a constitutional right.

337 members voted for the text presented by the extreme left “La France insoumise”(“France unsubdued”) party and its parliamentary coalition, NUPES, and only 32 voted against, while 18 abstained. The remaining members (there are 577 “députés” in the Assemblée nationale) did not join in the voting.

Remarkably, the Rassemblement national, successor of Jean-Marie Le Pen’s nationalist right-wing movement, the Front national, was divided over the issue and Marine Le Pen herself, Jean-Marie’s daughter, voiced her support for the inscription of abortion rights in the French constitution. She was officially noted as having voted for the draft law, but later the new party head, Jordan Bardella, indicated that she had been absent from the Chamber at voting time for “a medical reason,” and that she would have abstained if she had voted.

However, out of 89 Rassemblement national deputies, no fewer than 38 voted for making access to abortion a constitutional right. 23 voted against and 13 abstained. The remaining members did not take the trouble to express their opinion.

Most of the 62 Assembly members from the historic “center-right” party “Les Républicains” did the same; 13 voted for and only 7 against; 2 abstained. The vast majority of the left-wing members, including the presidential party (ironically called “Renaissance,” or “Rebirth”) approved the law.

The law itself is very concise. It proclaims that the French Constitution shall receive the following addition to its article 66-2: “The law guarantees effective and equal access to the right to voluntary interruption of pregnancy.”

The original text submitted by “NUPES” aimed to enshrine an “absolute right” to abortion that “no one may infringe.” With such wording, any legal limit on abortion could arguably be presented as unconstitutional, in particular the present 14-week time-limit (gestational age of the unborn child of 12 weeks) for unconditional access to elective abortion.

The revised text was the result of negotiations between La France Insoumise and its president Mathilde Panot, who had championed the original version, and the centrist MoDem party, which is part of Emmanuel Macron’s “Renaissance” group, and the socialists.

— Article continues below Petition —
Stand with pro-life priest Fr. Fidelis as he faces jail for defending unborn babies
Show Petition Text
13343 have signed the petition.
Let's get to 15000!
Thank you for signing this petition!
Add your signature:
Show Petition Text

Panot exulted when her text was adopted, proclaiming that this was “a historic signal that the National Assembly is honored to send to all women in our country, but also to all women in the world.” It was the result of a “collective consensus,” she added. This consensus was made possible by scrapping a constitutional “right to contraception” that was included in the law’s original wording, and that, according to Le Monde, would have been rejected by the right-wing dominated Senate which has yet to give the text its first reading. Is abortion more acceptable than contraception? Probably not, but financing “modern contraceptives” for millions of people of child-bearing age would represent a heavy burden on the French budget…

Politicians are clearly aiming to set up France as an example for the world. Under present laws, abortion is not technically a right but an exception and illegal abortion can still in theory be sanctioned under criminal law. Of course this never happens, even when women travel to neighboring countries to obtain abortions beyond the 14 week limit, and over the years, existing conditions such as a verified situation of social, economic, or psychological distress of the woman, a “cooling-off period,” and offers to help with material difficulties surrounding the pregnancy have been progressively deleted from the law. At the same time, pressure on women not to have abortions has been ever more heavily sanctioned.

If abortion rights as such are indeed carved in the cold stone of the Constitution, a new sad and somber step will be taken towards the fulfillment of the “culture of death.” Until now, only Tito’s communist Yugoslavia dared take such a step.

In another ironic episode, the president of the “Renaissance” group who had presented a similar text to make abortion constitutional, Aurore Bergé, made a surprise return to the Chamber only three weeks after having given birth in order to retract her own abortion text officially, in order to promote Panot’s version. “The issue of abortion is neither a whim, nor a political gain, nor a political group issue,” she said, adding that the Assembly should work “differently.” “If we can’t do this on the issue of women’s rights, then we can’t do it for any text,” she said.

The fight against making abortion a constitutional right in France is far from over, however. The law must be adopted in exactly the same terms by the Senate, and perhaps go through further readings, at the end of which the National Assembly will have the upper hand. If that is achieved, the changing of the constitution will be submitted to a public referendum.

Many questions remain. Why was the constitutionalizing of abortion suggested in the first place? It was launched because of the reversal of Roe v. Wade in the US, which was presented by many as a sign that “women’s rights” were in peril. Emmanuel Macron misguidedly suggested that the “right to abortion” be inscribed in the European Charter of Human Rights, which has no competence in such matters. It was his Renaissance party that first suggested making abortion a constitutional right in France instead.

Why did Marine Le Pen finally join the initiative, saying publicly a few days ago that she was in favor of the move? Her own explanation was that she hoped to amend the text in order to “freeze” the dispositions of the current abortion laws, specifically the 14-week limit. But more pragmatically, she thus showed her submission to the French political taboo on abortion: opposing abortion is the surest way not to rise to power at a national level. Besides, her own parliamentary group includes homosexuals, some of whom favor “same-sex marriage,” traditional Catholics, and people who follow the mainstream where societal issues are involved.

According to Nicolas Bauer, associate researcher at the European Centre for Law and Justice, members of both Le Pen’s party and Les Republicains voted for the text because it rejected an “unconditional right” to abortion. He claimed that as it stands, it does not appear to be incompatible with the right to conscientious objection for doctors or with the 14-week limit.

But in truth, this amounts to laying down arms in the fight against legal killing of unborn children. In no way does it make the existing situation less bad, which is the moral condition for voting for a text that allows abortion, and then only provided that the voter’s personal full opposition to abortion is known and manifest. Under present conditions, some 223,300 legal abortions were registered in France in 2021. Before COVID, the figure was even higher, with 233,000 abortions registered in 2019.

Would the constitutional change prevent abortion from becoming even more easy to obtain? Bauer thinks not:

That said, if such a constitutional change is adopted, feminist associations will be able to challenge all these limitations on abortion before the Constitutional Council. The latter would then verify that they do not undermine ‘the effectiveness and equal access to the right to abortion.’ For example, these associations already accuse conscientious objection of making access to abortion unequal according to territory and of greatly increasing waiting times.

In any case, protecting abortion under France’s constitution could only have the effect of making the deliberate killing of an unborn child at its own mother’s request seem “normal” and “ordinary,” to “trivialize” it, in a word.

May God preserve France from such an open and complete rebellion against natural and divine law. The fight is on.