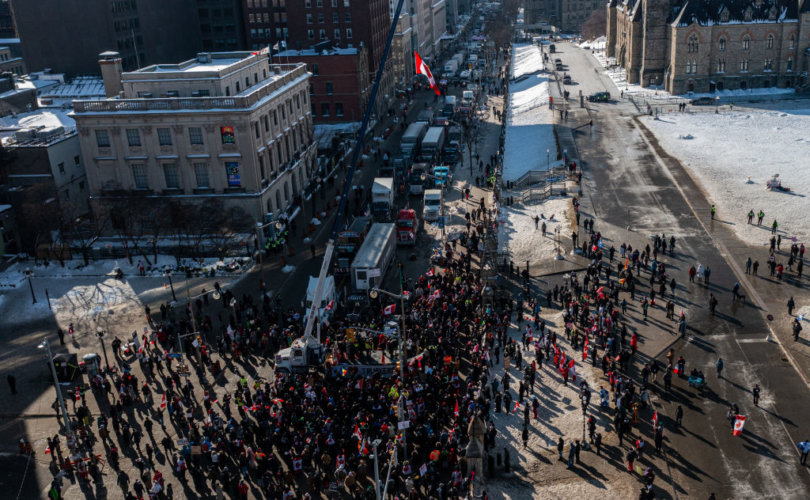 Canadians at the head of the Freedom Convoy, January 31, 2022 in Ottawa, Canada. Alex Kent/Getty Images

OTTAWA, Ontario (JCCF) – The Justice Centre has challenged Ottawa Mayor Jim Watson over his accusation that peacefully protesting truckers are “a danger of major proportions that could result in serious harm to persons or substantial damage to property.”

Mayor Watson (pictured below) has not divulged publicly what facts he might rely on to justify his assessment of truckers as posing “a danger of major proportions,” in light of their law-abiding behaviour since arriving in Ottawa more than one week ago.

The definition of “emergency” under the Emergency Management and Civil Protection Act is “a situation or an impending situation that constitutes a danger of major proportions that could result in serious harm to persons or substantial damage to property and that is caused by the forces of nature, a disease or other health risk, an accident or an act whether intentional or otherwise.”

“This is a truly disturbing overreach and misuse of emergency powers,” stated lawyer Nicholas Wansbutter.

According to affidavit evidence filed in the Ontario Superior Court of Justice, the Freedom Convoy has been working closely with the Ottawa Police Service, the RCMP, and the Parliamentary Protective Service.

It was one of the Freedom Convoy truckers who reported to police a property damage offence and an assault, committed by individuals not affiliated with the truckers. Convoy leaders have asked all truckers to refrain from honking their horns between 8:00 p.m. and 8:00 a.m.

One of the witnesses in the court action has stated under oath that truckers and their supporters “are feeding the homeless on Wellington Street and filling their backpacks with food.”

“Truckers have taken a whole trailer full of food to the homeless shelter. Truckers are maintaining the cleanliness of city streets, including picking up discarded masks on the ground, centralized garbage collection, shoveling snow at the War Memorial and the Terry Fox statue, and decorating and providing security for the War Memorial and Terry Fox statue,” the witness said.

Another witness, an Ottawa resident, swore that “the truckers I have interacted with have, at all times, been friendly, courteous, humble, considerate and peaceful. I have not observed any aggressive or inappropriate behaviours.”

He said the truckers were diverse, including Sikhs, Blacks, Aboriginals and others. He “observed truckers decorating the tomb of the unknown soldier with flowers and guarding it” and had “not seen any violent or threatening behaviour.”

He further noted that “the truckers do not honk their horns at night. My everyday life has not been disrupted by any noise related to the Freedom Convoy during the day.” He asserted: “My ability to park and to travel in downtown Ottawa, or to and from Parliament Hill has not been impeded by the presence of the truckers.”

Another Ottawa resident, who works for Statistics Canada, described reality on the ground as follows:

“The protesters were peaceful and respectful, I saw no violence or harassment. I was not impeded in any way, and could walk about freely and safely. I did not see any hateful symbols, in fact, I saw an abundance of Canada flags and Quebec flags as well as countless signs calling for freedom and the end of COVID related mandates.

I did see some anti-Trudeau flags using harsh language. However, I would describe the scene as a peaceful, pro-freedom demonstration. My everyday life has not been disrupted by any noise related to the downtown demonstrations.”

“There is no factual basis to support the Mayor’s declaration of an emergency,” concluded Wansbutter.