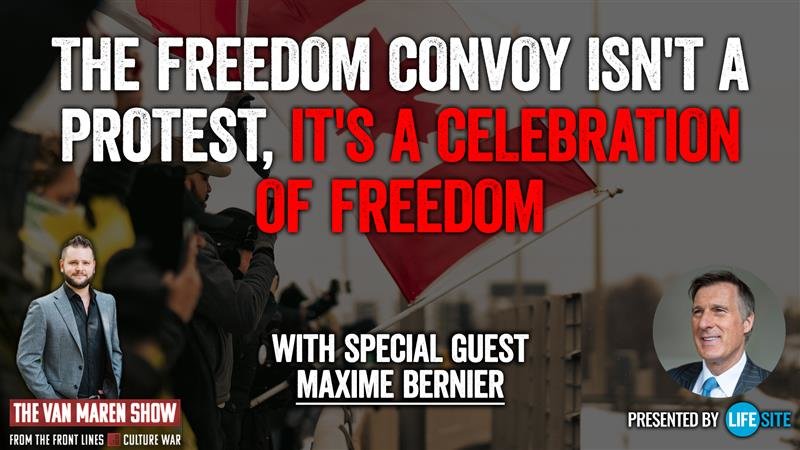 (LifeSiteNews) — Jonathon’s special guest on this week’s episode of The Van Maren Show is Maxime Bernier.

The leader of the People’s Party of Canada and former Conservative MP kicked off the show by describing his experience with the “historic” Freedom Convoy. He says people of all ages and walks of life came to Ottawa in support of the truckers.

“I thought I was going to a protest, but I was wrong,” he said. “It was not a protest, it was a rally. It was a kind of celebration of our freedoms. People from all ages, young people, older people, families …”

Bernier shared his thoughts on the trucker vaccine mandate and Justin Trudeau’s reaction to the convoy. In case you missed it, Trudeau said he supported people’s freedom of assembly but bizarrely denounced the “Nazi symbolism” and “racist imagery” he claimed was present at the rally. He added that he would stay away from the rally due to the truckers’ alleged “hateful rhetoric” and “violence toward citizens.”

“I believe that what Justin Trudeau did with that new rule for truckers, that was enough for the population because these truckers were essential workers during the pandemic, in the beginning of that pandemic,” Bernier said. “I’m sorry, but actually knowing that they’re most of the time alone in their trucks, so they are not a danger for the population.”

Jonathon and Maxime also dive into discussions on the Conservatives, Erin O’Toole, the Canadian political landscape, and plenty more. Listen to this week’s episode below: