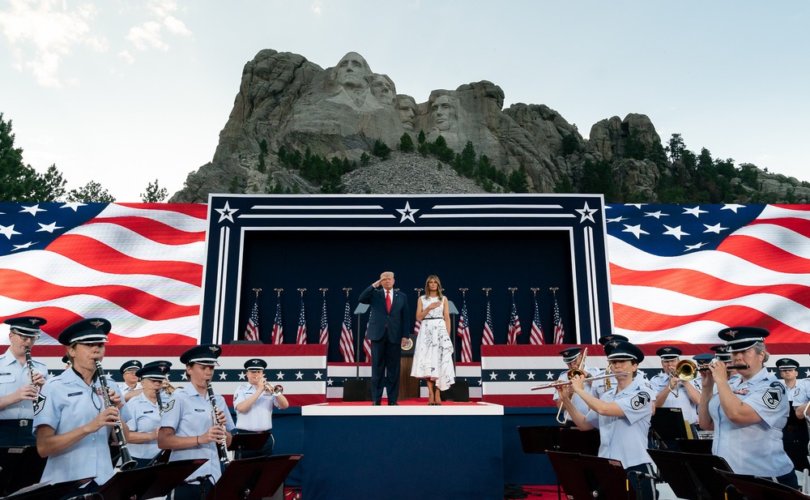 January 11, 2021 (LifeSiteNews) – Despite the fact that President Donald Trump has only 10 days left in office, the left is trying to impeach him yet again, saying that by urging protestors to “peacefully” march to the U.S. Capitol Trump “incited” an “insurrection.” There is also a coordinated effort banning him from almost all social media, showing that perhaps the leader of the free world isn’t necessarily the most powerful person in the world. Why is there such an effort to “unperson” him, to borrow a term from George Orwell’s prophetic 1984?

LifeSiteNews has reported on all aspects of Trump’s presidency as related to life, family, and culture issues. Despite Trump’s support of same-sex “marriage,” which we have never tried to sugarcoat or gloss over, he has nevertheless been a stalwart defender of unborn children, a thorn in Planned Parenthood’s side, and he has strongly defended religious liberty. Here we present a list of his accomplishments for the pro-life and pro-family movement as well as America in general. Much of this list is compiled using information from the Family Research Council, the Susan B. Anthony List, the Trump administration itself, and previous LifeSite coverage.

In addition to the below accomplishments, Trump also kept the U.S. out of new wars; brokered historic peace deals in the Middle East; oversaw record economic growth and employment numbers; axed the Obamacare individual mandate which forced people to buy expensive, low-quality, and often pro-abortion health plans; and signed the biggest package of tax cuts and reforms in history. Under Trump, the FDA approved more affordable generic drugs than ever before in history and many drug companies froze or reversed planned price increases.

— Article continues below Petition —
President Trump: Please pardon all involved in the case of Lisa Miller
Show Petition Text
6136 have signed the petition.
Let's get to 7500!
Thank you for signing this petition!
Add your signature:
Show Petition Text

Also notable is the fact that Trump withdrew the U.S. from the Paris Climate Accord and the U.S.-Iran Deal, both of which were pushed by far-left radicals. The pro-abortion Paris Climate Accord includes language “designed to promote abortion and contraception,” as Voice of the Family put it. It is also premised on dubious “climate change” science and undermines national sovereignty.

Joe Biden has said he will rejoin the Paris Climate Accord and has promised to implement the left’s long wish-list, which includes laws (particularly the so-called Equality Act) and/or executive orders protecting abortion on demand, transgenderism in civil rights law, and forcing Americans to violate their consciences as related to abortion, contraception, same-sex “marriage,” and transgender confusion.

Additionally, Trump has made numerous strong statements about national sovereignty and the role of Christianity in the public square. These include his pro-God Poland speech and Christmas messages about the birth of Jesus which have gone viral.

He has also pushed back against political correctness and the divisive, anti-human “critical race theory” that undergirds it. And during the coronavirus crisis as leftist governors tried to ban people from going to church (among other normal and necessary activities) while keeping marijuana shops and abortion centers open, Trump spoke out in favor of religious freedom, calling places of worship “essential.”

As the world focuses on the deletion of Trump’s accounts from the most prominent social media sites, LifeSite presents these lists so that Trump’s pro-life, pro-family accomplishments are not forgotten. They are long lists, but worth reading all the way through.

The above-mentioned Office for Civil Rights (OCR) at the U.S. Department of Health and Human Services has taken many actions to protect the rights of vulnerable people, particularly those with disabilities. It is this office that was part of the Trump administration’s efforts to get California and Vermont to comply with laws protecting conscience rights in healthcare, and its intervention to ensure people hospitalized with the coronavirus had access to a priest and the Last Rites.

Below is a list from OCR of its many accomplishments in the area of protecting and helping Americans with disabilities. Many of these also intersect with bioethics, like the rationing of healthcare. OCR compiled this list in honor of the 30th anniversary of the Americans With Disabilities Act (ADA).

Empowering Americans with Disabilities to Live in the Community

Detailed list of accomplishments related to pro-life issues, religious liberty, and the family

The Family Research Council Action published this list of Trump’s accomplishments by year on issues social conservatives care about. It was last updated September 3, 2020. A PDF of this excellent FRC resource is available here.

And just today, the Trump administration proposed another rule to make it harder to experiment on aborted babies.

UPDATED: 68 more reasons to be grateful for President Trump