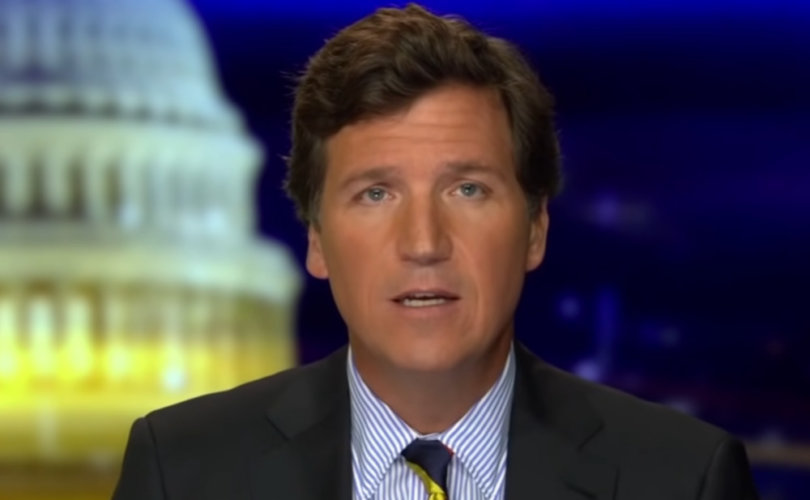 January 5, 2021 (LifeSiteNews) – America is on the verge of becoming a nation of “one-party rule,” Fox News commentator Tucker Carlson warned Monday night in a blistering monologue (video, transcript) about last fall’s presidential election, this week’s Senate runoff election, and what “the people in charge of this country” would rather Americans focus on.

“A year ago at this time, the biggest story in the world was getting almost no attention in our country,” Carlson began, referring to the COVID-19 virus’ initial outbreak in China. “For a variety of reasons, the people in charge of this country didn't want to talk about it. So instead, they told us that the biggest thing happening on Jan. 4, 2020 was the impeachment of Donald Trump” over a now-infamous phone call with the president of Ukraine.

“Fast-forward a year later and the people in charge are saying pretty much the same thing: Donald Trump must be impeached over a phone call,” he continued, this time a call in which Trump demanded that Georgia Secretary of State Brad Raffensperger do more to investigate election fraud in the November presidential election.

“We're willing to bet that you won't decide Donald Trump's latest phone call is the single most important thing happening in the world right now, yet CNN is claiming that it is. Why are they doing that?” Carlson asked. “Here's one guess: On Tuesday, there are two U.S. Senate elections in Georgia, and the outcome of those races will determine who controls the entire U.S. government. If the Democrats win both races — and at this point, that is entirely possible, even likely — the Democratic Party will run everything in Washington and they will be able to do whatever they want.”

Voting is currently underway in the Peach State on Republican Sens. David Perdue and Kelly Loeffler’s races against Democrat challengers Jon Ossoff and Raphael Warnock. With the House of Representatives remaining in Democrat hands and Democrat Joe Biden slated to become President on January 20, these two races will decide the razor-thin margin for control of the Senate, which will in turn decide whether the Biden administration is able to enact its most transformative agenda items, such as packing the Supreme Court or passing the so-called LGBT “Equality Act.”

Carlson went on to discuss how “virtually every power center on earth joined the cause” of electing Biden, especially the American news media and the world’s top internet giants, from manipulating the flow of information to suppressing damaging news stories, such as police body-cam video of Warnock’s ex-wife accusing him of running over her foot during a domestic dispute.

“Google changed its famed algorithm to obliterate traffic to websites that criticized Joe Biden,” he said. “Facebook and Twitter did essentially the same thing. If that's not rigging an election, there's no meaning to that phrase. The people who control the flow of virtually all information in English became unpaid consultants to the Biden campaign.”

“Apart from Fox News, pretty much every major media outlet in the United States is beholden to Silicon Valley,” Carlson continued. “Referrals from search engines and social media sites generate revenue that news organizations need to survive. So if you mess with Big Tech, you die. Those are the new rules, and they are unsustainable. You can't have a democracy in a system like that because people can't get the information they need to make informed decisions. You bypass the First Amendment.”

Further, if Ossoff and Warnock win Tuesday, “there will be no way to stop it. In fact, it will accelerate because it benefits a specific political party.”

“You'll have plenty of time to think about what happened on Tuesday come Wednesday morning when Democrats are in charge and there's nothing you can do about it, now or ever,” Carlson warned. “On Monday, House Speaker Nancy Pelosi, D-Calif., came out in favor of D.C. statehood. That's plainly unconstitutional, but that's not the point. The point is two more Democrats in the United States Senate, probably four if you include Puerto Rico. That's a permanent new majority. That means you have what's called a one-party state, and that means the game is over. That's coming at high speed. Just be sure not to think about it.”