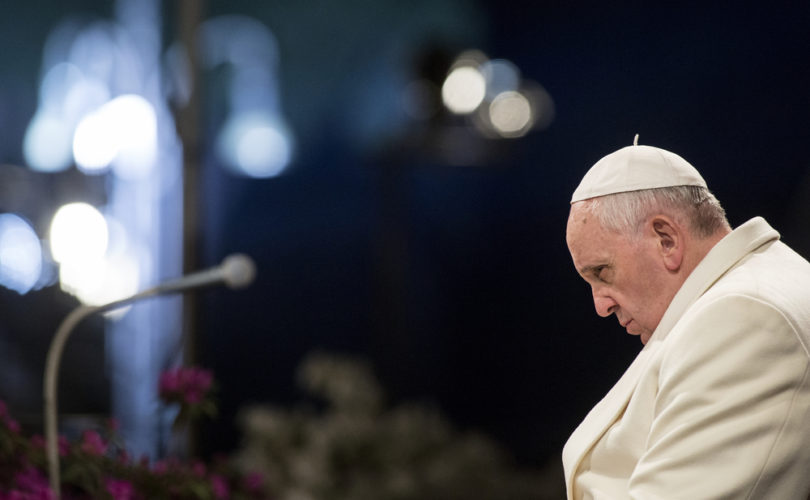 March 24, 2016 (LifeSiteNews) – It sometimes seems that in attempting to understand Pope Francis, fluency in German is more helpful than Italian or even Spanish.  The pope speaks German well and is surrounded by Germans, from Pope Emeritus Benedict XVI, to his joint secretary Archbishop Georg Ganswein, to Cardinal Reinhard Marx, the head of the German Bishops Conference and member of the Pope’s Council of 9 Cardinals, Cardinal Gerhard Muller, who heads the powerful Congregation for the Doctrine of Faith, and finally the controversial Cardinal Walter Kasper, a close collaborator and theologian upon whom the Holy Father relies.

In listening to the accounts these men give about Francis one feels almost as if the Pope has a split personality.  Kasper and Marx see him as launching a liberal revolution in the Church, while Ganswein and Muller paint him as being in line with Tradition and his predecessors. Liberals like Kasper also claim Francis is in line with Church Tradition, but interpret the Tradition according to their own revolutionary notions that open the door on a panoply of progressive issues like divorce, a married priesthood, sexuality, conscience, and the role of women.

Because of the influence of Germans on Francis’ papacy, their views of him provide one crucial key in figuring out how to interpret him.

From Pope Emeritus Benedict himself little can be expected in the way of open communication that would criticize his successor.  We have, however, heard a few notes of concern from him, along with selective praise.

Two years ago we learned that Pope Emeritus Benedict had penned a 4-page critique of Pope Francis’ interview with the Jesuit America magazine where Francis famously said, “We cannot insist only on issues related to abortion, gay marriage and the use of contraceptive methods.”

The most recent interview with the Pope Emeritus, released days ago, contained praise for Pope Francis’ emphasis on the mercy of God. “Pope Francis is totally in accord with this line: his pastoral practice expresses itself precisely through the fact that he continually speaks to us of God’s mercy,” said Pope Benedict. “It is mercy that moves us towards God, while justice frightens us before him.”

Right in the middle of the divorce/remarried communion dispute, the Pope Emeritus re-released an essay which he had first penned in 1972. Back then, Fr. Joseph Ratzinger (later Pope Benedict) accepted the proposal to allow for communion for remarried divorcees under certain circumstances.  In the newly released version, those paragraphs were intentionally removed by Benedict.

And finally, for those watching extremely closely, in the weeks following the confirmed leaks about the coming ousting of Cardinal Raymond Burke from his post as Prefect of the Apostolic Signatura, but before Pope Francis had formally removed Burke, a letter by Pope Benedict surfaced indicating that he considered Cardinal Burke among the “great Cardinals” of the Church.

To determine what Benedict thinks of Francis outside the confines of his public position, Vatican watchers have looked to friends who have met with the Pope Emeritus in his private quarters at the Vatican and also to Archbishop Ganswein, who remains secretary to Benedict while also working daily with Pope Francis as the head of the Papal Household.

Given Ganswein’s very sensitive public role, it is highly unlikely that he would give any candid comments about Benedict’s view of Francis. However, it was from Ganswein that we learned of the 4-page critique.  His talking points about Benedict’s take on Francis have consistently indicated that he sees a continuity between the two.  The most recent of those was released in a March 19 interview with Germany’s Deutsche Welle TV program.  In those statements of continuity, however, come rather stark statements which may seem to some to be an attempt to restrain the actions of Pope Francis.

For instance, in the March 19 interview, Archbishop Ganswein suggests that Pope Francis will not make a change to allow for a non-celibate priesthood, even though there are many indications in Vatican circles that Pope Francis is indeed considering such a move.  Ganswein says in the interview that Pope Francis sees in celibacy “not an obstacle – it is a challenge, but also a source of strength,” adding “I do not believe that under Pope Francis, there will now be a change in this question … of celibacy” (translation by Maike Hickson at 1Peter5).

When asked about communion for remarried divorcees, Ganswein says of Pope Francis: “I am convinced that he will continue on the path of his predecessors – that is to say, also according to the Church’s Magisterium – and that there will also be found, accordingly, such statements in his own magisterial writing.”

Ganswein spoke similarly in an interview last summer where he criticized the confusion coming from the Synod on the Family. He said communion for remarried divorcees is “impossible” and that the teaching of the Church condemning homosexual acts is irreformable.

From some of Benedict’s close German associates, however, have come some very critical remarks about Pope Francis.

Last year in an interview in the German Catholic journal Herder Korrespondenz, Pope Benedict’s decades-long friend and colleague Professor Robert Spaemann accused Pope Francis of fostering an unhelpful “cult of spontaneity” and of inciting “the impression of chaos.” While Spaemann praised Francis for his “traditional piety,” he called Pope Francis’ handling of the Synod “irritating” and was also critical of Francis’ dismissal of personnel close to Pope Benedict. He said:

Pope Francis always stresses his close bond with Pope Benedict. In certain ways that certainly also exists. But I wonder why he throws so many people out of the Vatican who had been called in by Benedict.

In January came a similar critique of Francis from a German prelate who has known Pope Benedict for years and had many private meetings with him. The Dean of Priests in the Diocese of Regensburg, Fr. Heinrich Wachter, is also a personal friend of Pope Benedict’s brother Fr. Georg Ratzinger.

Asked by the Bavarian weekly Wochenblatt, about the greatest difference between Popes Benedict and Francis, Fr. Wachter replied:

There are powerful differences. In a general way one can say: Francis acts differently in each aspect. This is certainly not his intention – one does not have to interpret it against him – but in many things, the way he acts stultifies his predecessor. With regard to certain ways of conduct, he fundamentally positions himself differently from our Benedict. But, compared to him, Francis is not at all informed theologically. He talks unbelievably much, but barely makes a clear statement. Even Cardinal [Joachim] Meisner said about him that his statements are always very problematic. (translation by Maike Hickson at 1Peter5)

Cardinal Muller was asked some tough questions about the differences between Pope Francis and Pope Benedict in a March 1 interview.  The CDF prefect stressed Francis’ continuity with the traditional faith saying, “Again and again, he [the pope] refers to the teaching of the Church as the framework of interpretation, also in his spontaneous remarks in interviews.” Muller added that Francis has “a highly spiritual and theological power of judgment which follows the spirituality of the founder of his own [Jesuit] order, St. Ignatius of Loyola.”

Nevertheless, Muller admitted that he has had to correct the Pope theologically. “Pope Francis is not a 'professional theologian', but has been largely formed by his experiences in the field of the pastoral care, which is very different here with us [in the West],” he said. He characterized Francis’ reaction to his corrections this way: “That is what he [Pope Francis] has said already three or four times himself, publicly (laughs); and then he gave me a hug so that – as he said – the gossip ceases with regard to this matter.”

Pope Francis in the eyes of liberal German prelates

The German liberal prelates surrounding Pope Francis see the same tendencies in him as his critics.  But rather than cause for concern, they see them as cause for celebration.

Cardinal Kasper has made an art form of ambiguity and hinted that that was the way forward from a seeming impasse at the Synod on the Family over contentious questions.

Kasper gave a recent talk where he said Pope Francis would in the upcoming apostolic exhortation mark the “the first step in a reform” that will be the “turning of a page” of Church history “after 1,700 years.”  The 82-year-old Cardinal, who has received high praise from Pope Francis, is credited with the controversial proposal of admitting remarried divorcees to communion, a position which he has often claimed Francis supports.  Kasper supports a downplaying of the Church’s teaching on moral issues such as abortion, contraception and homosexuality and sees the Pope as supportive of such proposals.

As for Cardinal Marx, his emphasis has been pushing for authority to be granted to bishops conferences.  Previous to the second Synod on the Family, Marx made his then highly controversial remarks speaking of the German Bishops Conference: “We are not a subsidiary of Rome.”  He was speaking of going ahead with communion for remarried divorcees prior to any conclusion on the matter from the Synod.  After the second synod however, his remarks seemed not revolutionary at all, but only a reflection of Pope Francis’ own thoughts.

During the second Synod on the Family, Pope Francis invited the Cardinals to a commemoration of the 50th anniversary of the establishment the modern Synod of Bishops.  There he announced the need for a “decentralization” of the Catholic Church. While that may have shocked some at the time, Pope Francis had already hinted at such a proposal in his first apostolic exhortation Evangelii Gaudium (The Gospel of Joy) released in November 2013.  In it he called for a “conversion of the papacy” and stated that “a juridical status of episcopal conferences which would see them as subjects of specific attributions, including genuine doctrinal authority, has not yet been sufficiently elaborated.”

One thing rings true from Pope Francis’ critics within the hierarchy and among those close to Pope Benedict. They all share a love and concern not only for the papacy, but also for Pope Francis himself.  They have expressed, some of them publicly, their vehement disagreements with Pope Francis’ actions, to be sure. But they have done so out of genuine love and concern for the Church and for the Pope himself.  It is a kind of loving criticism the Pope has welcomed in the past.