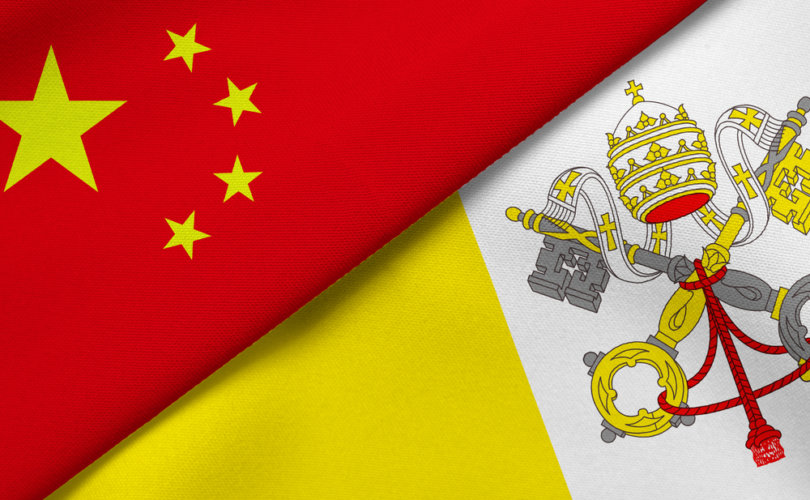 (LifeSiteNews) – Against the backdrop of the 2022 Winter Olympic Games, which has seen athletes complaining of abject conditions and images that show the heavily industrialized Beijing juxtaposed against synthetic snowscapes, the world watches an influential leader publicly support dreams of global human fraternity and the flourishing of mankind, all the while ruling those under his control with an iron fist and punishing minorities which fall foul of his worldview.

I am, of course, speaking of the earthly head of the Catholic Church, Pope Francis, who has thrown his full support behind the Sino-sponsored games as a “unique experience of human fraternity and peace.” Or could I be referencing communist dictator Xi Jinping, head of the murderous Chinese Communist Party, who said of the games: “We need to follow the trend of the times, stay true to humanity’s common values of peace, development, equity, justice, democracy and freedom, promote exchanges and mutual learning between civilizations, and work together to build a community with a shared future for mankind”?

One would be forgiven for thinking either way; the differences between the two have become increasingly difficult to find.

Indeed, the two men consistently hit the same talking points regarding international relations, championing globalization and the tearing down of borders, uniting the world’s governments under socialist public policies, and pushing hard on implementing the World Economic Forum’s (WEF) proposals regarding the so-called climate crisis, with its attendant tenets of the sexual revolution.

Take, for example, the 2020 encyclical of Pope Francis, Fratelli Tutti, a work so littered with globalist newspeak that one could mistake its contents for a secular address to the United Nations General Assembly.

In fact, so close in kind are sections of Francis’ supposedly Christian exhortation of brotherhood in Fratelli Tutti to the aims of globalism that Vatican journalist Edward Pentin pointed out the stark similarities between the document (and papal statements from elsewhere) and a January speech Jinping delivered to The Davos Agenda, a worldwide conference on the global response to COVID-19.

Criticizing distinctions between nations and cultures, the Pontiff wrote that “[n]ew walls are erected for self-preservation, the outside world ceases to exist and leaves only ‘my’ world, to the point that others, no longer considered human beings possessed of an inalienable dignity, become only ‘them.’”

He later underscored an apparent “temptation to build a culture of walls, to raise walls, walls in the heart, walls on the land, in order to prevent this encounter with other cultures, with other people. And those who raise walls will end up as slaves within the very walls they have built. They are left without horizons, for they lack this interchange with others.”

Contrast this with Jinping’s criticism of sovereign boundaries, both physical and ideological, and you will discover that both men appear to have been reading from the same playbook.

“Acts of single-mindedly building ‘exclusive yards with high walls’ or ‘parallel systems,’ of enthusiastically putting together exclusive small circles or blocs that polarize the world, of overstretching the concept of national security to hold back economic and technological advances of other countries, and of fanning ideological antagonism and politicizing or weaponizing economic, scientific, and technological issues, will gravely undercut international efforts to tackle common challenges,” Jinping told attendees at the WEF conference.

Furthermore, the global leaders have made similarly positive remarks concerning the United Nation’s (UN) 2030 Agenda, the organization’s “sustainable development” plan. Jinping boasted in his January statement that he has “put forward a Global Development Initiative at the UN General Assembly to draw international attention to the pressing challenges faced by developing countries. The Initiative is a public good open to the whole world, which aims to form synergy with the 2030 Agenda for Sustainable Development and boost common development across the world.”

Stressing a “people-centered philosophy of development, place development, and livelihoods,” Jinping implored the WEF to put Agenda 2030 “front and center in global macro-policies.”

Meanwhile, Francis gave his express support for the “Sustainable Development Goals” of the UN in 2019, which among other things promotes “universal access to sexual and reproductive health and reproductive rights” – code words for contraception and legal abortion, and which rely on the climate agenda in order to attain the redistribution of world property.

The Pope claimed that the approval of the goals by some 190 countries, including Jinping’s China, has been “a great step forward for global dialogue, marking a vitally new and universal solidarity.”

“Different religious traditions, including the Catholic tradition, have embraced the objectives of sustainable development because they are the result of global participatory processes that, on the one hand, reflect the values of people and, on the other, are sustained by an integral vision of development,” he said.

“We are all members of the one human family,” Francis told the WEF in January 2020. “The moral obligation to care for one another flows from this fact, as does the correlative principle of placing the human person, rather than the mere pursuit of power or profit, at the very centre of public policy,” he said, as though pre-empting Jinping’s address.

One might expect communist China to espouse such ideas and appear hell-bent on reordering civilization under the designs of a one-world government, but that the leader of Christ’s Church should echo and promote the same ideas from within a body which has resolutely rejected the tenets of communism as “a wicked confederacy” which seeks the “overthrow of all civil society” should come as a shock.

But it does not.

Pope Francis has consistently shown himself to back China on such matters, going as far as to support the same Chinese authorities that usurped Catholic Church governance in the country in the 1940s when it established the Chinese Patriotic Catholic Association (CPCA), the official state-recognized “church.”

In 2018 Pope Francis signed the controversial Sino-Vatican accord, believed to have been brokered in part by the disgraced former cardinal Theodore McCarrick. Although many of the details of the agreement have been kept under lock and key, Francis ceded control over appointing bishops in China to the CCP and CPCA, while Beijing reportedly accepted Francis as the head of the Catholic Church.

As noted by Catholic Culture founder Phil Lawler, during a March 2020 video message the Pope said that the Catholic Church “wants Chinese Christians to be truly Christians, and to be good citizens,” adding that “they need to achieve the unity of the divided Catholic community” while failing to provide crucial context about the Chinese regime; to wit, that a “good citizen” is one who gives priority and obeisance to the ruling CCP and, indeed, puppet church.