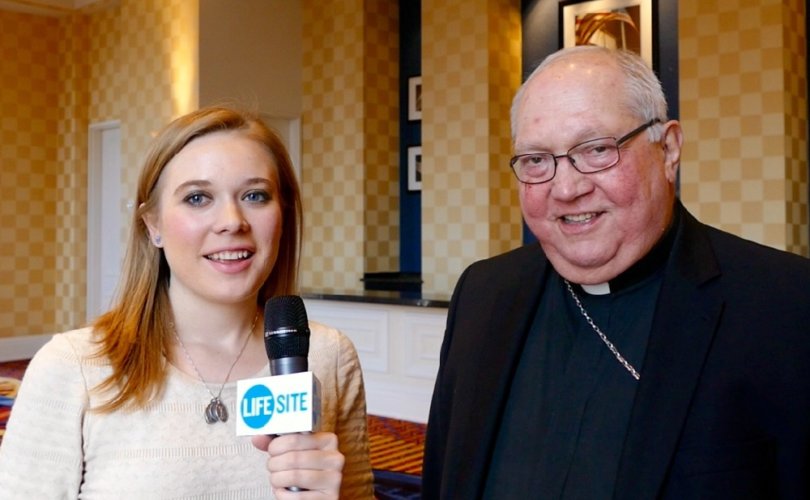 In 2016, Morlino became the second U.S. bishop to officially adopt the ad orientem posture facing the altar with the people while offering Mass at his regular cathedral parish. He said his flock received this well because he made catechesis on the liturgy a focus of his episcopate.

“The particular community that worships with me have been made aware and catechized about the meaning of ad orientem for years now,” he said. “When I announced to them that I would begin to celebrate in the ad orientem in the Ordinary Form, they smiled and nodded yes.”

Offering Mass this way “enhances beauty, it enhances reverence, and it enhances that feeling of comfort, that predictability that somehow the priest is much less likely to share off-the-cuff when he’s celebrating ad orientem,” said Morlino.

Before the promulgation of the Novus Ordo Mass by Pope Paul VI, Masses were offered with the priest facing the tabernacle along with his congregation. The rubrics of the post-Vatican II Mass suggest that liturgy should still be offered ad orientem, a fact often ignored by liturgical innovators and left-wing clerics.

Morlino, who the Catholic blogosphere fondly nicknamed the “Extraordinary Ordinary” because he offered Mass in the Extraordinary Form and allowed it to flourish in his diocese, explained to LifeSiteNews that “predictability” in the liturgy allows people to worship without worrying and wondering about what will happen next.

“St. Ignatius said repetition is the mother of studies, and we know from the Church fathers and many others that repetition is a key to prayer,” said Morlino. “So there must be a certain predictability in the liturgy so people can relax and not wonder, ‘what’s going to happen next and how exactly am I gonna respond to it?’ That approach is I think what’s harmed the Church so much — particularly maybe in the United States since the [Second Vatican] Council – that the participation in the Eucharist became unpredictable.”

Morlino’s diocese experienced a surge in vocations to the priesthood while many dioceses in the West have struggled to recruit men to become priests. Morlino said he thanks God every day for the seminarians of his diocese, who are “tremendous,” “wonderful,” and “terrific.”

“Seminarians in liturgy want really a couple things,” he said. “The most important thing is they want reverence… generally, the young men who are coming forth to be seminarians want reverence, they want beauty, and they want to relax so that they can participate. They want to know what’s going to happen next” rather than having to wonder what liturgical innovations will be introduced.

‘You have shepherded your flock well’

Bishop Morlino was well-known for his defense of orthodoxy and the pro-life and pro-family causes, in addition to his reverent Masses and focus on sacred liturgy.

On Monday, Dan Miller of Pro-Life Wisconsin wrote that Morlino made an enormous difference for the state’s pro-life movement and inspired his flock by joining them at prayer vigils outside abortion centers:

Pro-Life Wisconsin is so blessed to be a part of your community. Bishop Morlino, what you have done here is beyond a mere mortal’s words. Your leadership has inspired people to make great sacrifices to end abortion. You have shepherded your flock well. Look at the time your sheep have given! Thousands of cumulative hours spent out in front of Planned Parenthood making a difference. Your prayers. It wouldn’t surprise me if there were more than a million rosaries prayed throughout the years in front of Planned Parenthood to end abortion. Your finances. Millions of dollars you have sacrificed so that our brothers and sisters in Christ may have a better chance of making it out of the womb ALIVE! If the life of the pro-life movement is any indicator of a faithful Bishop, you are absolutely guilty of leading your flock well! Thank you! You are a sign that the hope of Christ is alive and well. Let us rejoice and be glad for your steadfast love for Christ, your vocation and for the people you serve and have served so well.

“The death of Bp. Morlino of Madison has had the effect of demonstrating that he truly deserved the nickname [the] Extraordinary Ordinary,” Father John Zuhlsdorf wrote on his well-trafficked blog. “I have received a flood of emails and text messages from all over the world expressing sorrow at his passing, admiration for his work and for his sheer goodness, and hope with prayers for him and for the continuation of what he set in motion.”

Zuhlsdorf shared a few of those messages, some of which were from priests telling him they would be offering Masses for the repose of the bishop’s soul.

“Bishop Morlino did more than encourage speaking truth to power[;] he modeled it,” Madison priest Father Richard Heilman wrote of his late ordinary. “His Sunday homilies were, classically, a refutation of what was on the news that previous week. He was not going to let them get away with manipulating his flock. He was shockingly to the point. But, while clear and unambiguous in his teachings, he remained charitable in his approach. He spoke these words whenever he could, ‘Truth with love.’”

“Bishop knew that a strong force of believers would not come from a soft Catholicism,” Heilman continued. “Moreover, Bishop understood that a strong Catholicism cannot emerge from a weak liturgy. Bishop was an avid disciple of Pope Benedict XVI, and he agreed with the holy pope who wrote about what laid at the very heart of the crisis in our Church: ‘I am convinced that the crisis in the Church that we are experiencing today is, to a large extent, due to the disintegration of the liturgy.’”

US Catholics pay heartfelt tribute to the late Bishop Morlino