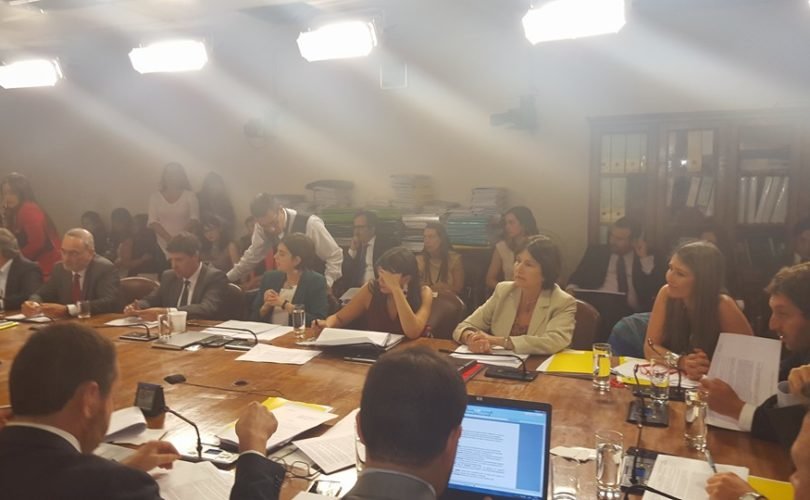 Inside the deliberations of the Chilean commission on the constitution as they debated the legalization of abortion.

March 3, 2016 (LifeSiteNews) – On Tuesday, leftist party politicians in Chile were able to clear one more hurdle in the process to legalize abortion in the most conservative and pro-life South American nation.  The vote was passed in the Constitution commission by an 8 to 5 majority forged by a coalition of socialists, communists and other far-left politicians.

The process now moves on to the lower chamber's commission on finance after which it will be referred to the Chilean Senate, in which pro-lifers hope to put up a very tough fight.

LifeSiteNews spoke with Marcela Aranda who has been actively educating and lobbying on the ground in the Chilean capital.

“There is an agreement among the leftist majority to finalize the process today.  Yesterday's votes were conducted with a complete lack of transparency or respect for the usual legislative process,” stated Ms. Aranda, adding that “all of the directives came directly from the executive branch and were provided only one hour prior to the vote – effectively preventing the legislators from being able to analyze the text before the vote.  Neither the members of pro-life civil society groups nor the advisors to the legislators had a chance to read the text of the law thoroughly before the vote.”

The president of Chile is the socialist Michelle Bachelet, who has a long track record of assaults upon the right to life, in national as well as in international forums.  The legalization of abortion, which has been one of her defining political projects was stalled when President Bachelet became mired in a scandal along with her son who was discovered to have been involved in peddling his mother's influence for financial gain.

Ms. Aranda noted that some very important gains had been achieved in prior negotiations in the Commission on Health. The gains were simply erased, however, when the executive ordered the legislators to ignore the compromise and force the original language proposed by President Bachelet.

The Chilean law would legalize abortion in three cases: cases of children conceived in rape, children suffering from disabilities, and in the case where the life of the mother is in danger.

A point of contention among a majority of the legislators has been the wording of the rape exception, with the socialists and communists insisting that there be no requirement of proof of rape before committing an abortion.  Human rights activists like Ms. Aranda have indicated that this will effectively legalize abortion on demand, so long as the person seeking an abortion merely alleges a rape.

On this point, the Chilean Conference of Bishops issued a strong statement last week which made clear that “to legalize abortion in cases of rape is to renounce the protection of the most defenseless, and is an act of surrender of the state in light of the acts of aggression against women.”

Chile also has a socialized medical system, although wealthy Chileans often opt out of the state system and seek higher quality private medical care.  Under the proposed law, abortion would be covered by the badly managed and unsafe government medical system.

Members of the president's party are hoping to finalize the approval of the abortion law before the president's state of the union address on May 21.  It is also widely believed that if pro-lifers can draw out the process until the summer and fall, it will become a political issue in lieu of the local mayoral elections that will be held on June 5.