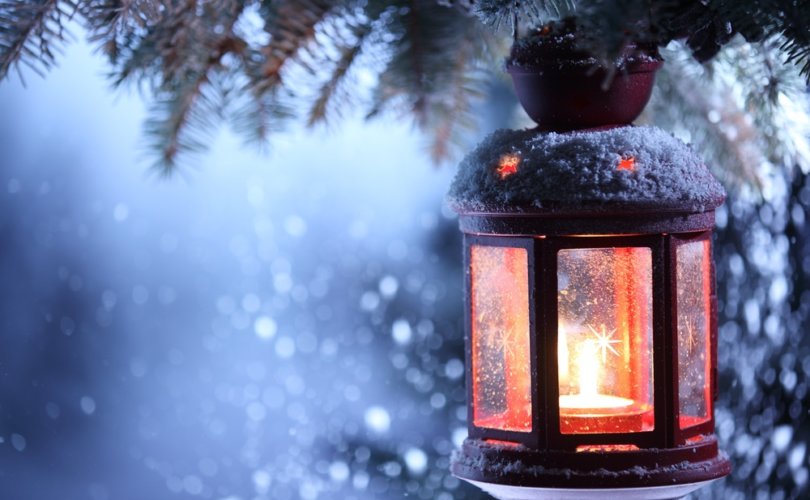 December 24, 2019 (LifeSiteNews) – During Christmas, my little family has always had a special affection for the song “O Holy Night” as sung by Perry Como. Some of its words are so touching and also remind us so much of today:

“Long lay the world in sin and error pining, 'til He appeared and the soul felt its worth. A thrill of hope, the weary world rejoices for yonder breaks a new and glorious morn. Fall on your knees, o hear the Angel voices!….”

This song captures so well this moment of Christ's light coming into our dark world, His Grace coming into a world of sin.

Yes, every time we listen to this song, we feel as if we have to fall onto our knees (and sometimes we do!).

Also today, in the midst of darkness, there is this sense of Christ's grace being present among us, bringing us His light and His gift of hope.

Just in the last few weeks, there have been so many encouraging signs in the Catholic world.

For example, Alexander Tschugguel appeared on the international Catholic scene. A young man and convert, he became known for taking action against the Pachamama worship that took place in Rome during the Amazon Synod in October.

Many of us watched with near despair. But he just quietly removed the wooden idols from a Catholic church in Traspontina. He thus opened the door for a new movement, a movement that will not stand by and watch as the Catholic faith is being undermined and destroyed. Alexander Tschugguel also did not wait long for his next initiative: when Cardinal Christoph Schönborn gave permission for a homosexual activist to host a concert at St. Stephen's Cathedral in Vienna – which was giving the stage to the transvestite singer Conchita Wurst – Tschugguel rallied some 120 Catholics to pray in front of this cathedral during the concert.

So this hour of grace is especially the hour of the laity. We are taking back our Church. The laity have had enough of those dubious representatives of the Catholic Church who are allowing, fostering, and promoting sacrilegious and scandalous events that are objectively offensive to God.

I would even call it the Tschugguel Effect when everywhere the laity starts saying now: “Enough is enough. You have distorted the Holy Mass, you have taken away the Communion rails in our churches, you refused us when we wished to receive Communion on the tongue. You have profaned our churches, removed the saints’ statues and devotions. And you have distorted the Catholic truth, and, worst of all, you have scandalized and abused our own children with sexual abuse.”

We take our churches back. We demand that we be taught the full Catholic faith for the sake of our salvation and that of many others. Or, as Alexander Tschugguel told Dr. Taylor Marshall about the recent concert at St. Stephen's Cathedral: “This won't happen again.” At a recent question and answer event organized by LifeSiteNews, Tschugguel also said something else that is very important: this Pachamama scandal in Rome “woke us up [in Europe] from a very long sleep.”

And he now will try to organize a resistance in Europe.

He also related to Dr. Marshall how, within days, many priests who only celebrate the Novus Ordo Mass told him personally and privately that they have decided now to learn the Traditional Latin Mass.

There are so many other signs of hope now. Let us consider a recent article by Austin Ruse, in which he describes the “magic of the altar rail” and how, not long after his parish priest in Northern Virginia re-introduced it, the parishioners started all receiving Our Lord while kneeling, and on the tongue!

Or, let us consider Deacon Nick Donnelly's recent interview with Gloria.tv, in which he describes his own development in matters of the faith. He says: “After fifty years of the Novus Ordo the Traditional Latin Mass has become unfamiliar to me. One of the benefits of the Bergoglian [Francis] pontificate has been my rediscovery of the richness and beauty of Latin in my reaction against the resurgence of 1970’s banality. My wife and I have learnt to pray the Most Holy Rosary in Latin and I’m learning about the Latin Mass from a children’s book from the 1930’s. I now always receive Holy Communion kneeling down and on the tongue no matter what Mass I attend. Bishop Athanasius Schneider has been a great influence on me.”

Yet another encouraging report comes to us from Italy, from the learned and courageous Don Nicola Bux. In a recent interview, he spoke about his observation during his travels in Italy and in foreign countries “that the movement of Catholic Tradition is not to be stopped anymore – everywhere, in the large as in the small centres.” He adds that the faithful “recognize” how to differentiate Catholic truth “from error and heresy,” and they respond “by coming together and returning to Catholic Tradition which has been preserved in the catechism and in the liturgy.”

Last, but not least, we heard just a few days ago the sounding voice of Archbishop Carlo Maria Viganò, who speaks up against the novelties and methods of Pope Francis as clearly as ever. Here, we have a prelate who states: “Material heresies, formal heresies, idolatry, superficiality of every kind: the Supreme Pontiff Bergoglio never ceases stubbornly to humiliate the highest authority of the Church.” He speaks of heresy in the context of the Francis papacy. And then Viganò refers back to the work of the modernists, “the conciliar disaster of the Novus Ordo Missae,” and even the Second Vatican Council when he says:

“For more than six years now we have been poisoned by a false magisterium, a sort of extreme synthesis of all the conciliar misconceptions and post-conciliar errors that have been relentlessly propagated, without most of us noticing. Yes, because the Second Vatican Council opened not only Pandora’s Box but also Overton’s Window [a range of acceptable ideas], and so gradually that we did not realize the upheavals that had been carried out, the real nature of the reforms and their dramatic consequences, nor did we suspect who was really at the helm of that gigantic subversive operation, which the modernist Cardinal Suenens called ‘the 1789 of the Catholic Church.’”

Resounding Alexander Tschugguel's words at the beginning of this reflection, Archbishop Viganò also displays a sense of determination and readiness for the battle when he states, “Now it is our turn! The triumph of the Immaculate Heart of Mary — Coredemptrix and Mediatrix of all graces — passes through her ‘little ones,’ who are certainly frail and sinners but are absolutely opposed to the members enlisted in the Enemy’s army.”

Yes, let us be in Mary's Army!

Let us take joy that so much truth is being spoken these days, that new voices are being added to the ongoing witness of faithful Catholics – such as the 26-year-old convert Alexander Tschugguel – and that the movement goes toward the sacred, the awe, and the honoring of God and His Mother. This wave does not come from us. It is a gift from God who plants the seeds of truth and who raises the faithful who then may become His instruments of grace.

Therefore, let us again have joy that a Child is born unto us, into a world of darkness. And this Child is still the King of this world, Christ the King.

Yes, in light of these developments, we do not feel abandoned. We feel Christ's light coming into our midst, and this will surely give us a special resonant gratitude this year when we hear once more the song:

“Long lay the world in sin and error pining, 'til He appeared and the soul felt its worth. A thrill of hope, the weary world rejoices for yonder breaks a new and glorious morn. Fall on your knees, o hear the Angel voices!….”