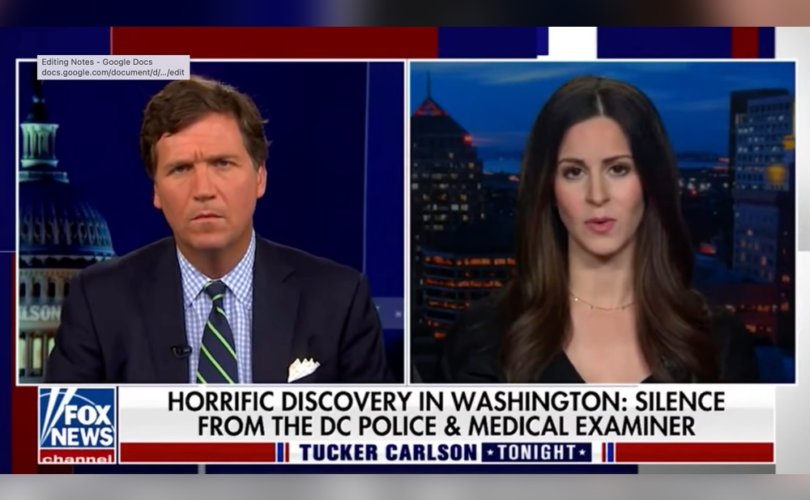 WASHINGTON, D.C. (LifeSiteNews) – Speaking to Tucker Carlson on Thursday, Live Action President and Founder Lila Rose demanded an investigation into the five late-term babies whose bodies pro-life activists recovered from Washington Surgi-Clinic, where abortionist Cesare Santangelo practices, noting the children may have been victims of the illegal partial-birth abortion procedure or born alive and left to die.

In total, pro-life activists with Progressive Anti-Abortion Uprising said they rescued 115 aborted babies. The group gave the earlier-term babies to a Catholic priest for a burial.

Rose said Santangelo “should be behind bars” for allegedly breaking federal law. The Live Action president compared Santangelo being able to allegedly get away with crimes for years to Philadelphia abortionist Kermit Gosnell who operated a “House of Horrors” for three decades before going to prison after being convicted of murdering three babies outside their mothers’ wombs.

“There may be federal laws that were violated here, laws that prohibit partial-birth abortion, laws that prohibit leaving a born-alive infant to die,” Rose told Tucker Carlson. In 2013, Santangelo told an undercover Live Action investigator he either wouldn’t provide or would actively avoid providing life-saving care to a baby who survived an abortion.

“This is happening in full sight of the authorities, and yet no action has been taken,” Rose said. She explained how abortionists get away with potential legal violations.

“It’s the incredible dishonesty of media that is working to protect abortionists here,” she said. “The killers of human beings, children who deserve love and to be held, instead of be thrown away like medical waste, and media is covering for them, authorities are covering for them.”

She began the show by reiterating how Santangelo and his facility allegedly killed almost full-term babies.

“It’s devastating. The five children whose remains are in the possession of the D.C. police and the D.C. Medical Examiner’s Office – nearly all of them appear to be viable,” Rose told Carlson. “One boy appears to be almost full-term – this beautiful, intact little baby boy that was dumped in a medical waste bucket.”

READ: EXCLUSIVE: Pro-life hero raided by FBI speaks about the aborted babies she was trying to honor

“Tucker, one little girl estimated by experts who looked at the documentation of this little baby girl’s body, looked to be about 28 to 30 weeks old, old enough to survive outside the womb,” she said. “That little girl, her neck had been cut, her brain had been suctioned out and she had been thrown into a medical waste bucket as well.”

“One little girl [who was] maybe 28-weeks old as well was dismembered, possibly well alive, torn into pieces,” Rose said.

“It’s devastating, and that’s why these activists and Live Action and others are calling on D.C. police to investigate.”