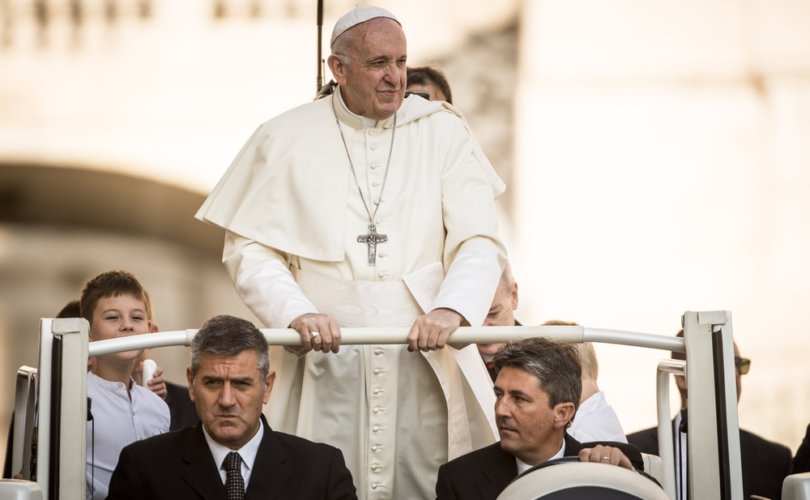 ROME, June 17, 2019 (LifeSiteNews) — The Vatican today released the working document for the Special Synod of Bishops on the Amazon, being held in Rome Oct. 6-27.

The 64-page document, which will form the basis of discussion at the upcoming Synod, suggests that local bishops’ conferences “adapt the Eucharistic rite to their cultures,” that the Church consider ordaining married “elders” to the priesthood, and that Synod fathers identify the “official ministry that can be conferred on women,” given their prominent role in Amazonian culture.

The document also suggests that it’s time to reconsider “the notion that the exercise of jurisdiction (power of government) must be linked in all areas (sacramental, judicial, administrative) and in a permanent way to the Sacrament of Holy Orders.”

General structure of the working document

At a Vatican press conference today, the general secretary of the Synod of Bishops, Cardinal Lorenzo Baldisseri, offered an overview of the working document. Composed of three main parts, the Instrumentum laboris relies heavily on Pope Francis’s encyclicals Evangelii Gaudium and Laudato si’.

Part I, titled “The Voice of the Amazon,” is divided into four chapters on ‘life’, ‘territory’, ‘time’ and ‘dialogue’.

Part II, titled “Integral Ecology: The Cry of the Earth and of the Poor,” contains 8 chapters dealing with issues such as “extractivist destruction,” isolation, migration, urbanization, family and community, corruption, and integral health and education.

Part III, titled a “Prophetic Church in the Amazon: Challenges and Hope,” also contains 8 chapters and deals with topics such as the challenges of inculturation, the “celebration of faith,” the “organization of communities,” evangelization in the cities, ecumenical and interreligious dialogue, and the media.

Here below we offer readers a working translation of Part III, chapters 3 and 4, which contain the controversial passages (and others) noted above.

THE CELEBRATION OF THE FAITH: AN ENCULTURED LITURGY

“Evangelization with joy becomes beauty in the liturgy,

as part of our daily concern to spread goodness” (EG, 24)

124.  Sacrosanctum Concilium(cf. 37-40, 65, 77, 81) proposes that the liturgy should be inculturated among the indigenous peoples. Cultural diversity assuredly does not threaten the unity of the Church but expresses itsgenuine catholicity and shows forth the “beauty of her varied face”(EG 116). That is why “we must be bold enough to discover new signs and new symbols, new flesh to embody and communicate the word, and different forms of beauty which are valued in different cultural settings…” (EG 167). Without this inculturation, the liturgy can be reduced to a “museum piece” or the “property of a select few” (EG 95).

125. The celebration of the faith must take place through inculturation so that it may be an expression of one’s own religious experience and of the bond of communion of the community that celebrates it. An inculturated liturgy will also be a sounding board for the struggles and aspirations of the communities and a transforming impulse towards a “land without evils.”

126. The following should be kept in mind:

a)  A process of discernment is needed regarding the rites, symbols and styles of celebration of indigenous cultures in contact with nature, which need to be integrated into the liturgical and sacramental ritual. It is necessary to be attentive to grasp the true meaning of symbols that transcends the merely aesthetic and folkloric, especially in Christian initiation and marriage. It is suggested that the celebrations should be festive, with their own music and dances, using indigenous languages and clothing, in communion with nature and with the community. A liturgy that responds to their own culture so that it may be the source and summit of their Christian life (cf. SC 10) and linked to their struggles, sufferings and joys.

b) The sacraments must be a source of life and a remedy accessible to all (cf. EG 47), especially the poor (cf. EG 200). We are asked [it is necessary] to overcome the rigidity of a discipline that excludes and alienates, and practice pastoral sensitivity that accompanies and integrates (cf. AL 297, 312).

d) In accordance with a “sound ‘decentralization’” of the Church (cf. EG 16) the communities request that the Episcopal Conferences adapt the Eucharistic rite to their cultures.

e) The communities ask for a greater appreciation, accompaniment and promotion of the piety with which the poor and simple people express their faith through images, symbols, traditions, rites and other sacramentals. All this happens through community associations that organize various events such as prayers, pilgrimages, visits to shrines, processions and festivals celebrating the patron saint. This is evidence of a wisdom and spirituality that forms a real theological locus with great evangelizing potential (cf. EG 122-126).

THE ORGANIZATION OF THE COMMUNITIES

from your own local realities and from your organizations”(Address of Pope Francis, January 19, 2018)

The cosmovision of the natives

127. The Church must be incarnated in the cultures of the Amazon that have a pronounced sense of community, equality and solidarity — and that is why clericalism is not accepted in all its guises. The native peoples have a rich tradition of social organization where authority is rotational and has a deep sense of service. Given this experience of organization, it would be opportune to reconsider the notion that the exercise of jurisdiction (power of government) must be linked in all areas (sacramental, judicial, administrative) and in a permanent way to the Sacrament of Holy Orders.

128. In addition to the plurality of cultures in the Amazon, distances generate a serious pastoral challenge that cannot be solved by mechanical and technological means alone. Geographical distances give rise to cultural and pastoral distances which; it follows that a “pastoral ministry of visiting” needs to give way to a “pastoral ministry of presence.” This requires the local Church to reconfigure in all its dimensions: ministries, liturgy, sacraments, theology and social services.

129. The following suggestions from the communities recall aspects of the early Church when it responded to needs by creating appropriate ministries (cf. Acts 6:1-7; 1 Tim 3:1-13):

a. New ministries to respond more effectively to the needs of the peoples of the Amazon:

1. Promote vocations among indigenous men and women in order to respond to the need for pastoral and sacramental care. Their critical contribution is in the movement towards an authentic evangelization from the indigenous point of view, according to their customs and traditions. It is a matter of indigenous people who preach to indigenous people with a profound knowledge of their culture and language, capable of communicating the message of the Gospel with the strength and effectiveness of those who have their own cultural background. It is necessary to move from a “Church that visits” to a “Church that remains,” accompanies and is present through ministers who emerge from its own inhabitants.

2. Affirming that celibacy is a gift for the Church, it is asked that, for the most remote areas of the region, the possibility be studied of priestly ordination for elders, preferably indigenous ones, who are respected and accepted by their community, even though they may already have an established and stable family, in order to ensure the Sacraments that accompany and support Christian life.

3. Identify the type of official ministry that can be conferred on women, considering the central role they play today in the Amazon Church.