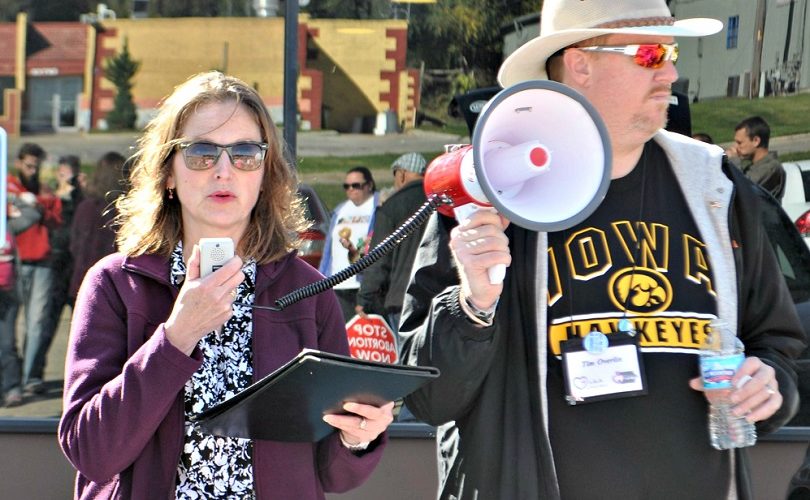 WASHINGTON, D.C., October 12, 2015 (LifeSiteNews) – Thousands of people rallied at dozens of locations nationwide – and in several nations around the world – on Saturday for the 2nd National Day of Protest Against Planned Parenthood.

At some of those rallies, LifeSiteNews reporters and staff were on the speakers platform, encouraging the faithful to keep waging the battle for the unborn.

“This is the most important fight of our day – to promote and protect everyone’s promise of life,” LifeSiteNews reporter Lisa Bourne told pro-life advocates in Des Moines, Iowa.

“Planned Parenthood is the nation's most prolific killer,” Bourne said.

Some even in the Roman Catholic Church accuse people who point this out of “not being pastoral enough,” she said. “But the truth is, that’s what they’re doing.”

Speaking in front of about 80 people in Silver Spring, Maryland, LifeSiteNews reporter Drew Belsky invoked another mass killer by likening the pre-born child to ancient Roman martyrs in the Coliseum.

“When the spectators put their thumbs down,” he said, “that meant 'swords down – spare this man.' In everything we do, we should be encouraging every woman who walks into one of these places to say, 'Swords down' – and, in the modern understanding, send a thumbs-down to” abortion.

Belsky also told abortion clinic escorts that “there are organizations for you guys, that can support you financially if you want to get out of this business. You don't have to stay here. There's no need for it. Because there is a moral evil going on.”

Siggins described the abortion industry's regular practice of using the cells of aborted babies in beauty products or feeding their corpses into incinerators.

He also spoke about Planned Parenthood's policy of sending underage rape victims back to their abusers and how the abortion giant has bilked state taxpayers out of millions of dollars of Medicaid overpayments.

This weekend's nationwide cluster of protestswas a follow-up to the first National Day of Protest, which was held on August 22. That event drew approximately 78,000 people in 354 cities across America.