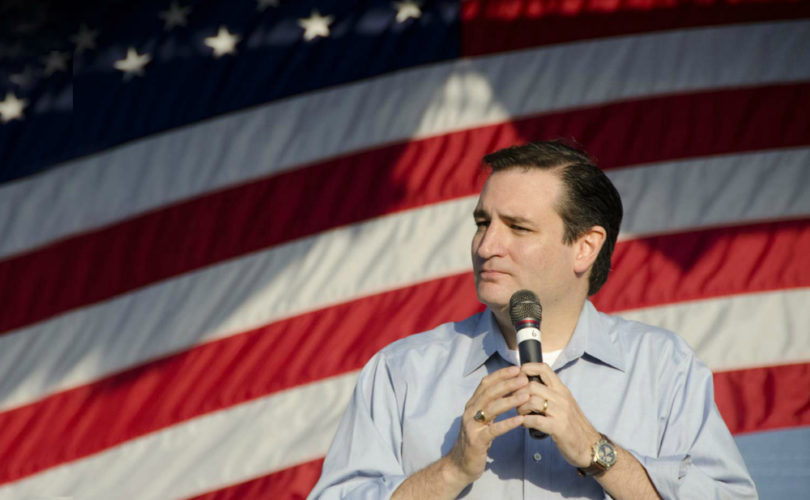 WASHINGTON, D.C., October 20, 2015 (LifeSiteNews) – He's far from impartial, but Sen. Ted Cruz, R-TX, believes that the nation should follow Texas' lead in defunding Planned Parenthood — and he promises, if he is elected president, it will.

Cruz praised a report yesterday that the state's Health and Human Services Commission (HHSC) would bar the local Planned Parenthood affiliate from receiving millions of dollars from the state Medicaid program.

“The state has determined that you and your Planned Parenthood affiliates are no longer capable of performing medical services in a professionally competent safe, legal and ethical manner,” the letter to Planned Parenthood Gulf Coast said, specifically citing undercover videos released by the Center for Medical Progress. The fifth CMP video shows a Houston Planned Parenthood official discussing the harvesting of fetal organs and tissue in exchange for money.

His words echoed those of state and national pro-life leaders, who saluted Texas' commitment to ending any taxpayer subsidy of the abortion industry while simultaneously expanding public financing of women's health care.

“I applaud the state of Texas for no longer allowing Planned Parenthood to receive Medicaid money,” said Lila Rose, the founder of Live Action, where CMP Lead Investigator David Daleiden got his start. “Texas’s inspector general concluded what Live Action’s investigations have shown for years: that Planned Parenthood has repeatedly neglected the minimum standards of care it is supposed to provide to clients; that it is not operating in a ‘safe, legal, and ethical manner;’ and that it is willing to put profits ahead of its clients.”

Reports that PPGC may be engaged in human body parts trafficking “is the latest abuse in a long line of abuses,” according to Rose, whose own investigations revealed Planned Parenthood officials were willing to accept money to abort minority children, turn a blind eye to statutory rape, and allow babies born alive during botched abortions to die.

“I encourage other states to show Planned Parenthood the same scrutiny that Texas has, because we know that these issues are certainly not limited to one region of the country,” she said.

“Despite Planned Parenthood’s tens of millions of dollars in advertising to get women through its doors and its claims that women won’t have other places to go if its taxpayer funding is cut, the reality is that low-income women in Texas – and all throughout America – have so many more choices than going to an unsafe and corrupt Planned Parenthood facility. In fact, there are over 13,000 federally qualified health care clinics that provide comprehensive and better care to women – on average, 20 clinics for every one Planned Parenthood facility,” Rose said.

Current proposals to defund Planned Parenthood at the federal level would divert funds the abortion provider receives to federally qualified health care centers, which critics say offer a broader variety of services without the moral and legal baggage of performing abortions – and possibly profiting from the sale of aborted babies' body parts.

“We are pleased that Planned Parenthood will no longer be receiving these taxpayer dollars, while the Gov. Abbott and the Texas legislature are funding women's health services at historically high levels through thousands of better providers,” Pojman said.