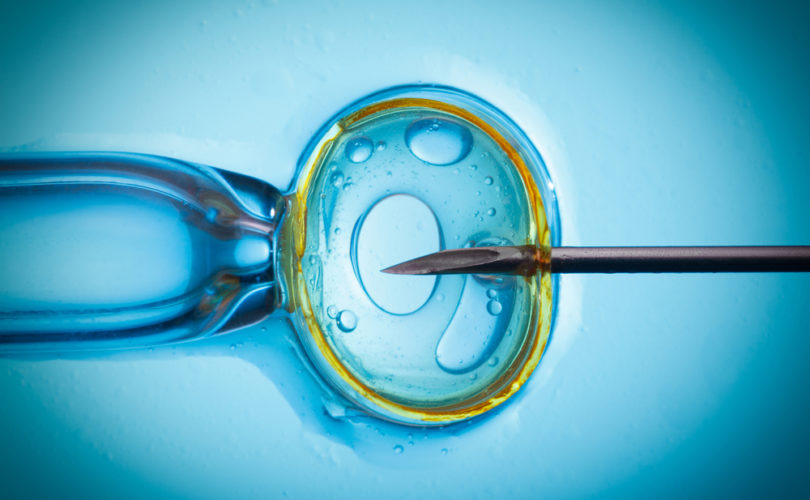 By injecting animal embryos with human stem cells, scientists can create “chimera” hybrids, which can then be used to learn more about human illnesses.

By creating and nourishing these beings, letting the hybrid embryos develop into fully grown animals with human cells and organs, scientists can then use the human/animal for experiments, ostensibly to learn about and treat diseases.

Researchers say they might be able to breed sheep, pigs, and cows with human hearts, kidneys, livers, pancreases, and other organs for human transplantation. Pushing the ethical envelope even further, the NIH says creating animals with human sperm and human eggs in order to study human development and infertility is a possibility.

William Saletan of the Washington Post, in a cautionary article titled, “Making Manimals,” explained, “The more you humanize animals, the better they serve their purpose as lab models of humanity. … It’s the future of medicine.”

Proponents of the research say federal tax dollars are needed to advance scientific understanding and treatment of diseases such as diabetes, Alzheimer’s, and Parkinson's.  They add that for decades scientists have been putting human tissue into animals, such as implanting human tumors in mice to experiment with drugs to effectively treat cancer.

Critics say creating a species of partially human “chimeras” is inhuman, unethical and immoral. The NIH, recognizing those concerns, proposes certain restrictions and an additional level of external oversight for chimera research.

The NIH limitations, however, do not satisfy critics, who say implanting tumors in mice is a far cry from creating a new, animal/human hybrid creatures. For instance, the brains of these animal/humans, they charge, may induce a “humanlike state of sentience.”

As National Public Radio reported, “Animals that have partly human brains” may be endowed “with some semblance of human consciousness or human thinking abilities.”

New York Medical College biologist Dr. Stuart Newman decries such animal/human experimentation, calling it “a Pandora's Box.” “You're getting into unsettling ground that I think is damaging to our sense of humanity,” he said.

“Pigs with fully human brains. Humans with animal brains that would be used for research or body parts. Who knows?” Dr. Newman speculated. “I think that we just can't say, 'Since it's possible, then let's do it.'”

Dr. Robert George, McCormick professor of jurisprudence at Princeton University, told LifeSiteNews, “Once again, they want to do what we were told 'no one will ever want to do.' Do you remember when we were told that scientists working with stem cells wanted only to use 'spare' embryos left over from IVF efforts that would otherwise die or be left in permanent cold storage?  No one, we were told, was proposing to create embryos by cloning or other methods for experimentation in which they would be exploited and destroyed. That would be unethical!”

“Of course, in no time flat the demand shifted to research embryos to be created by cloning in order to avoid the luck of the 'genetic lottery' and control the genetic makeup of the embryonic stem cells,” said Dr. George, a former member of the President’s Council on Bioethics.

“We were also told that no one wanted to create human-animal hybrids. Now that is precisely to be demanded,” Dr. George pointed out. “Anyone who can’t see a pattern of dishonesty here just doesn’t have his eyes open.”

Catholic Medical Association (CMA) President Dr. Lester Ruppersberger told LifeSiteNews, “Non-human animals are a valuable resource for medicine. However, there are compelling moral reasons to refrain from applying biotechnology to create chimeras or hybrid organisms that are partly human and partly nonhuman.” He emphasized, “Prevention of harm to humans is a moral mandate.”

As a matter of official stance, “The CMA opposes any chimeric and hybrid research and technology that fundamentally alters human nature as designed by God.”

Dr. Ruppersberger elaborated, “The CMA believes that a distinct moral boundary separates human from non-human animal life. This boundary is not definable by cognitive, physical or genetic criteria alone. This boundary was established by God when He created humankind in His image and likeness.”

“God granted humankind alone a spiritual nature and gave humankind responsibility and dominion over all the other creatures,” Dr. Ruppersberger explained. “We must respect the created and clear boundary between humankind and animals.”

Rod Dreher, a senior editor at the American Conservative, said creating partially human animals is wrong. “We are a perverse and wicked generation who deserves what we are going to get,” he predicted.

Dr. Ruppersberger did say his organization “endorses further evaluation to determine whether ethical chimeric and hybrid research and technology may benefit humankind, provided that these are safe, ethical, moral, and do not degrade the unique status of humankind and do not involve any tissue from human embryos.”

American citizens have one month to share their opinions about using federal funds to pay for creating chimeras for research. The NIH could start sending tax dollars to make “Manimals” as soon as early next year.

In 2000, Jody Bottum criticized the then-precedent-setting creation of a “pig-man,” created by inserting the nuclei of a human fetus into a pig's ovum. “Since the creatures are 3 percent pig, laws against the use of people as research subjects would not apply.  But since they are 97 percent human, experiments could be profitably undertaken upon them and they could be used as living meat-lockers for transplantable organs and tissue.”

At the time, Stem Cell Sciences CEO Peter Mountford, whose Australian company worked with the American company Biotransplant to create two “pig-men,” admitted that the creatures could have been implanted in a woman's uterus “to become a new kind of human.” But Mountford assured critics that doing so would be “ethically immoral, and it's not something that our company or any respectable scientist would pursue.”

Despite the 30-day public feedback period, both proponents and critics consider the lifting of the NIH's moratorium a done deal. As Dreher rhetorically asked, “Who is going to stand in the way of science over a trivial matter like basic human dignity?”