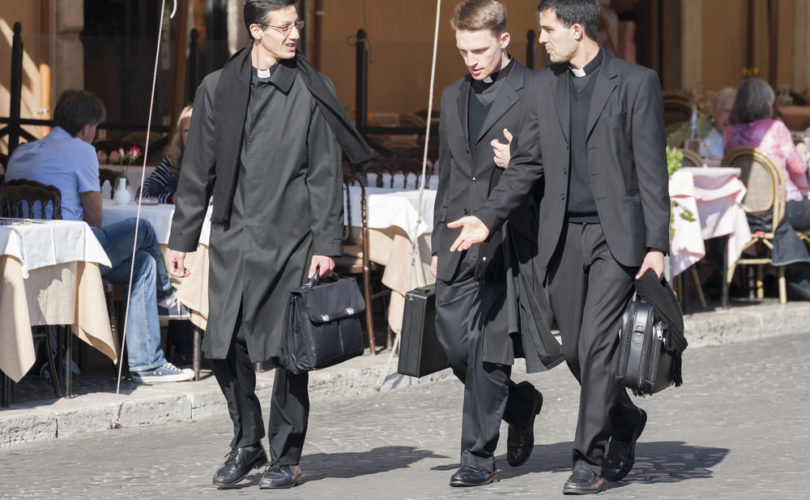 ROME, December 15, 2015 (LifeSiteNews) – On December 9, the well-respected and well-informed Vatican expert Sandro Magister suggested the theme that could very well become the next battle at the Synod of Bishops: married priests.

The Italian journalist gives several indications of why such a theme might be picked soon by the pope. The first indication he mentions is that Pope Francis appears inclined “to implement the agenda dictated in 1999 by Cardinal Carlo Maria Martini in a memorable statement at the synod of that year.”

In 1999, the Synod of Bishops was dedicated to the Situation in Europe and had as its title “Jesus Christ, Alive in His Church, Source of Hope for Europe.” As UCA News had then reported, Cardinal Martini – at the time archbishop of Milan (1979-2002) – proposed in his October 7 statement to the bishops that a new council should be convened: a “Third Vatican Council.” UCA News quotes Martini as saying that there “is the feeling that it would be good and useful for the bishops of today and tomorrow” to have a similar “experience of communion, of collegiality, and of the Holy Spirit which their predecessors had at Vatican II.” Among the themes which Martini had proposed should be discussed at such a future meeting were those “disciplinary and doctrinal knots” which had not yet been sufficiently dealt with, according to this prelate. More specifically, those themes to be examined included the following: an “ecclesiology of communion”; the position of woman in society and in the Church; the shortage of priests and the need for a sufficient number of ministers; and the need for more lay participation in ministerial responsibilities. As UCA News then reported, additionally:

Other issues include sexuality, the discipline of matrimony, the practice of penance, revival of ecumenical hope, relations with Orthodox Churches, and the relation between civil laws and moral law, and between democracy and values.

As Magister himself now recounts, Martini then expressed that he had a dream, namely, “that of a Church capable of getting into a permanent synodal state, with a 'collegial and authoritative exchange among all the bishops on some key issues.'” As the journalist also shows, several of those issues on Martini's “Dream List” have already been addressed, namely marriage and the question of sexuality. And Magister continues: “There is nothing to prevent, therefore, the 'key issue' of the next synod from being that which Martini put at the head of them all: 'the shortage of ordained ministers.'”

As one indication that Pope Francis will follow up on this key issue, Magister points to the South American desire – as proclaimed by the Brasilian Bishop Erwin Kräutler – to “make up for the shortage of celibate priests by also conferring sacred ordination on 'viri probati,' meaning men of proven virtue, and married.” According to Magister, moreover, Cardinal Cláudio Hummes, the retired Archbishop of São Paulo – and himself “a leading elector of Jorge Mario Bergoglio” – who also once headed the Vatican Congregation for the Clergy (from 2006 to 2010), now calls for a stronger adaptation to the indigenous culture of his region. Magister quotes him as saying that his own region should indeed “have an indigenous clergy as its guide. They have the right to this.” The expression “indigenous clergy,” as it is employed in this context, is interpreted by Magister as meaning a married clergy. Magister continues:

Rumor has had it this year that Pope Francis wrote a letter to Brazilian cardinal Claudio Hummes in support of a reflection on ecclesiastical celibacy and on the ordination of “viri probati.” Fr. Federico Lombardi has denied the existence of this letter. But, he added, “it is however true that the pope has invited the Brazilian bishops on more than one occasion to seek and propose with courage the pastoral solutions that they believe to be suitable for addressing the major pastoral problems of their country.”

Magister also reveals that Pope Francis plans to visit – in mid-February 2016 – a certain specific region in Mexico, namely Chiapas, in the vast diocese of San Cristóbal de Las Casas, in which the long-living local bishop had responded to the problem of the lack of priests by ordaining over many years (1959-2000) an overabundance – several hundred in fact – of indigenous married deacons. Although in the year 2000, Rome finally ordered a suspension of this practice and also banned the practice of calling these new married deacons “indigenous deacons,” as if they were a new kind of separate ministry in the Church, Pope Francis has now revoked this ban, says Magister. As of May 2014, new ordinations of married deacons were thus authorized by Rome for this troubled region. In light of these developments, the Vatican expert now concludes:

But there’s more. It is now certain that on his next intercontinental journey, to Mexico in mid-February, Francis will make a stop in none other than Chiapas, in San Cristóbal de Las Casas. Receiving last February 10 at Santa Marta twelve priests, five of whom have left the ministry to get married, when asked about it Francis replied: “The problem is present on my agenda.”

Magister's report thus reveals the importance of Cardinal Carlo Martini and his ideas for the current pontificate. Cardinal Martini himself – who died in 2012 – had been widely known for his own liberalizing attitudes toward most of the Church's moral teaching. For example, an article of the Spanish newspaper El Pais had reported in May 2008 that, in his book Night Conversations with Cardinal Martini, Martini was calling for a thorough and fundamental reform of the Church. In that book, according to El Pais, Cardinal Martini had also put into doubt the celibacy of the priesthood, promoted the use of condoms and still argued against the 1968 encyclical Humanae Vitae of Pope Paul VI which forbade the use of artificial contraception. Moreover, Martini then also insisted that he had never ever had the idea of judging and condemning his friends of high social standing who were practicing homosexuals. Importantly, he raised two themes that seem to be on the current pope's mind these days: Luther and married priests. As El Pais says: “By praising the protestant reformer Martin Luther, the cardinal [Martini] invites the Catholic Church to discuss 'ideas' going even as far as discussing the possibility of ordaining 'viri probati' (married men who are proved to be strong in the Faith) and women.”

Magister himself must be quite aware of all these statements by Martini, inasmuch as he also says in his above-quoted recent 9 December article, as follows: “And already there are some who can see another step ahead: that Francis would bring back into discussion not only the celibacy of the clergy, but also the ban on the sacred ordination of women.”

On the question of clerical celibacy, Father Joseph Fessio, S.J., founder of Ignatius Press, explained the Roman Catholic perspective in an e-mail to LifeSiteNews:

The frequently heard statement that priestly celibacy is “not doctrinal but only disciplinary” is not only misleading; it is false. False because there is no Cartesian bright line between doctrine and discipline.

There is a very variegated spectrum between “only doctrinal” (e.g., the two wills in Christ) and “only disciplinary” (e.g., the length of fast required before receiving Holy Communion). Clerical (note: I didn’t say “priestly” because it applies to all three degrees of clergy) celibacy is much closer to doctrine than to discipline on this spectrum.

All the psychological and sociological reasons are secondary. That doesn’t mean they are unimportant. It’s by definition impossible to give oneself totally to a family and to the Church.

The fundamental reason is Christological. A priest has expropriated himself to be united in a unique way to Christ the High Priest. The priesthood is not merely a function. It is a sacramental, ontological, mysterious union with Jesus Christ. And Christ the High Priest is more than a model—but he is at least that. Christ did not marry an individual woman because he is also the Bridegroom who is totally surrendered to his Bride the Church in a fruitful union that brings forth his Body the Church.

And if I may douse with some very chill water on some of the overheated enthusiasms of those clamoring for a return to “primitive tradition”, I remind that all those “married priests” in the early Church had to have the agreement of their wives and make a vow of continence before they could be ordained. So…all you viri probati…step right up.