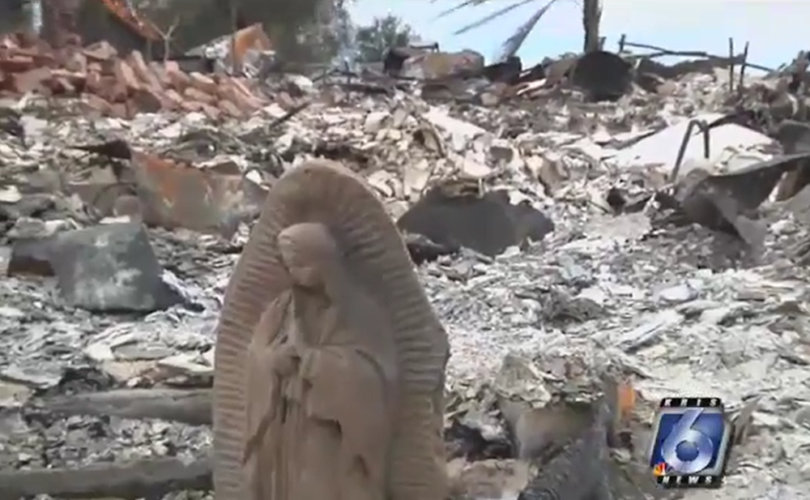 ROBSTOWN, Texas, August 29, 2017 (LifeSiteNews) – A statue of the Virgin Mary was the only item to withstand a devastating fire that destroyed three Corpus Christi-area homes during Hurricane Harvey.

The homeowner noted the significance of a holy statue of the Blessed Mother remaining standing through the ongoing disaster.

As Harvey tore through the Coastal Bend, a family home in Robstown suffered a different kind of disaster https://t.co/a2ydt8FLCt pic.twitter.com/exBcI2Ow7Y

“Some may blame God and some may blame the hurricane, but the only thing standing were holy things,” Natali Rojas told local NBC affiliate KRIS. “As you can see, this statue is the only thing that survived. I dug in there for things and all I found is a Virgin Mary.”

The Rojas family prepared their homes and evacuated as Harvey approached. But an electrical fire broke out in one of the houses when the storm hit, and the category 4 hurricane’s high winds caused the fire to spread to all three on the property before firefighters could respond. All three homes were completely destroyed.

Search and rescue has continued around the clock, and officials have said it will be some time before the full extent of the storm’s destruction and resulting fatalities are known.

Natali's father, Jesus Rojas, was thankful that no lives were lost in the fire and stressed the importance of faith and family.

“I believe that throughout my life I've suffered a lot. We were migrants,” Jesus Rojas said. “We worked all of our lives in fields and trying to show our families how to stay strong, how to believe in God and keep everybody together as a family.”

“The first thing I thought is we would have died in here if we would have stayed,” she said. “We left, so we're alive and I just wish this wouldn't have happened.”

They thanked the Robstown Fire Department for doing all it could in an impossible situation and said it took courage for the firefighters to come out and try their best during the hurricane.

The appearance of the family’s Our Lady of Guadalupe statue as the sole item remaining among the rubble of their home in the middle of so much devastation provided a powerful image of hope.

“Appreciate what you have,” Natali Rojas said, “listen to the warnings, hug your children, and thank God for today and yesterday, and pray for a better tomorrow.”