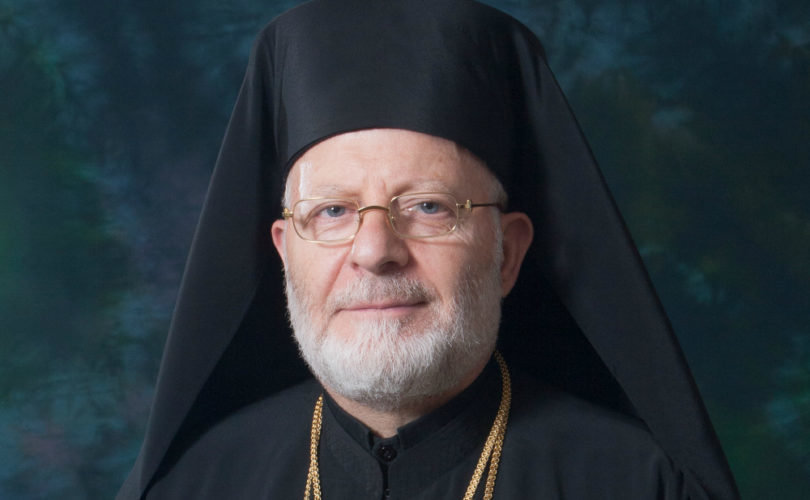 ENGLEWOOD, NJ, April 16, 2015 (LifeSiteNews.com) – A national leader in the Orthodox Christian Church has encouraged all Orthodox Christians in the United States to attend the March for Marriage on April 25 in Washington, D.C.

Metropolitan Joseph of the Antiochian Orthodox Christian Archdiocese has issued an encyclical to approximately 268 churches in North America, asking all the faithful to join the demonstration in the nation's capital supporting traditional marriage.

Metropolitan Joseph says that Orthodox participation in the march is needed “in order to dispel confusion which has been stirred up by our secular culture.” The Orthodox Church has always defined marriage as the union of one man and one woman and said that homosexual activity is a grave sin.

Starting at the National Mall in Washington, D.C., the March for Marriage is expected to gather tens of thousands of participants. The demonstration is timed to coincide with the U.S. Supreme Court hearing four new cases on same-sex “marriage.”

The Metropolitan's encyclical conveyed a strong sense of urgency. “We are clearly on the cusp of a historic Supreme Court decision that could mark a powerful affirmation of marriage between one man and one woman – upon which all major civilizations have flourished – or, it can initiate a direction which the holy Orthodox Church can never embrace.”

The bishop made a direct connection between participating in this year's March for Marriage and times in history when Christians have corrected society or changed culture for the better.  “Throughout the history of our faith, our holy Fathers have led the Orthodox laity to gather in unison to preserve the faith against heresy from within, and against major threats upon societies from without.”

American Christians, he said, “are in a unique position” of living “in a nation governed as a democratic republic. We still benefit from religious freedoms that would allow us to voice with clarity the Gospel message of Christ's love and the path to salvation.”

Legal observers agree that a ruling to redefine marriage would seriously impact religious freedom in the United States.

Metropolitan Joseph hoped that American Christians will make a strong showing at the annual event. “If we have several thousand attendees from the ranks of clergy, monastics, and laity at this peaceful rally, it would immediately be clear that the Orthodox Church is a leading voice for marriage in this nation,” the bishop wrote.

“We ask that you would make every effort to attend the rally, and encourage others to do likewise,” Metropolitan Joseph wrote in a special hierarchical letter addressed to Orthodox Christian faithful throughout the country. “A strong, vibrant, and clear message is needed from our Church…[for] the strengthening of family life. This is what our nation's people need to see.”

Reaction to the Metropolitan's strong stance has been positive. “Metropolitan Joseph is clearly emerging as the moral leader of Orthodox Christianity in America,” Fr. Johannes Jacobse, a priest in the Antiochian Orthodox Church and founder of the American Orthodoxy Institute, told LifeSiteNews. “This call to participate in the March for Marriage affirms that the Orthodox have a place in the public square.”

Metropolitan Joseph also praised the work of a group of priests and laity spearheading the Orthodox Christian role in the effort. The group, known as Crown Them With Glory, takes its name from a phrase in the Orthodox Church wedding ceremony.

It has set up a website with details on the march and explanatory articles on marriage and homosexuality.  The group is also sponsoring a gathering at the end of the march, where hundreds of Orthodox Christians are expected to pray for the nation to reject gay “marriage.”

The March for Marriage is organized by the National Organization for Marriage, which seeks to communicate the necessity of defending marriage as an exclusive union between one man and one woman. April 25 will be the third annual March for Marriage in Washington, D.C., and is set to take place within days of when the Supreme Court is expected to hear oral arguments to decide the national legal status of homosexual “marriages.”

Fr. John Whiteford, a Russian Orthodox priest and member of the group Crown Them With Glory, urged, “Come out in support of marriage between one man and one woman, modeled from our Lord's love for His Bride: the Church… Many priests believe it is time we had a national pan-Orthodox Christian movement… The Orthodox Church has preserved its timeless teachings on the sacrament of marriage, and, as a place of refuge, the Church offers healing through Christ for us all, boldly proclaiming a blessed path toward salvation.”

Fr. Stephen Freeman, a priest in the Orthodox Church in America, added, “This is the time for us to rise to the occasion. Amid such confusion over love, sexuality, gender roles, family life, we must make a reply for the sake of our children and our neighbor.”

“This is an emergency: a crisis,” he continued. “A response on our part is necessary and would be historic.”

He called a strong Orthodox Christian presence at the March “an opportunity to stand together in unity of voice as the Church: that is the stuff we were made for.”