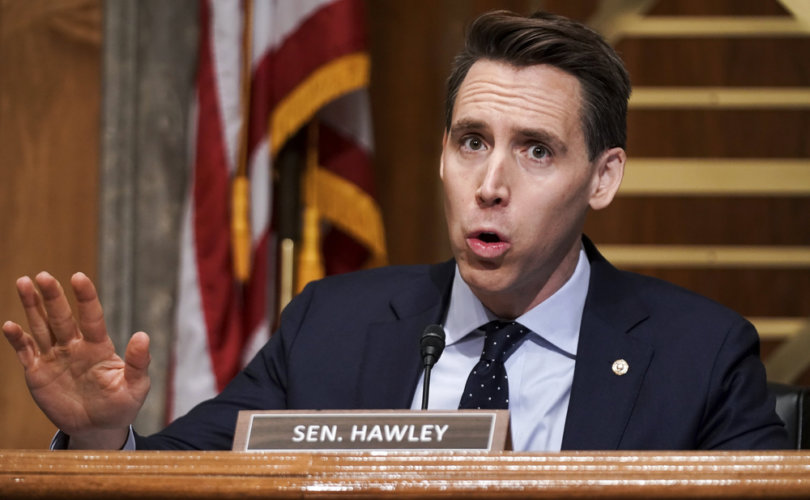 January 11, 2021 (LifeSiteNews) – American publishing company Simon & Schuster has decided to cancel the publication of Sen. Josh Hawley’s book “The Tyranny of Big Tech” due to what they describe as his “role” in the “deadly insurrection” at the Capitol on Wednesday.

“We did not come to this decision lightly,” the company explained. “As publisher it will always be our mission to amplify a variety of voices and viewpoints; at the same time we take seriously our larger public responsibility as citizens, and cannot support Senator Hawley after his role in what became a dangerous threat to our democracy and freedom.”

In his book, Hawley makes the case that tech giants like Facebook and Google threaten American liberties through their control of information.

Hawley explained, “At a time when these platforms are determining elections, banning inconvenient political views, lining politicians’ pockets with hundreds of millions of dollars, and addicting our kids to screens, I want to draw attention to the robber barons of the modern era.”

Rodney Anderson, current Dallas County Republican Chairman and former Texas House Representative described the move as “the absolute pinnacle of irony.” The rationale for the decision by Simon & Schuster is similar to that often used by Big Tech for censoring conservative speech.

Within a day of Twitter’s censoring of President Donald Trump because of a purported “risk of violence,” even as he called for peace, Simon & Schuster claimed that Hawley played a “role” in what they describe as a “deadly insurrection,” without specifying what role he played and what connection he had to violence.

NBC News noted that Hawley drew heated criticism from the left when he “became the first senator to announce he would object to the counting of Electoral College votes.”

Indignation towards Hawley reached a fever pitch after Hawley was photographed raising a fist in support of the pro-Trump protestors a few hours before the breaching of the Capitol.

Hawley gestured his support towards peaceful protestors well before the breaching of the Capitol, and Hawley stated hours later on Jan. 6, “The violence must end, those who attacked police and broke the law must be prosecuted.”

Despite his strong condemnation of law-breakers, many of his critics insisted he remained guilty of inciting pro-Trump protestors.

In comments to Simon & Schuster’s tweet announcing the decision to cancel Hawley’s book, a Biden supporter posted a photo of Hawley raising his fist, donning a photoshopped Nazi swastika and Hitler mustache, along with the reply, “You did the right thing [Sen. Josh Hawley] directly supported & encouraged a criminal attack on our Capitol & the overthrow of an election. Five people are dead, one a police officer. He’s unfit to serve in public office.”

You did the right thing. .@HawleyMO directly supported & encouraged a criminal attack on our Capitol & the overthrow of an election. Five people are dead, one a police officer.

Actress Patricia Arquette tweeted in response to Hawley’s call for an end to violence,

“They wouldn’t have had to risk their lives if you weren’t feeding disinformation to the angry mob. You are lucky and should get on you [sic] knees and thank God your colleagues were not murdered.”

They wouldn’t have had to risk their lives if you weren’t feeding disinformation to the angry mob. You are lucky and should get on you knees and thank God your colleagues were not murdered.

The basis of Simon & Schuster’s decision is so tenuous that Politico journalist Jack Shafer, while accusing Hawley himself of hypocrisy, admitted, “Compared to Trump’s invitations to incitement, Hawley’s were fairly anodyne.”

“It’s a shame that Simon & Schuster, a nonpartisan press that has welcomed writers and thinkers from across the political spectrum to help expand the scope of debate over the decades, chose this moment, when we need a deeper understanding of what people we don’t agree with think, to spike a book,” the Politico opinion piece continued.

“Whether Simon & Schuster did it because Hawley casts a temporary public relations shadow on its reputation or because some of its staffers don’t want to be associated with such a politician speaks poorly of the publisher’s commitment to open expression. If you’re a publisher and you fear controversy and flee from it on a few hour’s notice, you’re in the wrong line of work.”

Pending regulatory approval, Simon & Schuster will become part of Penguin Random House at some point this year, further narrowing down the number of major players on the publishing market.