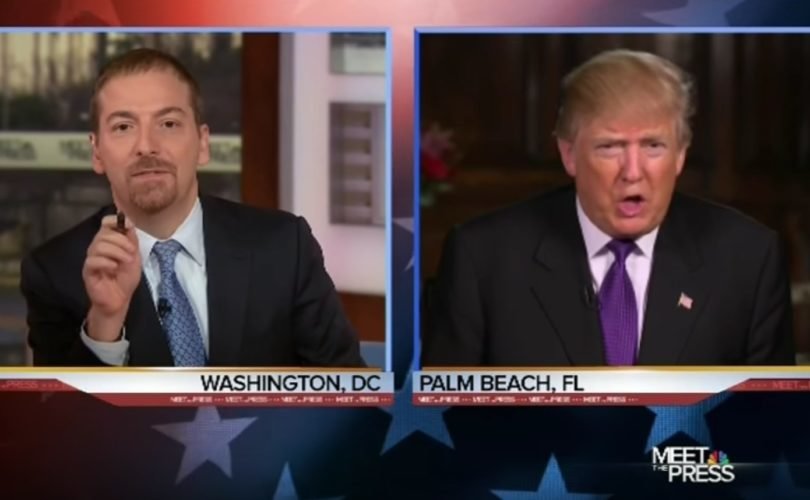 WASHINGTON, D.C., February 22, 2016 (LifeSiteNews) – Although Cecile Richards has admitted in sworn testimony before Congress that Planned Parenthood does not perform mammograms, the disproven rumor got a wide airing on one of television's most prestigious news programs on Sunday.

On “Meet the Press,” Donald Trump repeated his long-standing pledge to defund Planned Parenthood unless it entirely stops performing abortions.

NBC host Chuck Todd raised the fact that most of the government's half-billion-dollar annual subsidy to Planned Parenthood comes from Title X funding and Medicaid reimbursements for contraceptives and other services.

The notion that Planned Parenthood performs mammograms is a common misconception. While the abortion provider charges patients to perform manual “breast exams,” which women can perform on themselves at home, its offices do not perform mammograms.

“We do not have mammogram machines at our health centers, and we’ve never stated that we did,” Richards told Rep. Mia Love, R-UT, last October.

That contradicted a claim Richards made on national television in 2011, when she said if Planned Parenthood were ever defunded, “millions of women in this country are going to lose their health care access, not to abortion services, to basic family planning – you know, mammograms, cancer screenings, cervical cancer.”

The website FactCheck.org had ruled that the organization did not provide the cancer-detecting service in 2012.

But Live Action raised awareness by calling numerous Planned Parenthood facilities in a futile effort to schedule a mammogram.

Still, years later, the mainstream media continue to repeat the debunked notion that the service is available at Planned Parenthood's offices.

His remarks also implied that he believes abortion is more than three percent of Planned Parenthood's services.

“I would defund as long as they're doing abortions,” he said flatly.

His spokeswoman, Katrina Pierson, told CNN earlier this month that his campaign understands that, whatever the federal tax dollars may fund, “money is fungible.”